Download
You are using an out of date browser. It may not display this or other websites correctly.
You should upgrade or use an alternative browser.
Overview Updates (4) Reviews (2) History Discussion

snowcastle - 2cp arena in an old sleepy town in a perilous location.

Snowcastle (working title) is a small 2cp arena map set in a town surrounded by castle walls and cliffs. Lots of interconnected routes let players be sneaky, putting an emphasis on tactical gameplay and helping ensure rounds don't play the same every time.

Entry for the Connect 5 contest. I decided to put my previous payload entry on hiatus after I realized I would more likely finish a small map before the deadline.

-town flank is generally a viable place to hold but not the best to push from? not sure what to do about this beyond adding some health and ammo. it is pretty good for accessing mid if you go through castle, though going cliff from spawn gets you there basically just as quickly
-pushing through castle should be more effective, but inside of castle is kinda cramped and explosive boys (soldier, demo) can hold that area pretty easily. anything to make pushing through castle easier would be good i think (raise the balcony route exit by 32 units, adjust cover? maybe none of this is necessary because this thought is based on a single anecdote)
-pushing basement takes a while and isn't as effective as i thought because wow do people ever stack themselves on the point. another way to access basement might be good? idk
-basement is not a fun place to fight
-the route under point is basically useless for defense and impossible to get to as offense. maybe give offense a more covered way in? make the low balcony more covered in general?
-people really like sitting on the cliff overlooking point and thats bad maybe?? not sure what to do about this tbh. maybe make stairs up to that cliff a jump route so its more inconvenient?
-add some small cover for attacking the point head on from mainland (barrels or something. that tree is useless for attackers)
-more health or just distribute it differently? not many people use basement at all so idk what to do about that. point area is pretty contested so that sees a lot of use (move these pickups back a bit?). definitely add some health and ammo to town flank.
-move spawn further towards town flank? not sure how to do this without totally fucking up the current flow of the map. maybe make the doors to town flank larger/more inviting? maybe leave it as it is because people seemed to go that way once they learned the map. mostly just worried about how many people sit on the point because its kind of a very good position.
-was surprised by how uncontested the midpoint of the map was. expected people to push more but i think its scary how the town flank is pretty much right at the point. it probably plays fine as is - just not what i anticipated and now im a little uncertain how to evaluate how the map plays.

This was soooooo bloody fun to play today, my favourite map out of the lot and I can honestly see it being added to the game (hey, Byre got in so arena has chance).
I love the CP positioning, it's really fun and everything just flows really well.

I think that maybe the basement could have the healthkit moved more towards the centre to present a better point of contest (had a Scout melee duel down there today lel).
Last edited: Sep 9, 2018

The end of an era

Hido Ido, I got some revelations about things today.

First off, I am your brother, second off, I have feedback for Snowcastle. 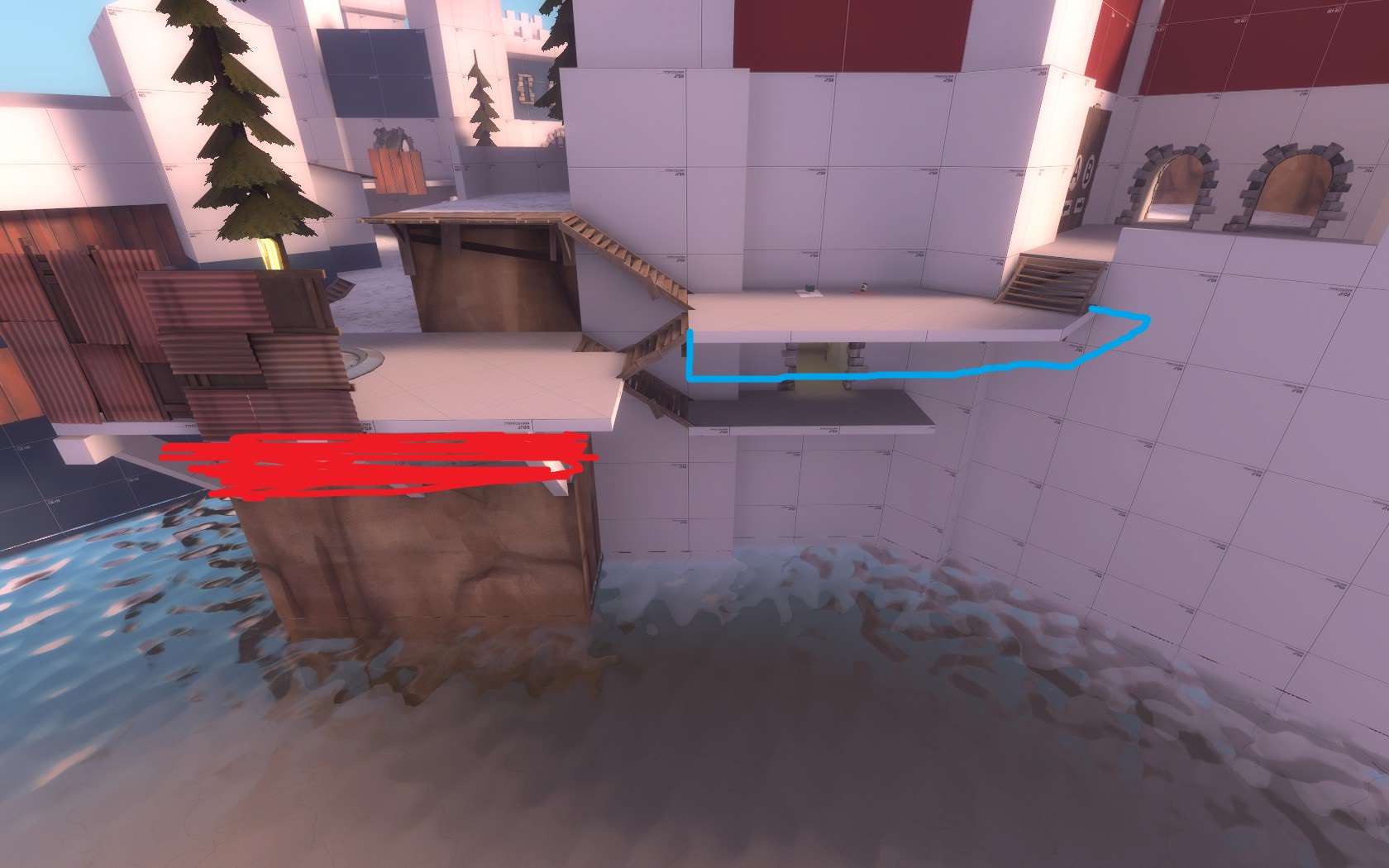 When the round was starting and the team went for the point to cap it real quick, I found that I was nearly being pushed off the ledge by my rude ass teammates either because they hate me healing them or the ledge is too thin, and I hope its the second. Also the ledge thing below the point was pretty much never used by anyone, and I think defending or attacking the point should be a bigger commitment with a bigger risk than people being able to ditch the fight just by dropping onto the little outcrop and running off. 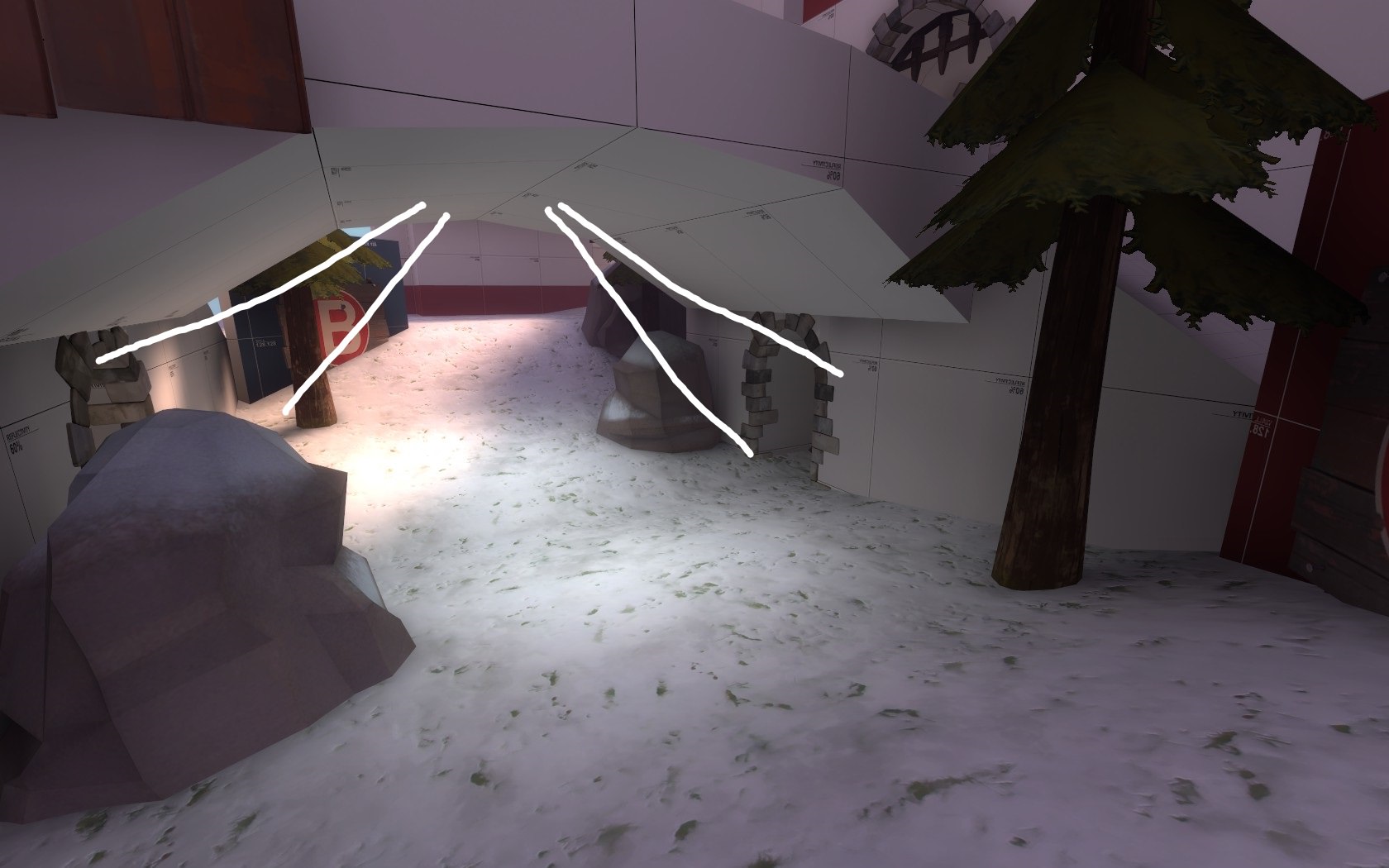 This is minor, but it took me a few games to even realize this route that goes from under the bridge to the point ledge even existed. Add some nice spotlights, because it would not only draw attention to the doors, but also look really cool when entering the door.

Idk, I like the walkway beneath the point leading to the basement. Feels good to me and connects parts of the map well + flank.

-adjusted cover near points. removed tree, added stack of props. aim is to make point easier to approach as a flank class from head on.
-also added a railing by the point to make countering the balcony attack route more of a commitment.
-added medium health to route under point to incentivize players to use it.
-moved health/ammo by point towards spawn.
-adjusted cover present in the castle to make attacking point a bit easier.
-adjusted lighting in basement and slightly moved health.
-added railing to balcony near point to make accidentally pushing off teammates more difficult.
-added small health/ammo to town route.
-moved tree/rock in town route a bit.
-reduced cover on mid bridge to create sightlines from castle to point.

Moonrat said:
First off, I am your brother, second off...
Click to expand...

That's crazy.
Toggle signature
it's hammertime my dudes
[Busy with school, so hammering has come to a pause.]

-changing the railing on point seemed to make the balcony a more viable attack route. easily counterable by players who know the meta but maybe thats okay.
-medium health under the point didn't seem to ever be an incentive to jump to the lower route, but that will probably only come into play very rarely. it being an inconvenient place to run to for a more major heal works pretty well.
-prop stacks by the point seemed to help make the play area more interesting.
-pyro seems really good? not sure if that was teams starting to stack pyro and nobody figuring out a good counter but both teams had at least four pyros and they were scoring well. maybe add more health??
-people don't use the middle enough. maybe health on the bridge could serve as incentive? or health in castle.
-health in basement might make using the ambush route too good. ambushers can easily retreat if spotted and the health gives them an advantage, which is annoying to try and counter. maybe change basement health to ammo instead.
Toggle signature
Finished: Steep - Byre - Snowcastle - Quarry - Exquisite Corpse
Current: Snowbase - Fountain - Dixie
Other: Ashpipe - Mom - Lovely - Idomay - Butterzone - Shaftworks - Aether - Aspen - Caboose
Guides: Instances - Composition - Structures - Feedback - Observer Camera Tool - VIDE
Portfolio Website - YouTube

-artpass
-changed all ammo packs to full ammo, except ammo by spawn, which is a medium
-added medium health to mid on bridge
-probably forgot some changes because im rushing this out the door
-probably forgot some essential things like soundscapes (definitely forgot) and some clipping (maybe forgot?)

oh i forgot that lel

Loving the feel of the storage basement. The selective lighting really works too.

Credit to Freyja for custom castle stone wall textures. They may be changed in the future and will likely be released when the map is done.

Toggle signature
Sometimes i wonder about if people really do like blue cheese...
You must log in or register to reply here.
Top Bottom