After years of mapping and a little bit of modelling, I have noticed something interesting.

First off, one day I learned that stair climbing ratios in the real world are the most comfortable when they follow the Golden Ratio. I quickly realized that the popular TF2 stair ratios of "2:3" and "1:2" are just simple approximations of the Golden Ratio.
Later I read up about the brothers of the Golden Ratio: The Metallic Means.
It took me a while after that, but after making a rather wide doorway it suddenly struck me: What if that doorway I'm making is using the Silver Ratio?
And long story short, I started measuring a lot more ratios in TF2. I ended up with this image: 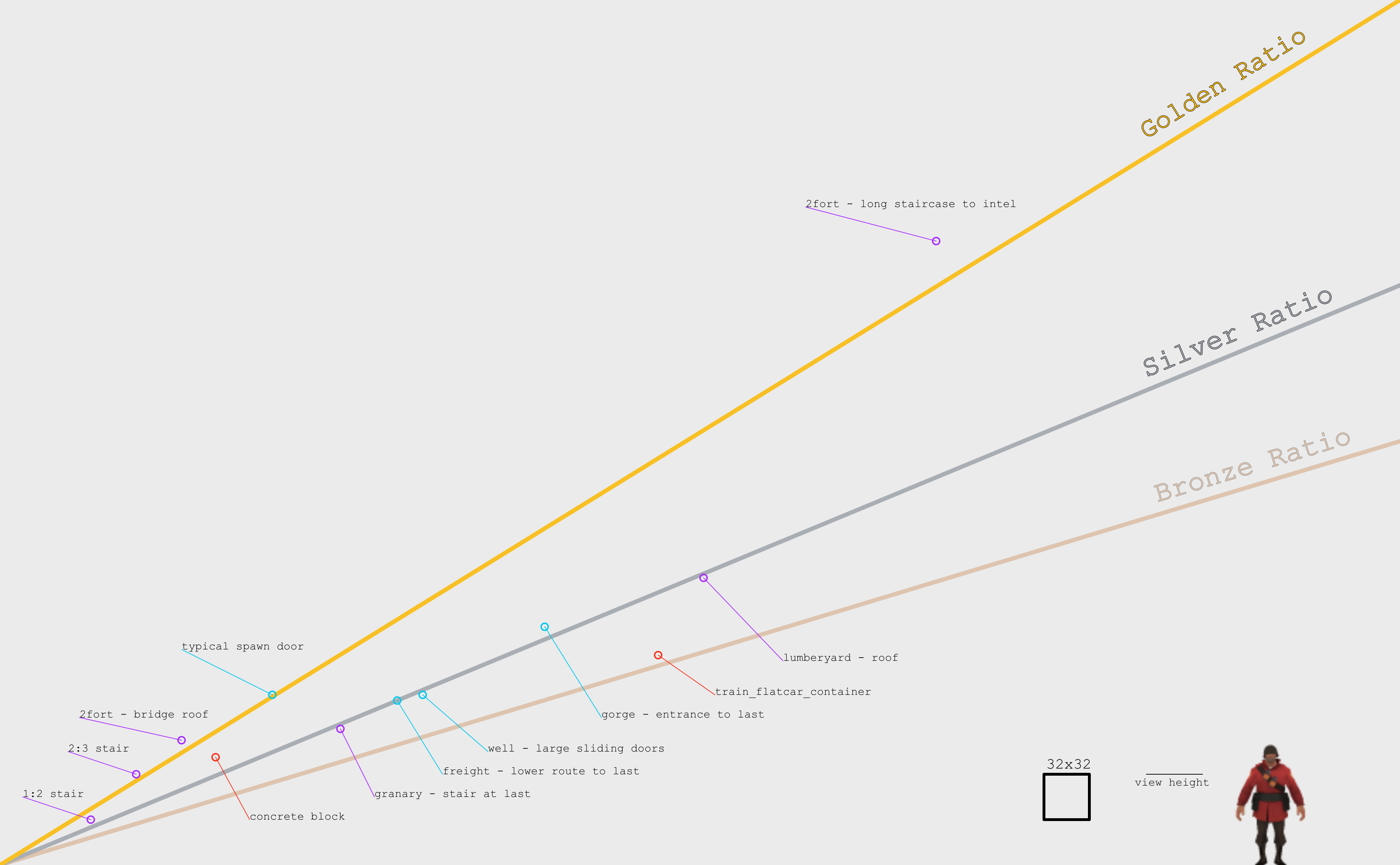 So what?
As I have mentioned before, stairs that follow the Golden Ratio are the most comfortable to use in real life. Besides, the Golden Ratio appears again and again in art because of how nice it is.
To me this means that whenever you want to make a stair, a doorway, or a rectangular object, try to stay close to one of these ratios. (Having a calculator nearby might be helpful!) This should keep things nice looking and nice feeling. Even if you aren't activly thinking about it, you will probably end up hitting one of these ratios rather well simply because of how good they look and feel.

Also, I didn't really talk about the most basic ratio of them all: 1:1
It appears rather often too, but it's too obvious, simple and boring to really talk about. However, this doesn't mean it's any less good!

It might also be important to talk about ramps and other things with an exremely shallow angle.
The Metallic Means are an infinite family of ratios. If I were to draw all of them, the difference between them would decrease rapidly to the point where it's just a mess of lines covering the screen.
So, when given a ratio which has a much larger number on the top than on the bottom, like 256:48, there's a much higher chance of it being very close to a Metallic Mean. Because of this, it becomes unneccessary to consider the ratio of a ramp that is barely going upwards.
Toggle signature
Check out my models! Such as: The St. Sampson Harbour Crane
/(' x ')\ ⌗ Avatar by Lacry

I've never read or been taught anything about applying the golden ratio to stairs. The two main rules of thumb for stair ratios that seem to get passed around are on this chart: 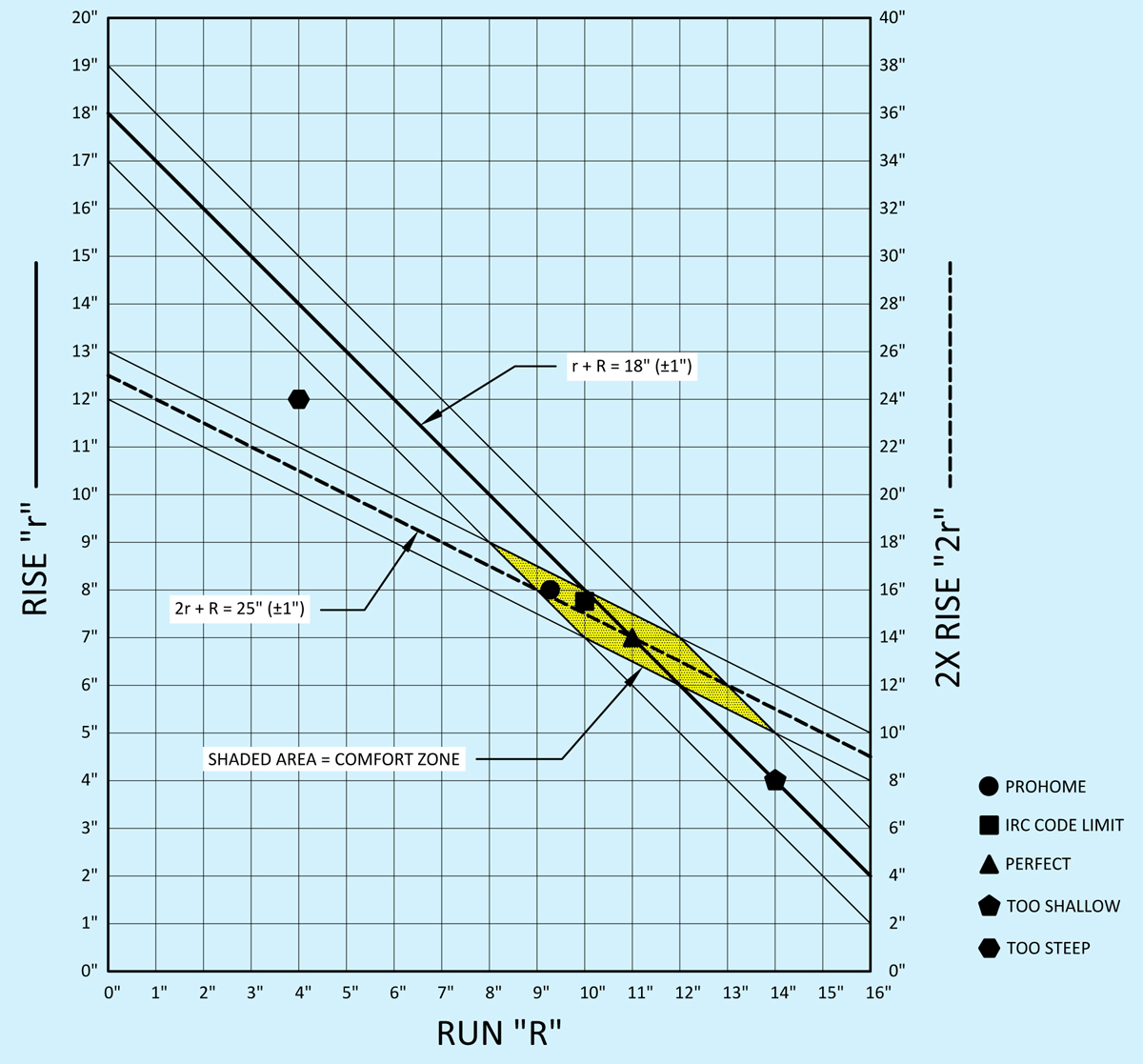 Handily, the lines of these two intersect at 7" rise and 11" run, which is both the max rise and min run for US stairs by code (outside of certain uses like Residential, which are more flexible). 8:12 is pretty close to 7:11 and fits nicely on the Hammer grid, and I think that's why Valve uses it.

(Also note: 6" rise 12" run isn't uncommon for stairs, meaning a 1:2 ratio is legitimate, although notably shallower and may appear strange in TF2 purely because of existing convention.)

There's a strange cult-esque following around the golden ratio and I'd be critical of whatever you read about it. It has applications in math and occurs in nature, but I think quite often people also want to believe they are seeing the golden ratio when really they are not - like the 2:3 and 1:2 ratios you've mentioned as being approximations of the golden ratio. Towards the lower left of your graph, it would be difficult to plot any points that don't approximately fall onto any of the lines you've drawn.
Toggle signature
Finished: Steep - Byre - Snowcastle - Quarry - Exquisite Corpse
Current: Snowbase - Fountain
Other: Dixie - Ashpipe - Mom - Lovely - Idomay - Butterzone - Shaftworks - Aether - Aspen - Caboose
Guides: Instances - Composition - Structures - Feedback - Observer Camera Tool - VIDE
Portfolio Website - YouTube
You must log in or register to reply here.
Top Bottom