King of the hill map set in a green farm land

KOTH Dale is a map set in the green farm lands somewhere in the USA.
Red and Blu are fighting over the midground between the more industrious Blu and more traditional Red. 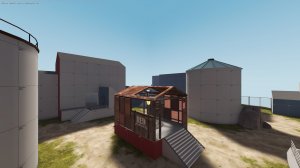 After years of lurking on the forums and couple years since my first gameplay map, I decided to give it a second go.

For that reason, the map isn't quite impressive, as gameplay has always been quite a hard topic to work on. More downloads from The Siphon