All gamemodes in TF2 benefit from having some back-and-forth gameplay.
In Attack/Defense, points which just involve one hold spot are severely flawed, because they either let BLU take the point after only one successful push, or RED respawns so fast that they're able to come back to the point and sweep BLU off it after any successful push, making the round drag out forever. Points tend to be much better when RED has their hold spot on the point, but also has another hold spot in front of that - this allows them to initially hold the forward spot, then when they get cleared out of that, they can hold the backward spot - if they win a fight in the backward spot, they get to hold the forward spot again, but if they lose a fight, they lose the point. This creates a "back-and-forth" dynamic where RED can lose and retake the forward spot fluidly and dynamically without worrying about losing the point, and it makes the point more fun and balanced for both teams.

KOTH's single point has a similar function in that teams who take the point will naturally push forward and begin to hold forward. However, KOTH needs to have this forward hold be hard to keep, and little to no possibility of a backward hold, because if it's too easy to hold the point, the first team to take it holds it for the whole round, meaning only one fight matters in the entire round, which is frustrating for both teams because they want to be rewarded for being skillful.

Making it easy for the attacking team to take the point after respawning has more benefits than just making the gamemode not horrible - it means that teams who take the point are rewarded if they can keep their forward hold (with great difficulty), but even if they lose the point, they still have the advantage attacking it again, so it's not such a serious disadvantage, but they can still lose if the enemy team keeps their newly won forward hold for long enough. In other words, it becomes fun and balanced for both teams.

So, how do you do this? Well, I've thought up several criteria to follow:

1) Health and ammo should be placed not in the point area, but in a "staging area" just before it.
Click to expand...

2) Players should be forced to stand on the point in order to see the enemy team's routes into the greater point area.
Click to expand...

3) Although attackers should have flanks into the point area, it should be difficult to use these flanks to get behind attackers and to their spawn.
Click to expand...

4) The forward hold of the team who owns the point should never occupy the enemy team's spawn area.
Click to expand...

5) It should be impossible for somebody on the team who owns the point to die, respawn and come back before the enemy team captures the point.
Click to expand...

What's that you say? "This image is of Product, not Viaduct"?
Yeah, and?

2) Players should be forced to stand on the point in order to see the enemy team's routes into the greater point area.
Consider a point area which is completely flat and has sightlines all the way across it, like on Nucleus.

This makes it really hard for attackers to approach the point, since the point area is symmetrical by nature, which means that defenders can shoot the attacking team with access to the same amount of cover and health that the attackers have, which makes team fights a brutal stalemate without any chance for either team to reach the point. This disproportionately favours the team who owns the point, because they're actively winning as long as the timer is ticking down, so what seems to be a stalemate is actively progressing towards the victory of the team who owns the point, with little that the attacking team can do about it.

3) Although attackers should have flanks into the point area, it should be difficult to use these flanks to get behind attackers and to their spawn.
To explain this, we can actually reuse the image of Product's staging area, or "lobby": 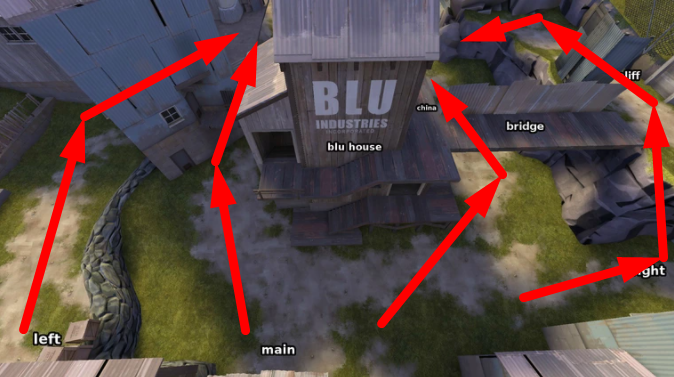 Too many KOTH maps that I see in imps follow the """""""Viaduct formula"""""""" and create three distinct routes from spawn, which are separated from each other until they reach the point. Of course, it's important to give the attackers options, but I'd argue it's actually far more important to make these routes converge into a single courtyard before the point, because otherwise the team who wins the fight at the point gets to go to the enemy spawn for free, and that sucks.
In fact, even Viaduct is pretty famous for letting people spawncamp via going down whichever route the attackers aren't using, usually the right side.

It's actually very hard to find an example of an official map that does this exceptionally well, or exceptionally poorly. If I had to give a general guideline, it'd be: "Make sure the connectors between spawn and the courtyard are very simple, and the team pushing out of spawn can always rotate between these connectors more easily than the would-be spawncampers."
Simpler is better. It makes it so that the team pushing out of spawn needs to spend less time flushing out solo members of the enemy team who're hiding in some corner in one of the connectors - time is money in KOTH!
Just don't make it so that every connector is a long sightline.

4) The forward hold of the team who owns the point must never occupy the enemy team's spawn area.
This is achieved simply through distance, and respawn times - these two factors dictate how far forward a team can move after they cap the point, before they run into the newly respawned enemy team. With Viaduct, the map's just a bit too small, and the respawn times too long, so the map suffers from spawncamping - this can effectively give the defending team two forward holds, slowing down the attacking team and giving the defenders the same kind of fluid back-and-forth defense A/D has, which can enable them to hold the point for three minutes with ease.

5) It should be impossible for somebody on the team who owns the point to die, respawn and come back before the enemy team captures the point.
Supposing that the attacking team breaks the forward hold of the defenders and starts to capture the point, you want them to be able to reliably finish capping before the defenders respawn and come back - if they can't, the defenders will have the advantage of health, ammo and cover, so they'll usually flush the attacking team off the point and continue holding. The longer the point takes to capture, not only do you increase your risk of the defenders being too easily able to come back, but you also reduce the effectiveness of the attacking team's forward hold that they'll get after capping the point, which will doom them to the fate of having the enemy team nearly always recapture the point before they could hold it for any reasonable amount of time, which is almost as bad as them never having capped at all. So, you want to make the point's cap time as short as possible without letting attackers backcap it with just a scout or other, similarly ridiculous scenarios - you also want the respawn times, and distance between spawn and the points to be as long as possible, but overdoing it tends to make it too easy for the defending team to set up two forward holds, which as we covered in the explanation of the previous criterion, makes it too hard for the attacking team to cap the point after respawning. In other words, you need to very carefully balance the cap time, respawn time and walk times of your map so that these two criteria are achieved.
-----------------------------------------
Beyond this, you can make any geometry that seems fun to play around as long as it encourages class balance, or experiment with very different point areas as long as they still follow these criteria, and you should have a pretty fun map.
Maps that I'd consider successful experiments are Harvest (tentatively) and Bagel - although Bagel has routes which bypass the point in the form of its two buildings, one building is easy for attackers to take and helps them a lot if they have it, while the other is hard for them to take - this combined with the cylinder on the point means that it's hard for attackers to stay alive on the point if the enemy team owns both buildings, but if the attacking team owns at least one building, it's easy for them to stay alive and take the point - so, it can become easier for the defending team to stall, but not for very long (if at all), and this whole dynamic occurs the same way for every push, so it acts as a forward hold that's balanced for both attackers and defenders.

What I'm trying to say is that you don't need to make every KOTH map exactly like Viaduct to make it good - there's plenty of variations you can play with, and undoubtedly some variations that work well which we haven't even discovered yet.


Edit 28/09/2021 - Added a fifth criterion (in between the former second and third criteria) to stipulate that flanks into the point area should not be used to get behind attackers.
Last edited: Sep 28, 2021
Toggle signature
I write guides:
[GUIDE] What makes a good KOTH map?
[GUIDE] Class Balance through Geometry
[GUIDE] How to make a good Attack/Defense map
[GUIDE] Navigating the Secret Dynamics of Single-Stage Payload​
You must log in or register to reply here.
Top Bottom