My entry into the 7.2 hour contest

This is my entry into the 7.2 hour contest.

I failed. I created a layout for a SD map. Then, yesterday evening, i started to panic because i didn't believe the layout could work. I drew up a new one and began blocking it out a few hours ago.
About 2 hours in, one of those setting up SD logic, i realized that in my tired state yesterday evening i made a mistake in my layout that would make it geometrically impossible to build the map as i drew it down. After everything was said and done to try to rescue the situation, i realized that both A - The Australium Zone was going to be really, really small and B - It could be reached from spawn in like 2-3 seconds.
So, after taking a short break, i decided to start over. I created a KOTH layout on the fly because i wouldn't have enough time left for anything else, and when i was happy, i began creating it in Hammer.
I made some fast progress, and with about 2 hours left in the contest, i was able to compile it for the first time.
Then it dawned on me that i for some reason fell back into my old habits and really, really underscaled the map.
It's not that the layout is bad, i even consider it to be quite good for the pressure i was under, it's just that almost every combat area is at least 50% to small. This isn't going to be much fun because there are pretty much no good lines of sight and not enough room for everyone to fight.

I contemplated just skipping over to the beer-drinking phase of saturday, but i didn't want to completely give up. I won't have enough time to fix the scale, so i completed the logic, the pickups etc. Now i have uploaded it and await judgement day. This isn't going to be pretty, but hey, i finished it.

I will probably "update" this map because i like the layout. And when i say "update", i mean completely redoing it on a correct scale. This is not the type of content i'm happy to create. 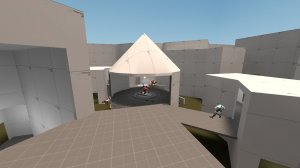