Red and Blu fight over control of a lighthouse on the Coast. 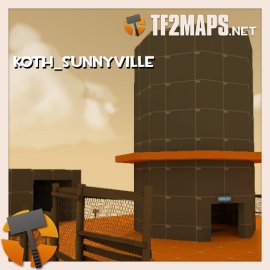 Here in good 'ol Sunnyville, a small town near a dried up lake in the Badlands, Red and Blu fight over control of a lighthouse on the Coast. 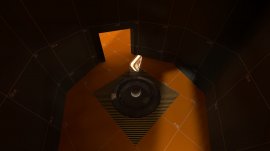 The lighthouse in the center holds the control point providing a vertical fight with an underground area to allow flanking. 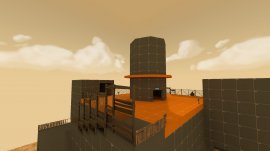 Soldiers and demos are fairly restricted height wise due to the open nature that a lighthouse requires, however the ceiling is high enough to allow cross map demo jumps and a small lip on the lighthouse provides a vantage point for rocket and demo spam. 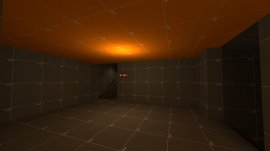 The underground is a fairly simple mine system (a couple ramps leading up with an enclosed arena at the crossroads) that provides a simple CQC (close quarters combat) experience while also providing solace from the chaos outside.

I need ideas for what to place in-between the spawn points and the upward hill to further reduce the sniper sightlines. Maybe the tree does a well enough job?