The RED and BLU corporations briefly joined forces in pursuit of scientific achievement, constructing this alpine base and developing new laser technologies. Inevitable corporate espionage led to both figurative and literal backstabbing, and the situation soon devolved into RED and BLU's more customary total warfare. Each lacks the complete blueprints needed to reproduce the new weapon, but the prototype may come in handy during the conflict.

Make sure you enter it to a gameday once they reappear

Love the generator in screenshot #1.
Toggle signature
Sure i'll do something :/ If you need anything doing ask.
H

I like the big intel rooms. CTF maps with small ones (2fort/sawmill) play poorly imho.

One questions, where are the spawns?

It looks pretty, but does it play well?
It seems fairly open. Not just sniper sightlines but you've got to realise that all classes need cover to reaload and hide.
Also, make your water a scale of 1.
Other than that, keep up the good work!

HeaH said:
Make sure you enter it to a gameday once they reappear
Click to expand...

Will definitely do that.

One questions, where are the spawns?
Click to expand...

I hope the big intel room works out. That was the first part of the map I built (this map has grown organically rather than having a clear design from day 1. Chalk it up to my inexperience).

The spawns are on the left side of each intel room, on the upper level. So there's a spawn exit directly into the intel area, as well as a spawn exit that leads onto the 'battlements' outside (left side of screenshot #2). Direct access to the intel room from the defenders is intended to counter the short capture distance (about 25 seconds for a scout) and the wide-open intel with multiple entrances. The intel area has three entrances: front, roof (where the grate is hanging down), and back tunnel (right side of screenshot #4).


Aly said:
It looks pretty, but does it play well?
It seems fairly open. Not just sniper sightlines but you've got to realise that all classes need cover to reaload and hide.
Also, make your water a scale of 1.
Other than that, keep up the good work!
Click to expand... 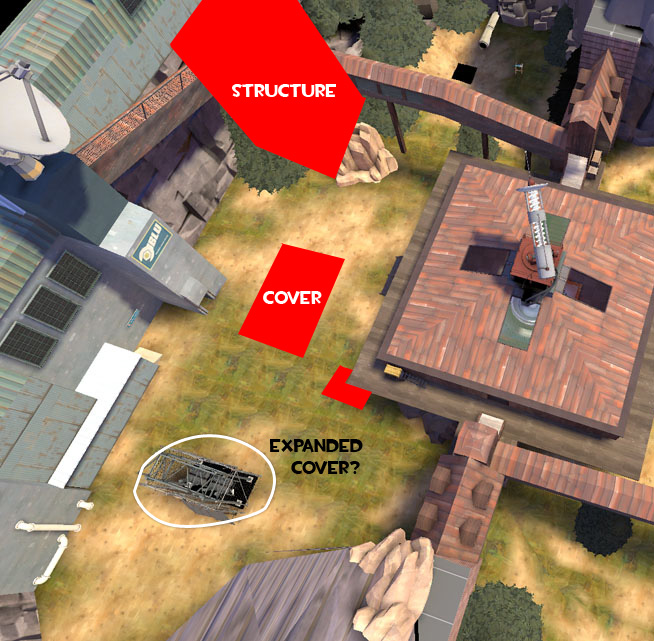 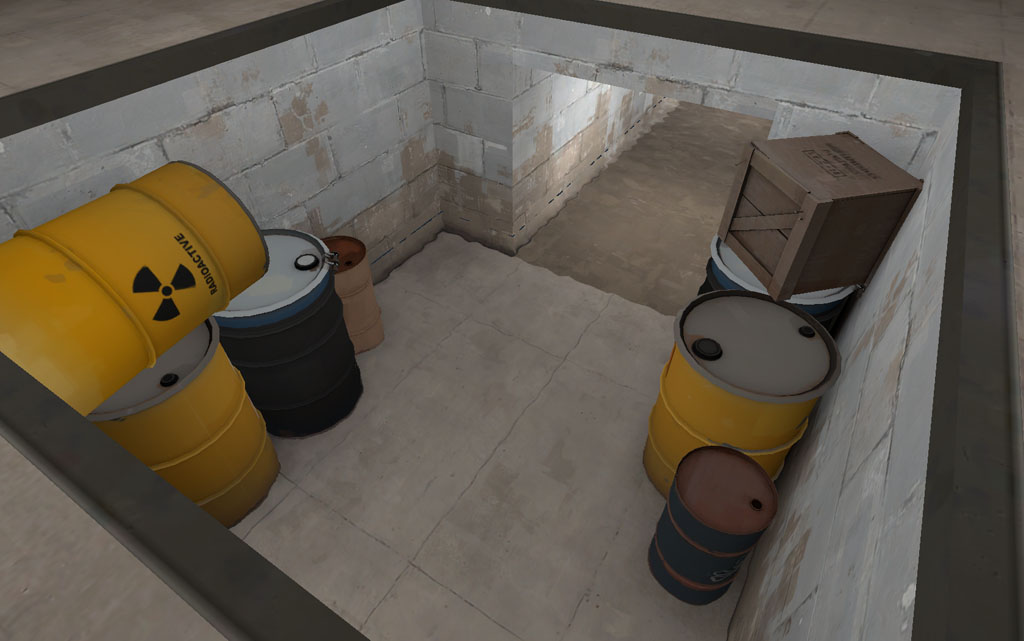 I like how this looks so far, keep up the good work.

Alpha 7, first public release is up. I've made some significant layout changes to the areas in front of each base. Hopefully this will break up sniper sightlines and make the area more interesting.

Lots of other changes, all in the changelog. The battlements have been revamped, all areas are now textured, spawn rooms have doors/windows/resupply cabinets.

Gameplay addition: the roof laser can be activated from inside the central structure by two cooperating players (standing on a pair of control platforms). This will destroy everything on the roof (players and buildings) after a short countdown. A 60 second cooldown is required before the device can be activated again. Kind of a goofy idea I guess but my test players have liked it so far (or they told me they did to get me to shut up about my map ).

The map file is available to download and test at your convenience. Comments and criticism appreciated!
Toggle signature

Those courtyards in front are pretty huge.
Toggle signature

Nerdboy said:
Those courtyards in front are pretty huge.
Click to expand...

In play I don't think they feel as big as they look in the screenshots. It is intended to be a more spacious map than most CTF maps (2fort, Mach4, Turbine...) though.

We've been testing it on PALS (my group's server) and have found a couple issues in A7.

Known Issues:
* Players can hold the main spawn door open and let enemies in (oops!).
* Occasional server crash on map start (? We were also getting this with a stock map today, so maybe it's a bug on Valve's side. Not sure).
* Secondary spawn would be nice, probably near the battlements.
* Standing in front of the drop chute exits can cause dropping players to get killed by the doors (not a bug per se, but a potential gameplay issue). Might add a push block there to shove players aside, or use a double-gate setup that allows the dropping player to pause for a moment and choose when to step out (instead of propelling them out).
Toggle signature

From 12/2/09 gameday: In general, I think most people had fun on this map. But there are some optimization and general size issues. The rooms and spaces are all quite large. I played as a cloak and dagger spy, so I was not often the target of sniper ownage, but this is certainly a danger. I do like the intel room, but I think if you shrunk it just a bit, it would make for a more balanced experience. I'm also not crazy about all the long tunnels. I prefer a more even mix of room/tunnel/room layout, though I suppose that is a matter of taste.
Toggle signature
TF2 World Domination! Project

Thanks for the gameday testing everyone! It quickly exposed a number of problems. I apologize for the optimization problem; chalk that up to a mapping noob not knowing that alpha maps still need full vis for public testing. If you played, I'd love to get your feedback.

The spaces are intentionally large, but I'm open to suggestions of course. In particular I think the areas in front of the bases need some work (they were originally about twice as spacious as they are now, but it seems like more is needed).

I've heard from different people that the sniper sightlines are both too good and not good enough. I'm not convinced sightlines are a problem given the number of routes through the map, but if there are specific problem areas I'd like to hear about them. I intentionally gave snipers decent coverage of the center building's roof as a counter for soldiers/demos up top, and I gave attackers a path up to the battlements as a counter for snipers. The battlements may need further expansion however.

So, problems I'm aware of:

1. Base exterior (front) still too open.
2. Tunnels too short/narrow in some cases.
3. Dropdowns broken in a7 (I know they were working in a6, not sure what happened there)
4. Laser functionality isn't obvious. Not sure what to do about that. Most of the people I've talked to like that element a lot, but it's a little confusing at first. I'm also open to suggestions on how to give it a more significant gameplay impact without being overpowering.
5. Can build in spawn tunnels.
6. Enemies can be let into spawn area through main door (didn't see this happen in the gameday testing but I know it's possible).
7. Sniper sightlines too good / not good enough?
Toggle signature

Looks awesome, only thing that I can see wrong is a bit of blockiness and thats it.

It was on gameday yesterday on your map that me and my long-lost Fedora were reunited, and for that I will always remember this map.

The big problem with the laser is that currently it only acts as a distraction from the bigger goal of capturing the intelligence. It seems like the flow should go in a way that capturing leads to an easier assault by the offensive team on the intelligence room.
Toggle signature
[K/O] Sypheren: Rikka i cant tell where i stand with you =\
prestige: rikka is rikka: a funny, blunt, sarcastic, sexy, girl

I've been working on ctf_third_law_a8 for the past week or so (finally found a little time for mapping). I don't have anything ready for another gameday yet, but I do have some significant gameplay and layout changes in the work that could benefit from your esteemed input. Any and all input are greatly appreciated.

Summary (screenshots are below) of problems and changes:


I've also been working on some other issues, notably the plethora of narrow pathways throughout the map. Those are more straightforward problems, however, so I've left them out of this update. 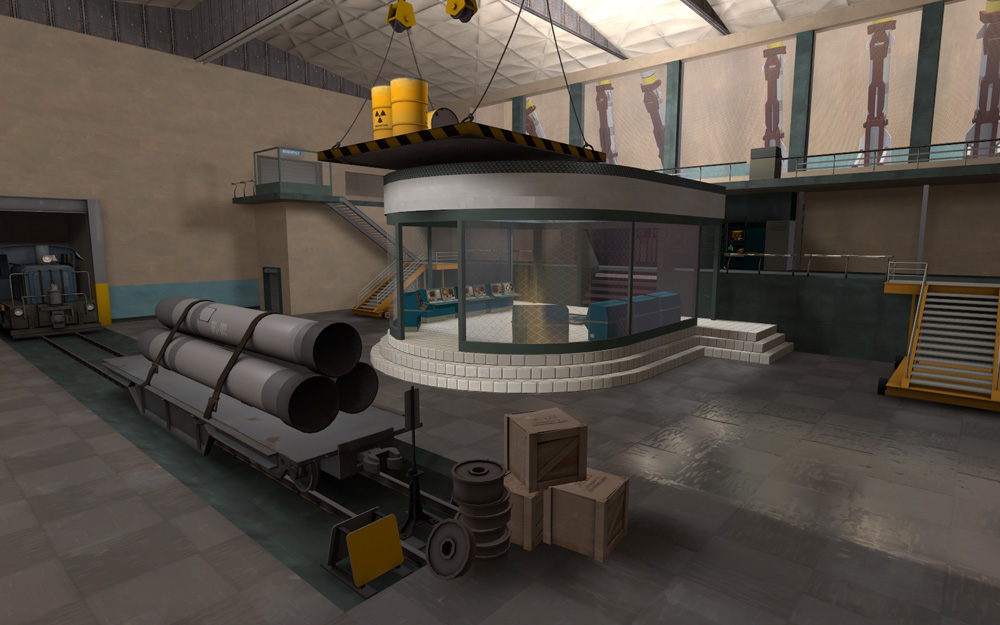 Base Interior (BLU)
Goals: move the intel out of the open. Make the base interiors more interesting to play in. Block sentry and sniper sightlines.
Changes: intel has been moved from its central location. New interior structure added as intel drop point. Protective barrier added in front of main spawn exit to hinder spawn camping (more about that in a minute). Secondary spawn exit added (will likely be moved, though). 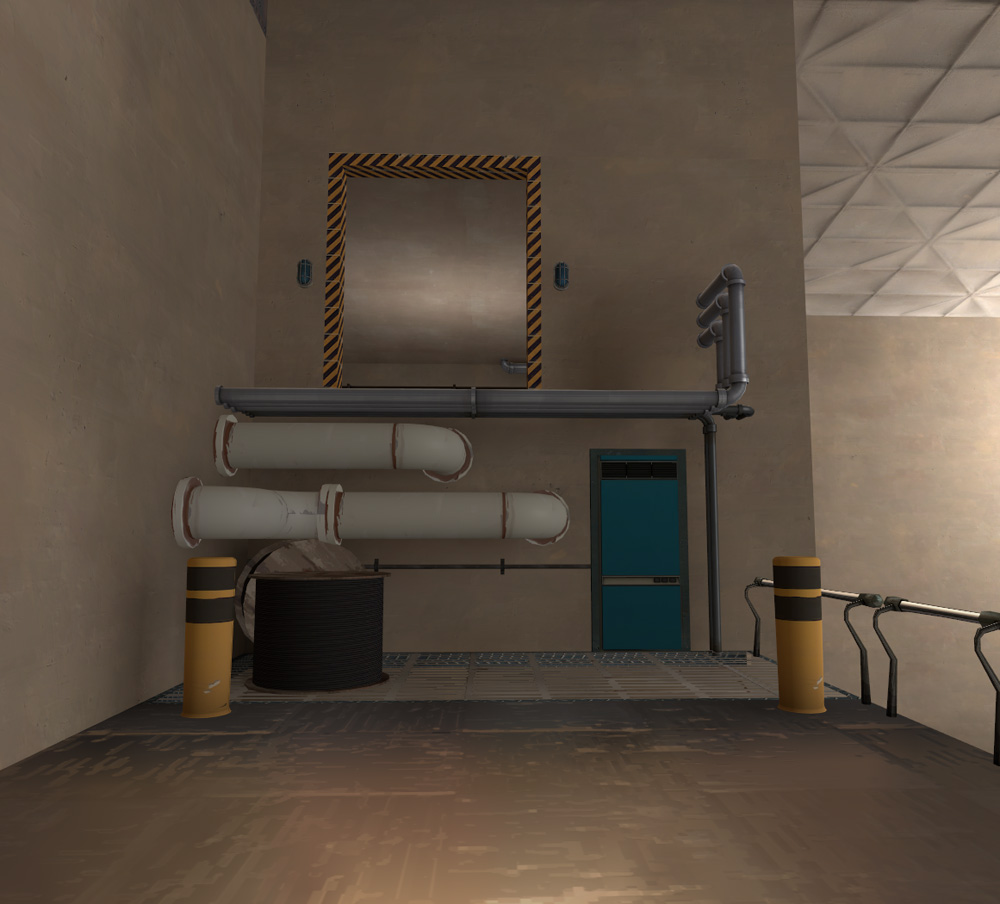 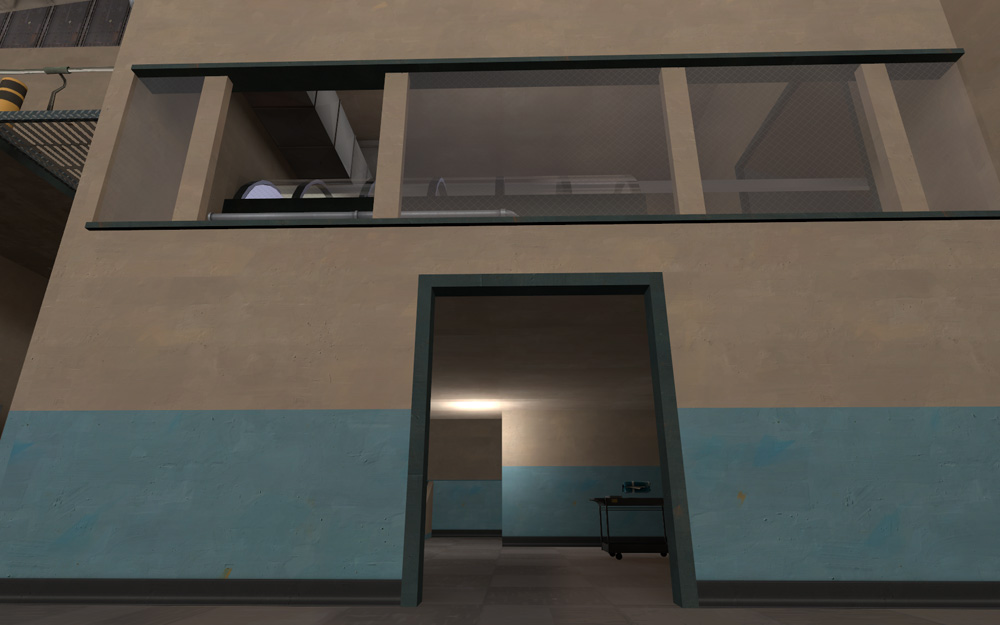 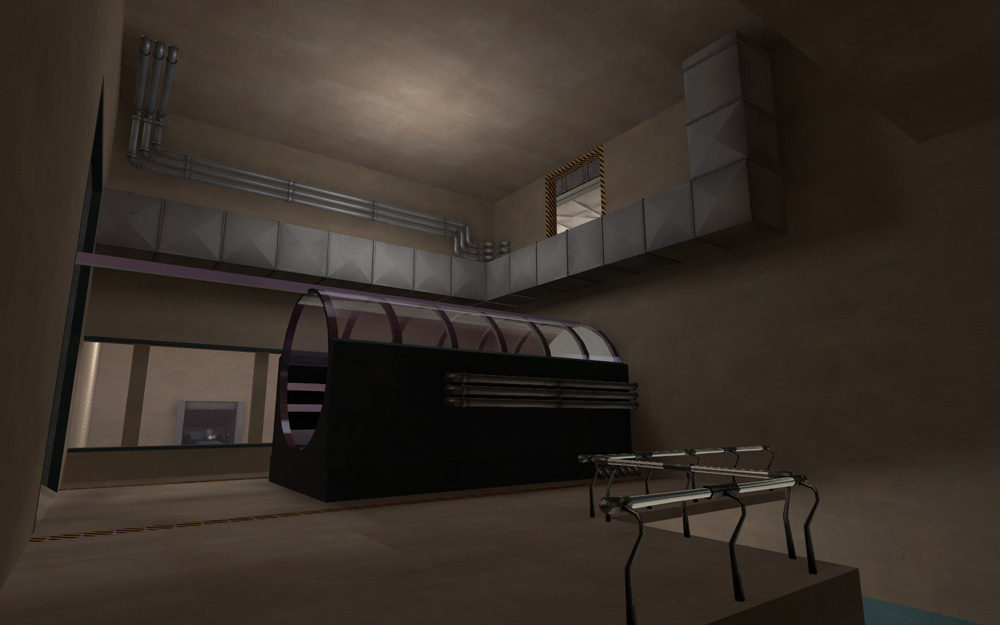 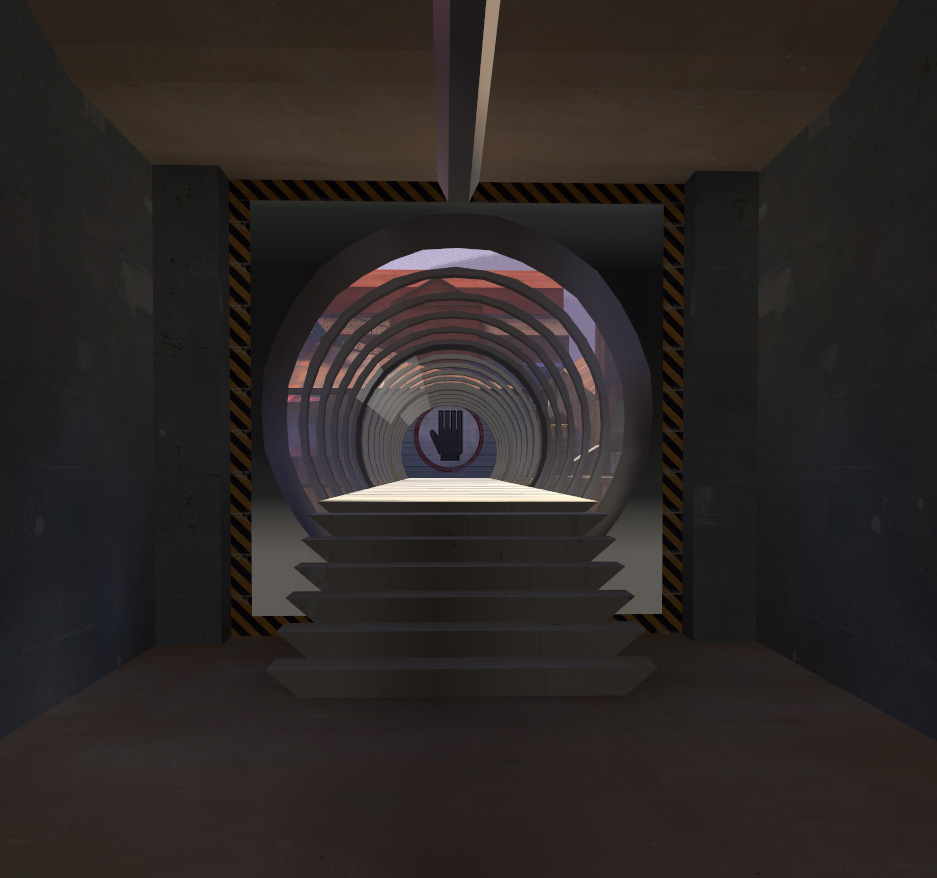 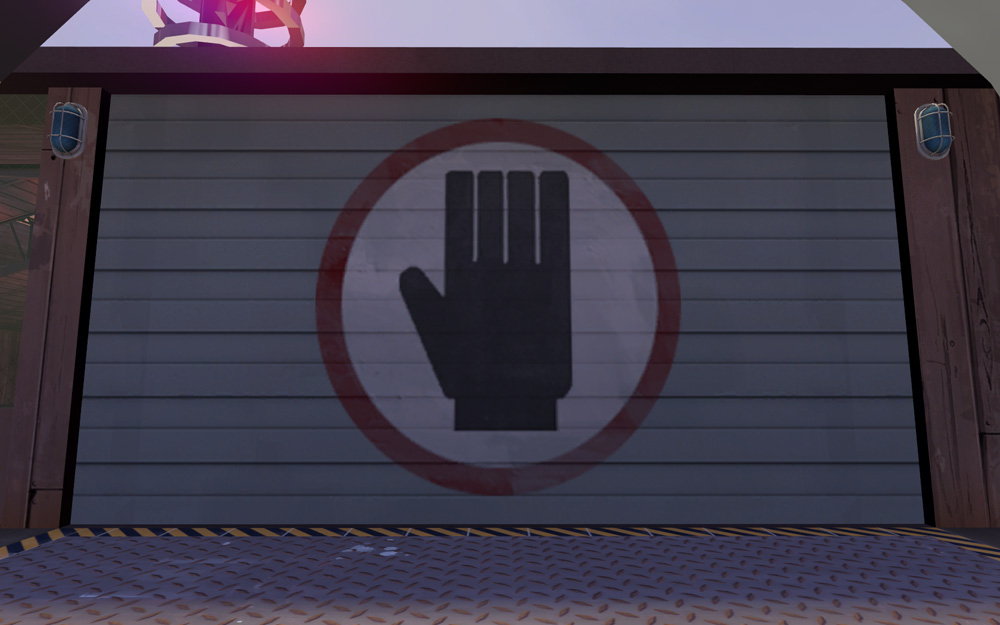 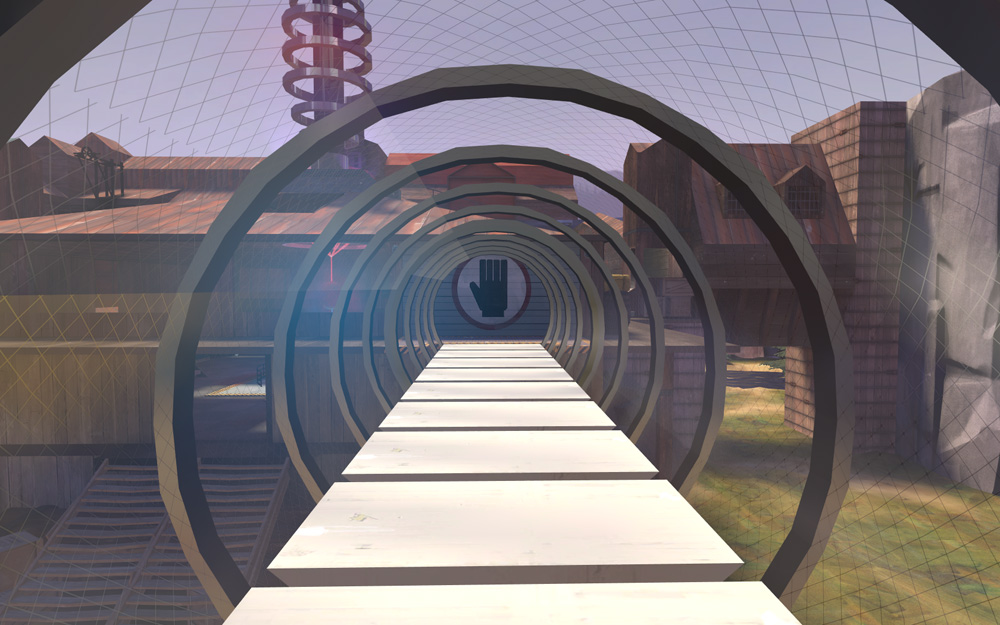 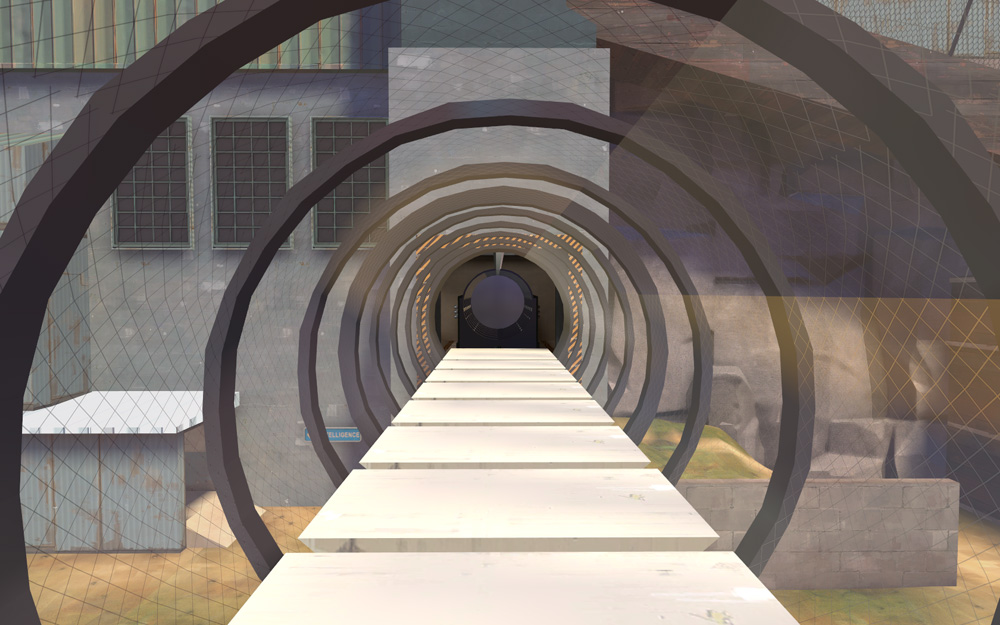 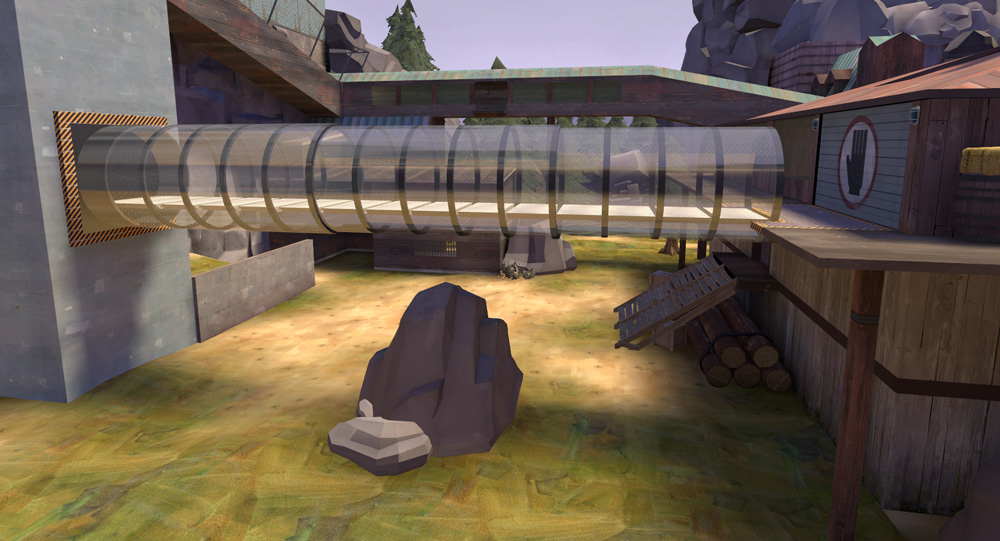 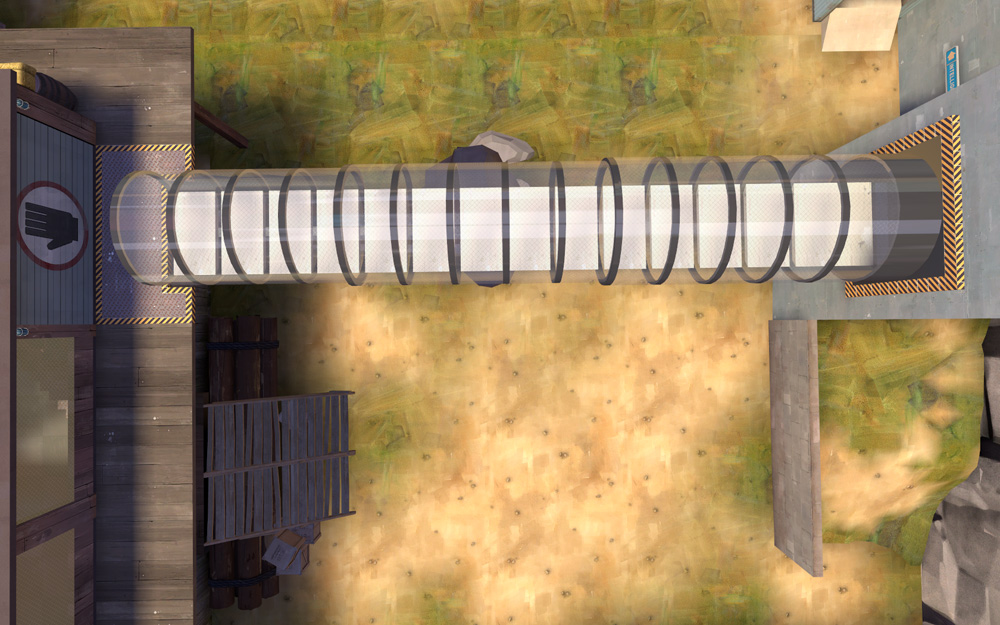 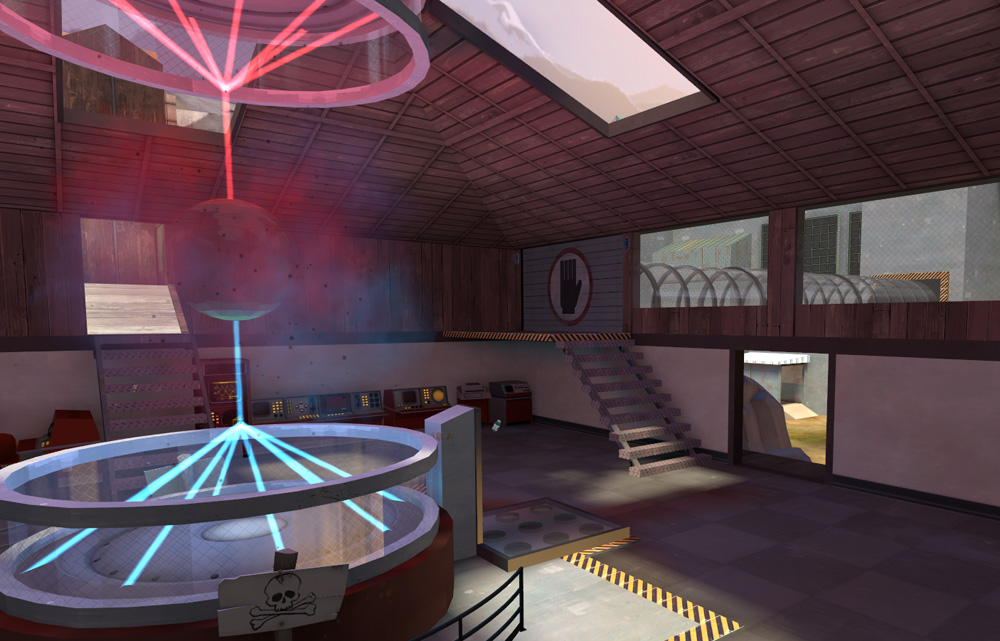 All of these changes are in a very rough state. The tube is not functional yet, though I have a working prototype. The general idea is thus:


Basically, you can't get the Intel until you take the central building. Once you activate the control panels for your team, the enemy's Intel will be exposed until you cap it or the round ends. Once the intel is capped, the Intel structure is sealed up again and the hamster tube withdraws.

I'm sure some of you are already :facepalm:ing, but what are everyone's thoughts on this idea? Good, terrible, needs work? There are a lot of variants I'm considering: intel exposure is permanent; interior entrances to intel structure are always open, only the hamster tube is affected by the central building; etc.
Toggle signature

After just over a year of not mapping, I'm getting back into it. Will see about finishing this map.
Toggle signature

A bit of texture work, after a long long long break: 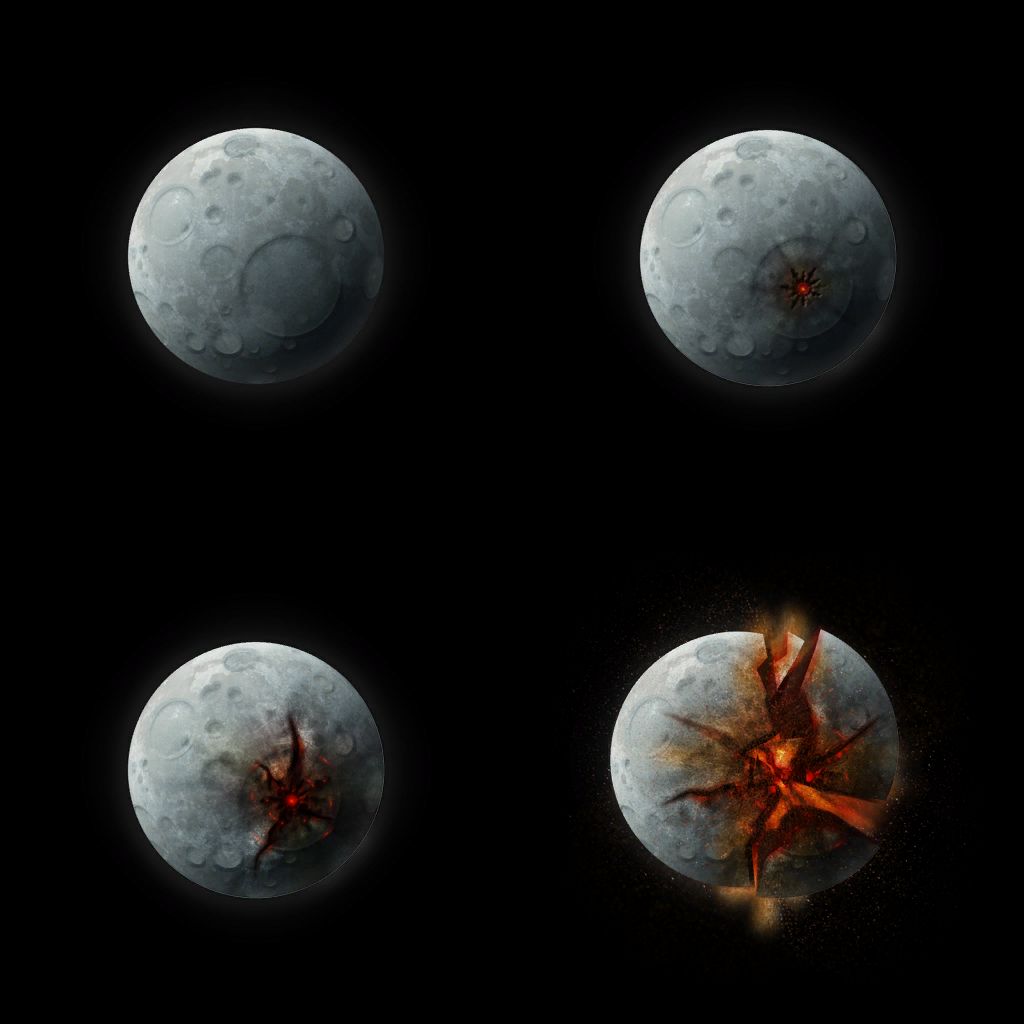