Staring as a simple bot designed to help us keep track of maps that needed testing in late 2015, and dutifully maintained for years by @Fantasma, our chat bot Vbot survived the jump from Steam Chat to Discord and completely revolutionized how we organized testing for TF2 maps. For their significant contributions to the mapping community with their work on Vbot, Fantasma was awarded a Map Maker's Medallion when they announced they were moving on from the community and could no longer maintain Vbot in January of 2019.

Since being transferred to our servers in January, it became clear that nobody knew how to properly maintain Vbot now that the original creator was gone. In light of this, @drp and the rest of the Staff team decided that the best course of action was to create a new bot from the ground up, and on August 9th, 2019, Vbot was taken offline and replaced with our shiny new TF2maps Bot.

TF2Maps Bot is our replacement for Vbot. It has many of the same features, though some features Vbot had may be missing or incomplete.

The current command list can be found here:
https://bot.tf2maps.net/commands.php

The major (public-facing) improvements over Vbot include:
We need your feedback!

Since TF2Maps Bot has been built entirely from the ground up, some things don't work quite the same as they did with Vbot. We'd like your thoughts on the new bot and some of the changes we've made.

Not sure if this is implemented already, but maybe the bot should only auto-delete maps if they've been tested with a minimum player count (like 7v7) so mappers don't lose time to maps run with like 4v4s at the end of an imp.
Toggle signature
cp_shelter - koth_kemptown - af_rapture - pl_emerge - ctf_extraction - mvm_havana
steam - twitter
"If an idea isn't daft, it isn't worth thinking about." -Karl Pilkington​

Commands such as !tf2m and !vdc would be great to have back. Also Dong please

Muddy said:
Not sure if this is implemented already, but maybe the bot should only auto-delete maps if they've been tested with a minimum player count (like 7v7) so mappers don't lose time to maps run with like 4v4s at the end of an imp.
Click to expand...

This is somewhat already implemented. It'll only consider your map "played" if the server had more than 10 players. Otherwise is stays on the list.
Toggle signature
heyyyyyyyy

drp said:
This is somewhat already implemented. It'll only consider your map "played" if the server had more than 10 players. Otherwise is stays on the list.
Click to expand...

Would it be possible to add another condition where the map isn't considered played if it ends with nobody on it? Since a playercount can easily go from 11 players to 0 pretty quickly.

Does the Forums-Discord synchronization apply to other roles besides VIP as well? (e.g. Veteran)
Toggle signature
Damn good stuff, sir

Izotope said:
Does the Forums-Discord synchronization apply to other roles besides VIP as well? (e.g. Veteran)
Click to expand...

A way to add maps to the maplist without going through Discord, such as directly through the site, would be nice; that way, people who are banned from the Discord wouldn't have to ask someone else to add their map, and you'd still be able to add maps if Discord was down
Toggle signature
Eventually I'll put projects I'm proud of here. Eventually.

Allowing !update to use the same filename would be cool (and a dedicated !noteupdate command) - people are getting issues like this where it seemingly doesn't work if the filename doesn't change 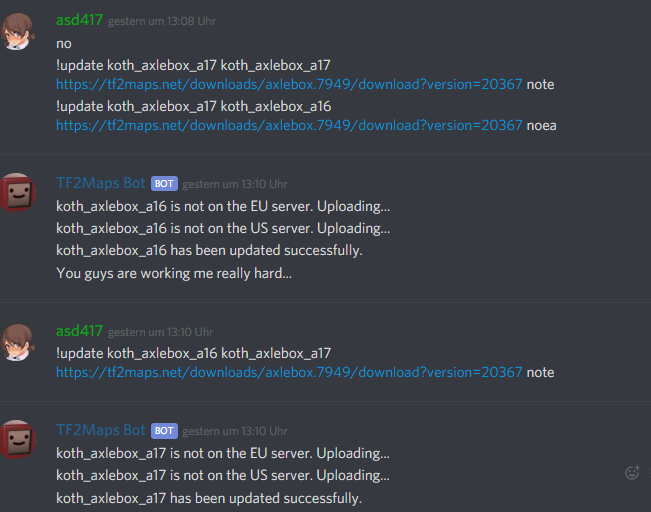 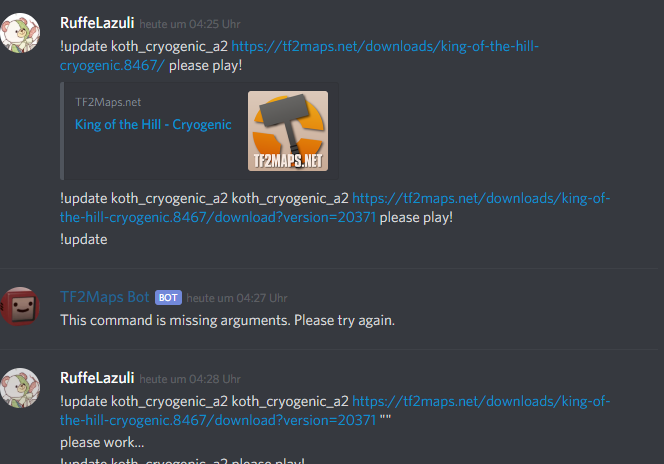 Currently, it seems like the bot doesn't check to make sure filenames follow the "gamemode_name_version" naming convention (such as "koth_trainsawlaser_rc2" instead of just "koth_trainsawlaser"). It isn't listed under the rules in the Discord at the moment, but it used to be, and is listed in this guide to uploading maps to the bot. It's a useful rule to have because if people have a different map of the same name (which is likely to happen if someone updates their map without updating a version string), they'll get a file mismatch error upon trying to connect to the server. I personally won't test maps if they don't have a version string, and advise imp hosts not to, and I often ask for a staff or server mod to delete maps without version strings along with a note to tell the submitter to add a version string. If you could add a function to the bot to check and make sure that the filenames of all maps submitted at least follow the "*_*_*" format, similar to how it checks to make sure the filename submitted to the bot is the same as the name of the file, that'd help a lot.

Another feature I'd love to see but would probably be much more difficult to achieve would be if maps submitted to the bot were automatically "claimed" by the submitter on the feedback site (seen by logging into the feedback site through Steam and clicking "CLAIM" on a map page). This would require data to be passed between the bot and the feedback database, and would require users to have both a Discord user (to know which user is submitting) and a Steam user (for claiming) attached to their profile, but it would make accessing feedback for your map a lot easier, and would also allow people testing the map to see who the author is in-game without having to do too much. Again, this is definitely harder to implement, and not quite as important as the first, but it's still something which I would appreciate a lot. Cheers!
Toggle signature
Eventually I'll put projects I'm proud of here. Eventually.

Some more filaname issues: in addition to making sure filenames follow the "gamemode_name_version" naming convention, it'd be nice if the bot also made sure that filenames don't contain capital letters or special characters, as I've heard that that can cause issues with the server. The bot also says "Your map name and file name are different. They must match." if the file uploaded to the site isn't a .bsp, which is confusing some newer mappers. I think that the bot should check for the file type of the uploaded map, and instead say something like "Your map file is a [file type] file, not a .bsp. Only .bsps can be uploaded to the server."

On a more project-wide scale, it seems only Dr. P has access to the bot's code, meaning any and all changes need to be made directly by him, which means we may need to wait for quite some time for features to be added. If he gave other staff members access to the code so functionality could be added quicker and by more people, or even made the whole bot open source like Fanta's bot, that would be much appreciated, but I can understand if he doesn't want to do that.
Toggle signature
Eventually I'll put projects I'm proud of here. Eventually.
You must log in or register to reply here.
Top Bottom