Get ready to clock back in for Microcontests Season 2! Once more, I'll be running monthy microcontests focused on strange rules, wacky restrictions, and pushing the limits of TF2 speed mapping. Be warned! These things aren't for the faint of heart. You'll be expected to be able to make an entirely functional map in under a day. Most of the time what you make will suck, but that's half of the fun!

Last year, most microcontests had a standard 1 hour planning block, 3 hour time limit, and an extra hour to compile followed by testing during the same day. This regularly confused people, and made it difficult for people to participate across time zones and around work and school. This time, we're shaking things up.

Here's the new format for Season 2:
Winning, Losing, and the Punchcard

Despite the name, microcontests aren't traditional contests. It's you against the clock and the rule set, and you can count yourself as a winner if you finish something—anything!—before time is up. That being said, this season I'm introducing a fun new way to track your progress and push yourself if you feel like going for it: The Punchcard. 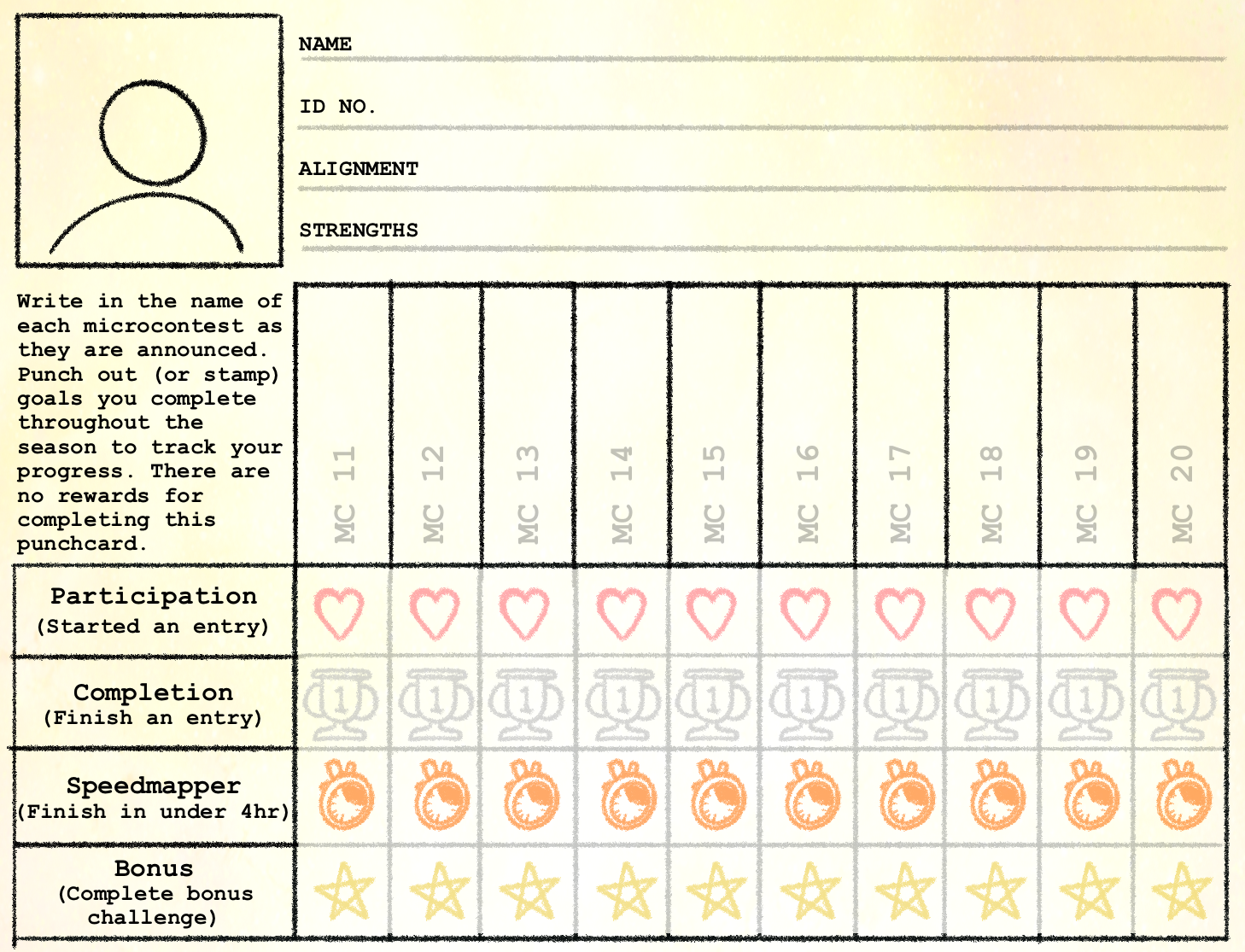 Grab this image, customize your card, and clock in at the start of each microcontest! You can collect up to four punches for each micocontest:
The punch card is purely decorative, and you don't need to fill one out to participate. It's just a fun way to track your progress throughout the season. Bonus objectives are new; they're optional rules and restrictions that you can try for to gain an extra punch. They'll be unique for each microcontest. Keep in mind that it might not always be possible to complete both the speedmapper punch and the bonus punch at the same time!

This season, you no longer need to sign up. Just drop a link to your finished submission in each microcontest's thread before time is up!

When's the next one?

Here's a handy chart of this season's microcontests with dates and difficulties. This will be updated as things are announced!

look at my fursona

Now that they're 24 hours I can actually join now! I'm excited~~

hell yeah! these were so much fun last year, so i cant wait to see what you come up with this time!
Toggle signature
| koth_zythesnow | cp_muskox | cp_ancient |
| Steel + Gpit Style A/D |

I hope with my little experience I'll be able to keep up; may not get that speedmapper punch but I best get all of the rest!
-and boy howdy this seems like it's gonna be a wild time for the first microcontest with the minor and major ones being announced along with them
Toggle signature
Howdy

I make experimental maps and gamemodes.

Sorry about the slightly late warning for this one! I'm in my last few weeks of university and have been very busy.

Brush up on working with Source's I/O system if you're out of practice; while this one is nowhere near as technically complex as MC5 or MC6, you will be required to do some entity work.
Toggle signature
8:17 PM - abp: on this episode of tf2m: staff helps user message staff
pass_gigantic --- tc_national --- pd_waterlog --- plr_guavagulf --- cp_reactor --- koth_icebox --- ctf_underpass --- cp_gorge2
Follow me: @Mr14bit - YouTube - Twitch​

This is likely the most technically demanding microcontest we've ever run, and you will be required to do lots of work with entities and systems you might not be familiar with. A template will be provided, but you'll have to do plenty on your own as well. You've been warned.
Toggle signature
8:17 PM - abp: on this episode of tf2m: staff helps user message staff
pass_gigantic --- tc_national --- pd_waterlog --- plr_guavagulf --- cp_reactor --- koth_icebox --- ctf_underpass --- cp_gorge2
Follow me: @Mr14bit - YouTube - Twitch​

I will completely ignore that warning, and make a mess that I will keep to myself for this challenge. (Can't wait!)
Toggle signature
Howdy

Since it's 2022, why not have a Microcontest themed around Sequels to other Microcontest maps?
Toggle signature
Minty <3

I make nav meshes! Check out my collections!
Symm CP | PL | KOTH | April Fools​
You must log in or register to reply here.
Top Bottom