Download
You are using an out of date browser. It may not display this or other websites correctly.
You should upgrade or use an alternative browser.
Overview Updates (14) History Discussion

Maple Falls - A 4CP made by Lacry

Fight in a forest with a lake, during autumn!

I haven't touch this map in a while (more than a year), and since its November, the most autumn month of the year, here's an update on my most autumn map.

I know last time the map didnt got any feedback, but sometimes i start working on the next version of a map even before releasing the finished one, that's kind of what happend here.

I don't like to ask for this kind of things but... why is this map so bad?

I mean, everytime it gets played people just doesnt seem to enjoy, and people actually leaves the imp just because of this map, today was played and people after 5 minutes were already asking for the next map. And the feedback i get i dont really think it improves the map too much, even if now i try to fix all the feedback i got, the map would still be bad.

There is one message that says "feels like there's not a lot of effort put into this map", and this is a big let down to me, because i worked a lot of days in this version, maybe i'm doing something wrong while mapping, but to me it takes me a lot of time to make a new version, and it doesnt feel nice when i complete it and people just doesnt like it.

I don't want to blame the community or anything, but i really want to know why this map isnt fun and fix it, cause i dont want to spend a few days on the next version to get a similar impresion.
Toggle signature
Maps: Casbah · Seashore (Snowshore · Sinshore) · Leicoast · Maple Falls · Bound · Bosco
Other Resources: Every Environment · Every Menu Photo · Missing Menu Photos · Lacry Pack · Every Team Fortress Map
Miscellaneous: Forgotten Gamemodes · Particles 101
// Avatar by Tumby

Hello, I was in the last test and here some reasons as to why I personally don't think it is very good.

- Skybox is too low.
- Spawns are easily camped and exposed.
- Walk distances feel way too short, there is no evolving front line to speak of, you own the mid or you don't.
- Everything feels cramped.
- Gimmick of two points at mid adds nothing to powerhouse style 3cp, it just makes taking back control that much harder.
- Even if you made the points further apart, it would then split teams up when trying to push mid.
- Gameplay spaces feel like they lack any sort of options for interesting tactics or gameplay, especially last. 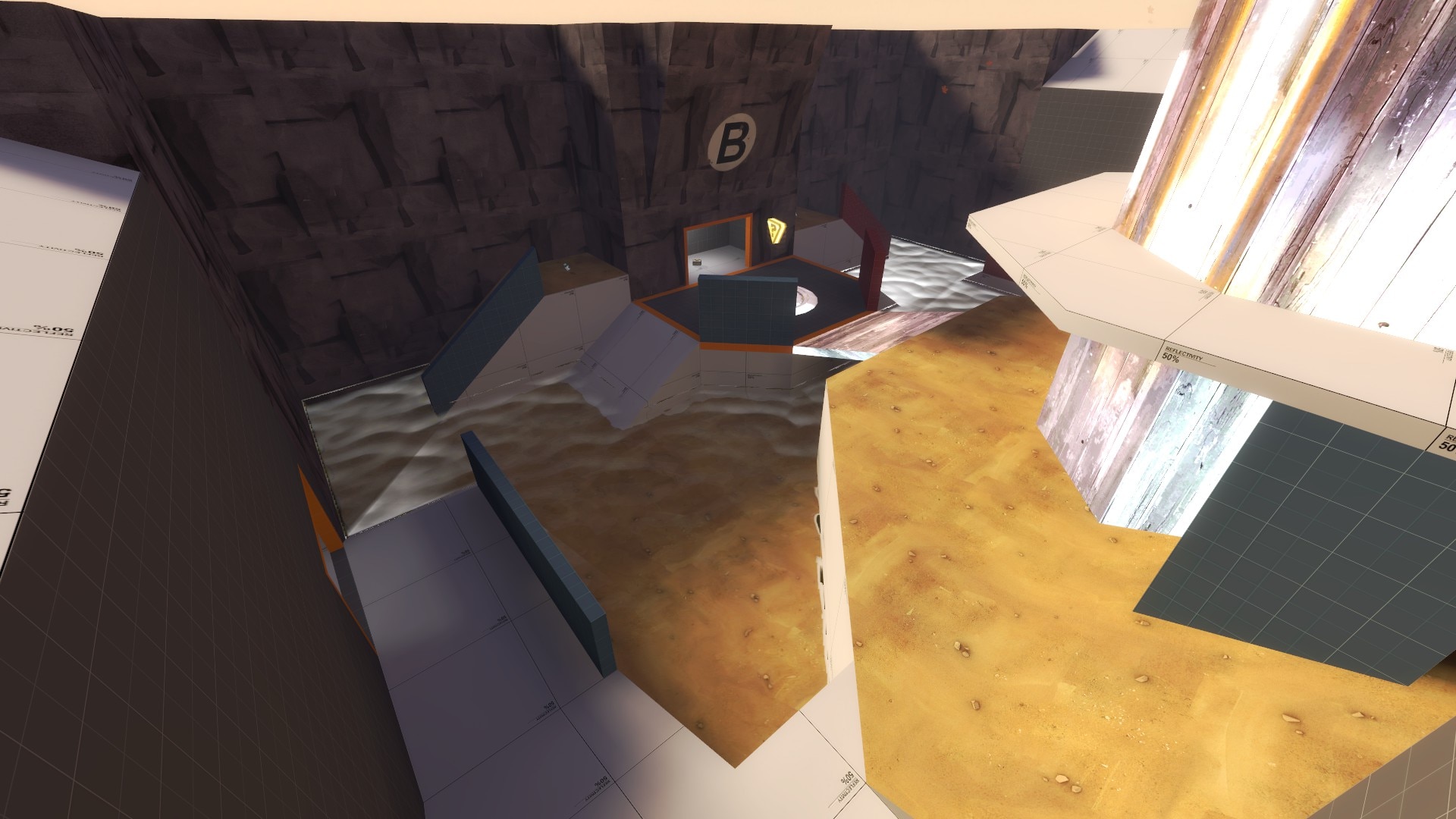 B side feels like a death trap for any non-jumping class, everything is cramped and on the low ground compared to rest of the mid. There is no good angle to take fights with anyone on the A side of mid unless you have some sort of a mobility ability, it doesn't help the only direct entry to this side is a small doorway that can be easily camped from the point and the platforms above. This is just not a fun area to play in. Rotating between different height levels doesn't feel very good or natural, a lot of it just blocks, which probably gives impression of it being rather hastily made. Both sides of mid could benefit vastly from being made using displacements. 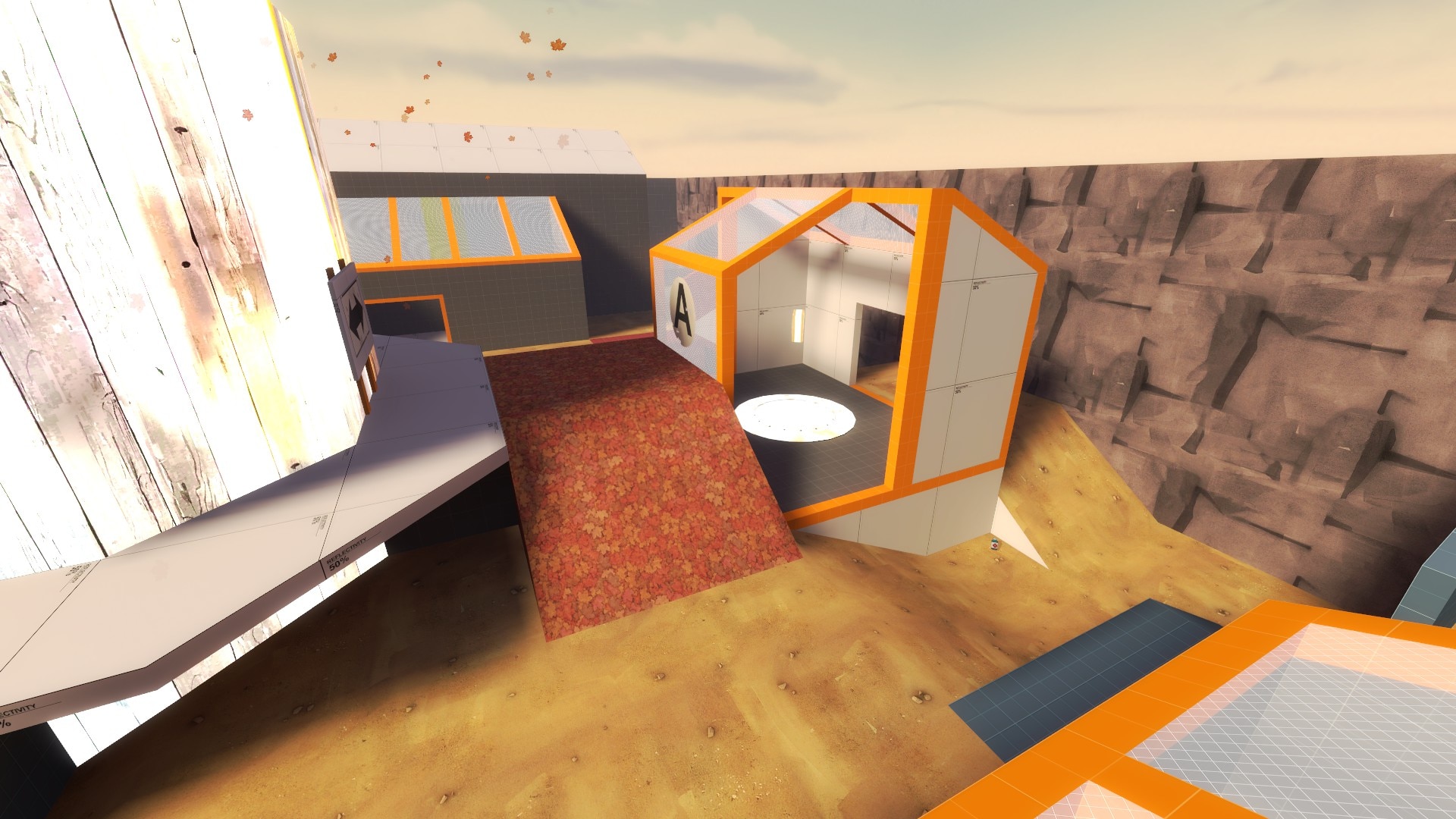 A side has a lot of same issues as B side, cramped to the point of being nightmare to navigate efficently with all the height difference crammed into such small space, only entry ways are small and easily spammed. Getting onto the point itself is also extremely awkward with a lack of proper paths onto it. 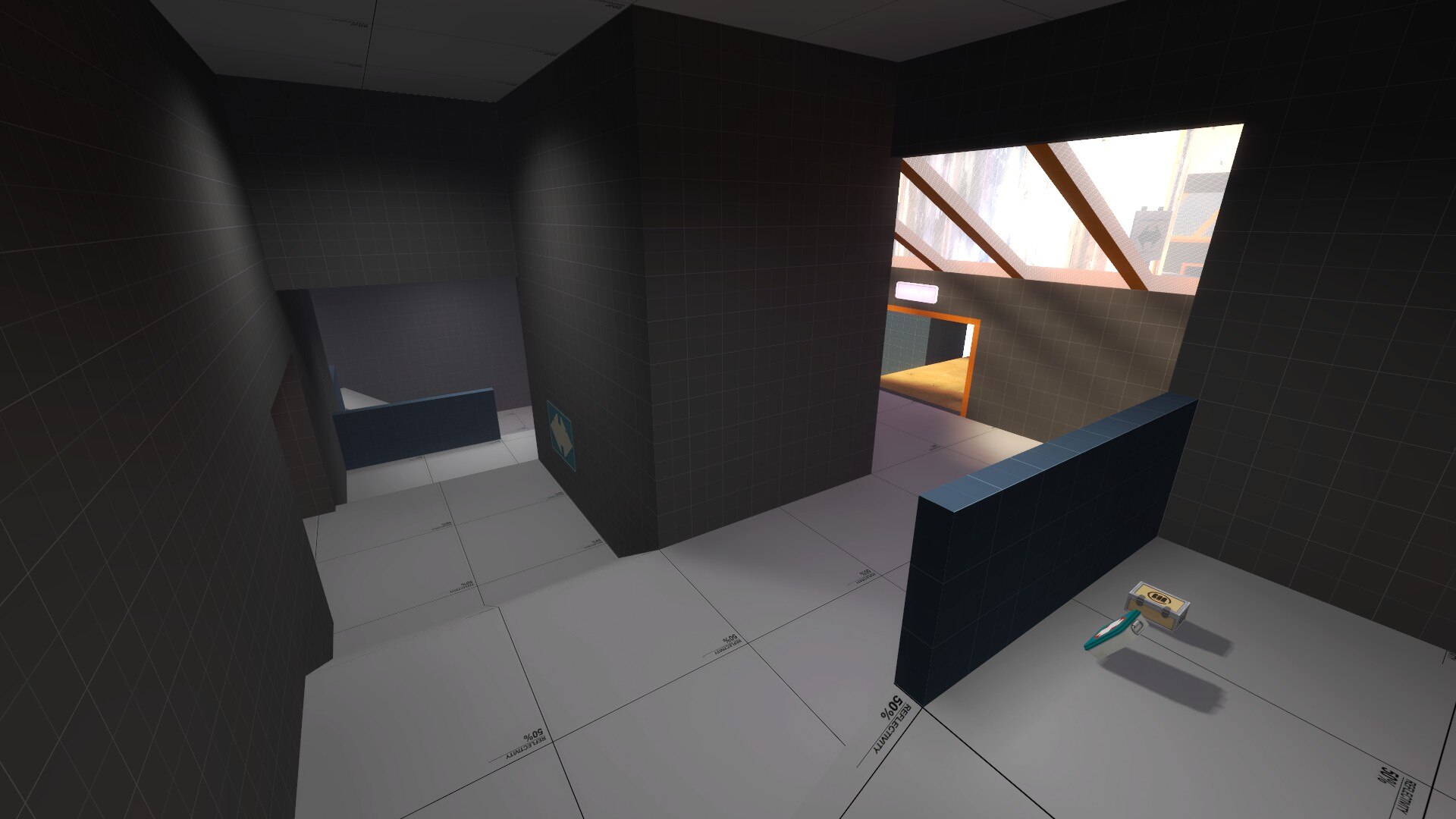 These lobbies are so small and cramped, calling them lobbies is generous, all of this space feels more like corridors that are supposed to connect areas rather than area either team is supposed to stage an attack from. If you look at a lot of other lobbies on different types of maps, they are generally rather large playspaces themselves, they should not in most scenarios look like a corridor. 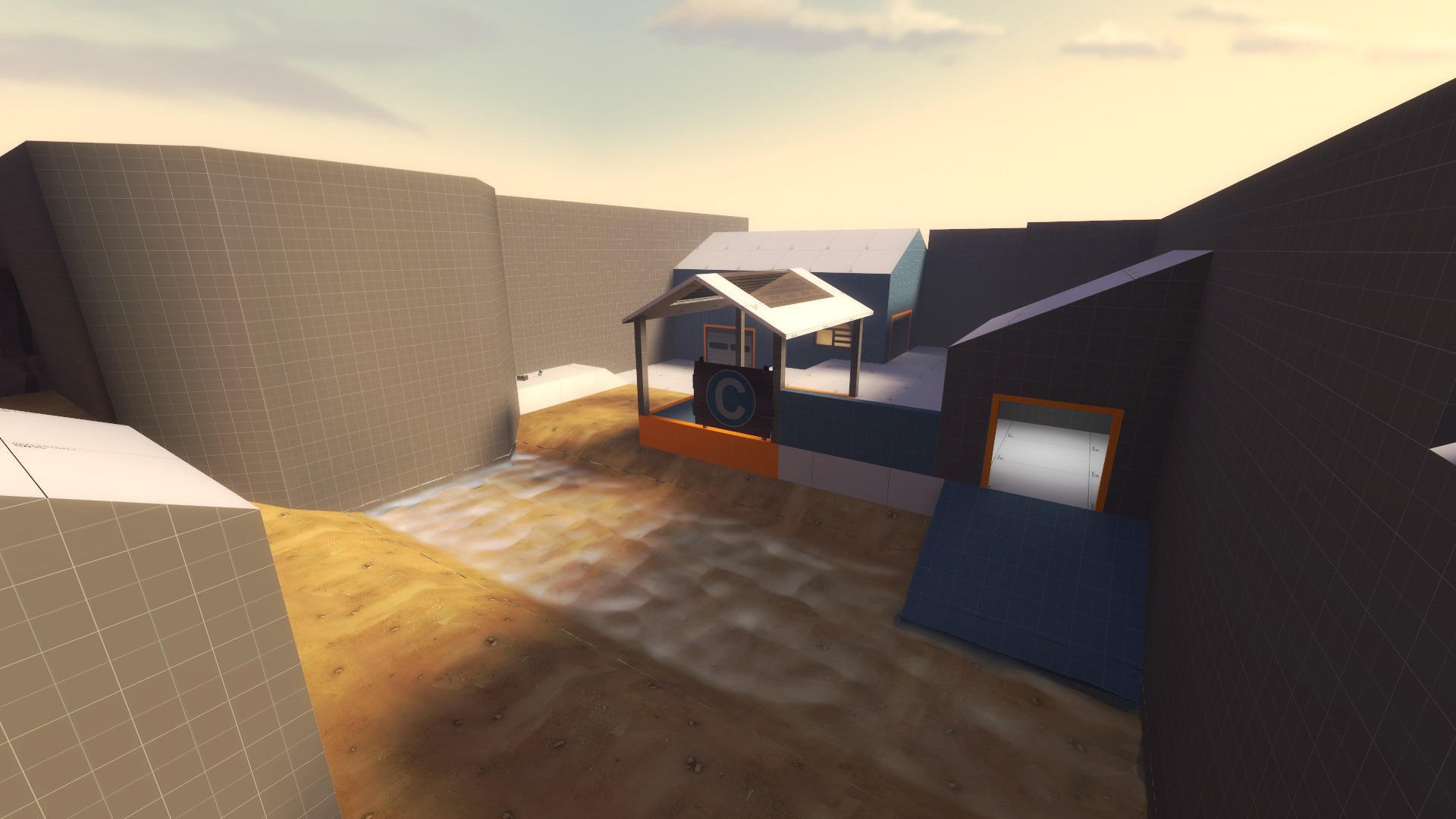 This is outright the worst part of the map and I would personally just go straight back to the drawing board with this one, everything is so flat and open, whole area feels like it has been crammed into this small square. Every entrance leads to the same yard in front of the point, it doesn't matter what route you take, it makes no difference on how you approach the point. Spawns are easily visible and in the same area, resulting in extreme spawn camping as soon as the attacking team gets any foothold in this area. Little height difference there is doesn't feel like it meaningfully impacts any gameplay because it is all universally the same height and it is not a very major height difference at that.

When you look at this area, try to picture how you would play it as each class, what sort of different approaches you would take to take on the objective as attacker or defender. Hard as I look, the most interesting thing I can think of is rocket jumping on top of the roof, but there are only two classes that can do that. You could apply a lot of this thinking into the rest of the map as well, I think there should be pros and cons to every route and approach to an objective you make on your map, it gives areas purpose and players options. When playing it in the test, a lot of the map felt like it just existed for sake of it, all the routes and height there is existed just to fill a quota, if that makes sense. In the test, I was stuck in this cycle of spawning and mindlessly pushing forward until we maybe captured mid or captured last, over and over, playing no different than my last life.
Toggle signature

-Fixed a leak in the map (surprsingly, nobody noticed it)
-Fixed the nobuild near the jump pad
-Added blockbullets in the fences near the pond
-Reduced the respawn time(?)
-Converted the pile of leaves to displacement​
Read the rest of this update entry...
Toggle signature
Maps: Casbah · Seashore (Snowshore · Sinshore) · Leicoast · Maple Falls · Bound · Bosco
Other Resources: Every Environment · Every Menu Photo · Missing Menu Photos · Lacry Pack · Every Team Fortress Map
Miscellaneous: Forgotten Gamemodes · Particles 101
// Avatar by Tumby

-Fixed the collision of a prop​
-Changed capture times​
-Now you can build on top of B​
Click to expand...

-Made a bit bigger the distance between the spawn ant CP C​
Click to expand...

-Fixed some issues in the spawns​
-Changed some dev textures, and the roof of one of the buildings​
-Made one of the doors to middle bigger​
-Changed respawn times when mid is capture​
Click to expand...

I cant believe it took 4 months to update this

-Added a new route around CP B​
-Changed respawn times when middle points are capped​
-Made some minor visual changes, now it looks more open​
-File size is smaller​
Click to expand...