Grey - Inspired by: cp_orange. It's a casual King of the Hill map for non-stop community servers.

Inspired by the famous map: cp_orange.

Koth_grey is a casual king of the hill map. It's designed for non-stop community servers. The timer is set to 20 minutes. The first time it's trickier to capture the point. The map is large and it's good for all classes: Sniper-spots, Towers, Tunnels and... big death pits.

Feel free to use it on your server. Please keep in mind that the map is in alpha version and it can be a little buggy. The fixes are in progress, I'm working on them. Also the map will be updated. 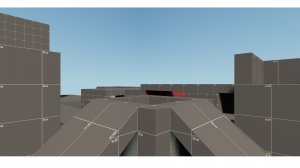 Haven't played yet but the point looks really hard to take. It would be incredibly easy to spam grenades from above

The reason for this is the timer of the map. I wanted to create a really long round time that's the style of the map. I made it for community servers.

Jack_Magma26 said:
Haven't played yet but the point looks really hard to take. It would be incredibly easy to spam grenades from above
Click to expand...

SeriousMartin Featured this map.. Sort of.
Toggle signature
That wasn’t supposed to happen.

with Koth the height of the point needs to sit within a fine balance to work well for both attacking and defending players.

an overly high point favors defenders, an overly low point also favors defenders. relative to the structure directly above, your cp is very low and can be spammed to no end from highground.

dogpile caps only really work in a/d in my opinion, wherein pouring into the lowground to cap is a commitment that will have a permanent effect on the round.

koth_harvest has a somewhat similar structure above the point, with a gap that Soldiers can bomb through. the difference is that on Harvest attackers have accessible highground overlooking the point's roof. this allows attackers to knock off any defenders sitting over the point, while the walled off nature of the point's structure means that the attacker's highground position can't be abused to spam into the point.
You must log in or register to reply here.
Top Bottom