Download
You are using an out of date browser. It may not display this or other websites correctly.
You should upgrade or use an alternative browser.
Overview Updates (13) Reviews (1) History Discussion

There will be two once fully complete (2 points on the 1st stage, and three on the 2nd). Let me know of any feedback of the layout issues so that I can begin to make improvements. The first test went well and I'm happy with the direction the project is going. We identified many very fixable problems which I'm reviewing now. Looking to have A3 out in with a bunch of fixes in a couple of weeks or less. Thanks.
Toggle signature
koth_moonshine_event, koth_moonshine, cp_stoneyridge, cp_spookeyridge | Working on pl_extinction (fka. pl_geyser)

Chang log to A3:
-Added tunnel going from first point to second to Blu's advantage
-Added cover to tunnel going to 1-2 to lower snipe lines
-Added more space to 1-2 area
-Added pipes (brush placeholders) as extra walkway and cover
-Made ledges more distinct to show what can be jumped on and what can
-More optimization
-Fixed cart turning on 1-2 at the end
-Added water and made ramps more distinct
-Added some cover in a few areas
-Made stairs less harsh to walk up going to upstairs area leading to 1-2
-Added new sniper window on upstairs window
-Geysers added for early testing of sprite, placements will most likely chage. They have no impact on players currently, but will in a future state

Initial test on A3 are running positive based on the changes. I plan to sit on this version for a bit while stage two is complete.

Current issues that have been recognized in A3 and will be fixed in the next version are:
- Spawns group players into one spawn point on blue (does not affect gameplay, but annoying)
- Geyser particles were not packed correctly and do not seem to work when run on a server (if anyone can point me to a fix for that, that would be greatly appreciated)
- Few annoying clipping issues around the rocks
- A few platforms need to be raised or lowered to make it clear if they can be jumped on
- Lighting in some places of the spawn need to be more lit for testing purposes
- Short list of stuff found when testing more with bots

I'll add more to this post as they are found.

Edit: actually working to fix everything above and a bunch of other stuff in A4 by end of weekend
Last edited: Jan 30, 2016
Toggle signature
koth_moonshine_event, koth_moonshine, cp_stoneyridge, cp_spookeyridge | Working on pl_extinction (fka. pl_geyser)

A4 Updates include:
-Fixed blue spawn
-Cart now heals blue
-Windows added to blue spawn and slight changes to spawn
-Back red building on 1-2 has been reformed
-Long flank hallway changed to feel shorter and more cover - Door added to open after 1-1 is capped.
-More consistent lighting
-Removed health from red back platform
-Reworked top hallway to make it slightly shorter and more optimal to take
-Geyser sprites should be fixed
-Added final displacement to beginning area
-Overlays added for health
-Made ledge coming into 2-1 not jump-able by Red

Thank you to everyone who tested in the most recent test and the late night test on the 72 hour weekend! It was fun testing everyone's map and to give geyser a shot on a full server with a bunch of what felt like crammed fixes through A3 and A4.

I'm working towards A5 currently which should be out by the last week of march and will include some major additions.

Jukebox has been busy on finalizing the T-Rex head, right out of the first gates of blue (pictures below). Below is his latest work (I'm excited, for this):

Early pics of the T-Rex Rib-cage - Jukebox's WIP (there will be multiple variations of this eventually, with split ribs, single ribs, one side of the rib cage, etc.):

Comparison screen below, white brushes are placeholders of the dino-skull above and eventual rib-cage bones he is also creating. I still think my brushes are kind of better : 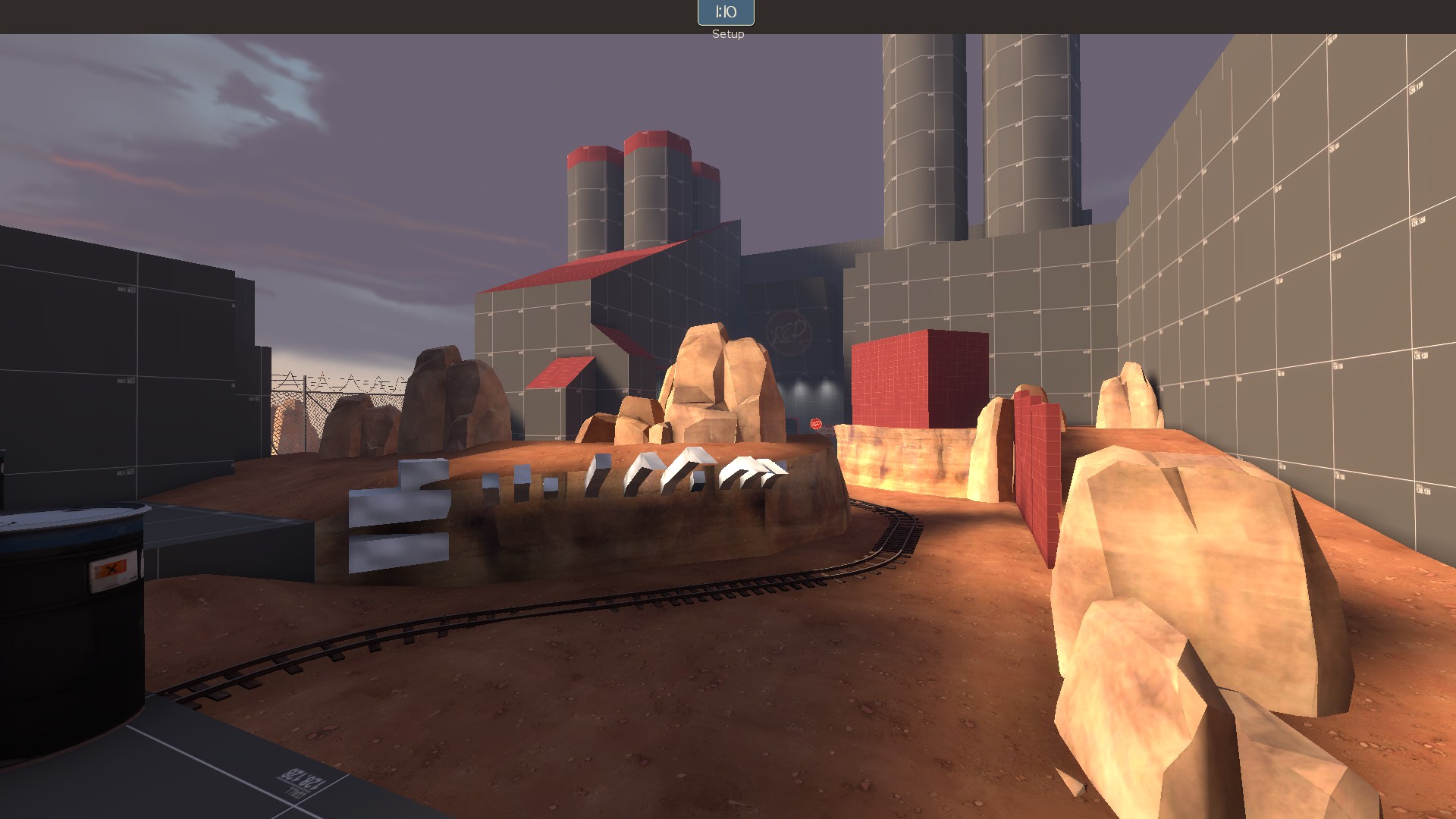 Below is a list of identified issues coming as fixes in A5:
- Red spawn door also parented
- Add door (opens after first point caps) to right flank route to prevent red players (Scouts mostly had this problem) from jumping in there and getting stuck

Bigger additions coming in A5:
- Some optimizations to first stage
- (1-1) Some changes to the first area to enable red in the main building with health pack changes
- (2-1) Health pack changes and locations/revisiting some of the "prime" engi placements
- Fixing geysers particles and enabling ability to push players up (still can't seem to figure this out)
- Adding alpha of stage 2 (final stage), which will include 3 points and some cool additional geyser/dinosaur-bone gameplay features. Below is a sneak peak of some of the initial stages of boxing out stage 2 (I've got a long way to go):
Point 2-2: 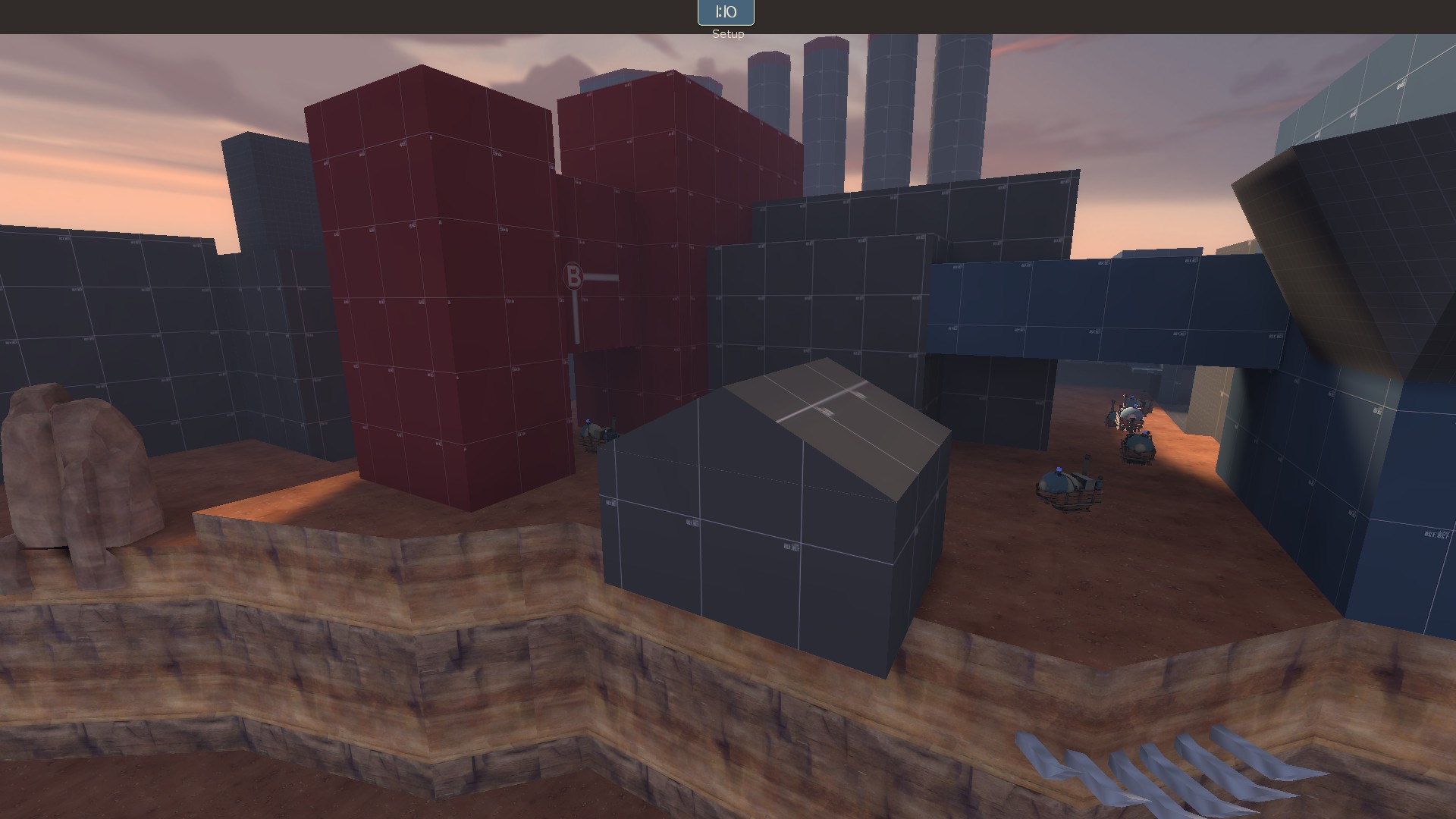 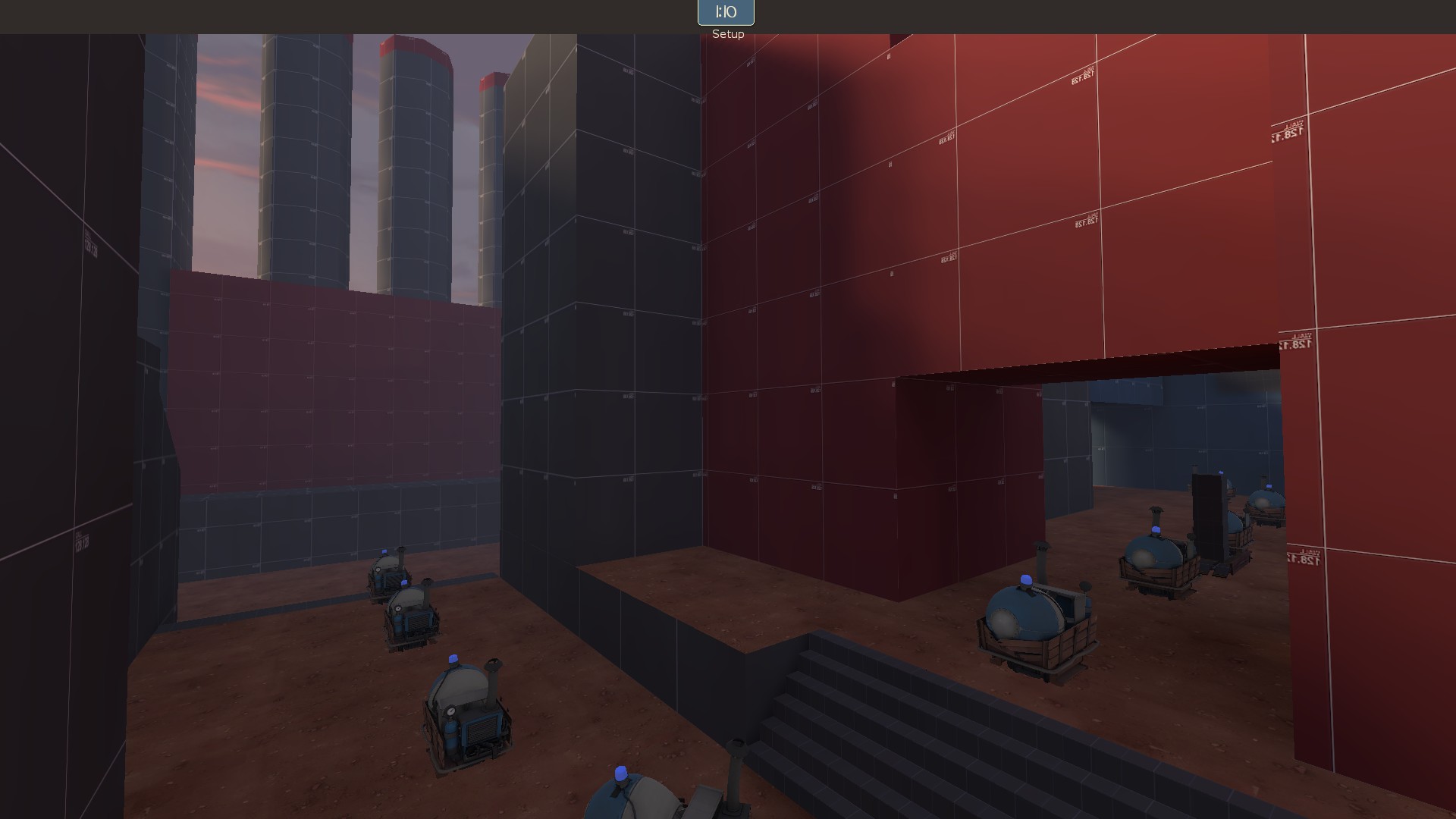 After some testing I finally got the geysers working close to the way I was wanting (despite a bunch of changes the the height still needed.) Below is a video of the latest testing:

heyyou said:
After some testing I finally got the geysers working close to the way I was wanting (despite a bunch of changes the the height. Below is a video of the latest testing:

That's looking really good for being in such an early state.

I haven't gotten a chance to playtest this map yet but the geyser dynamic mechanic certainly looks pretty interesting and it's something that's going to really set this map apart from other TF2 maps.

I finally finished placing just about everything in the 2nd stage. I need to add clipping, optimize, and complete entity setup, so I am expecting the next version (A5,) which will be the complete map in one file, out by the end of April (missing my personal goal by only one month).

This test will be a huge drop in the bucket for the 2nd stage as a few places I tried not to overthink. I'm excited to see how it stands up to the first stage. Thanks to everyone who has followed on the WIP thread leading up to these screens.

Here are the pictures of what to expect when the final pieces are in place for stage 2, all in order to the last point: 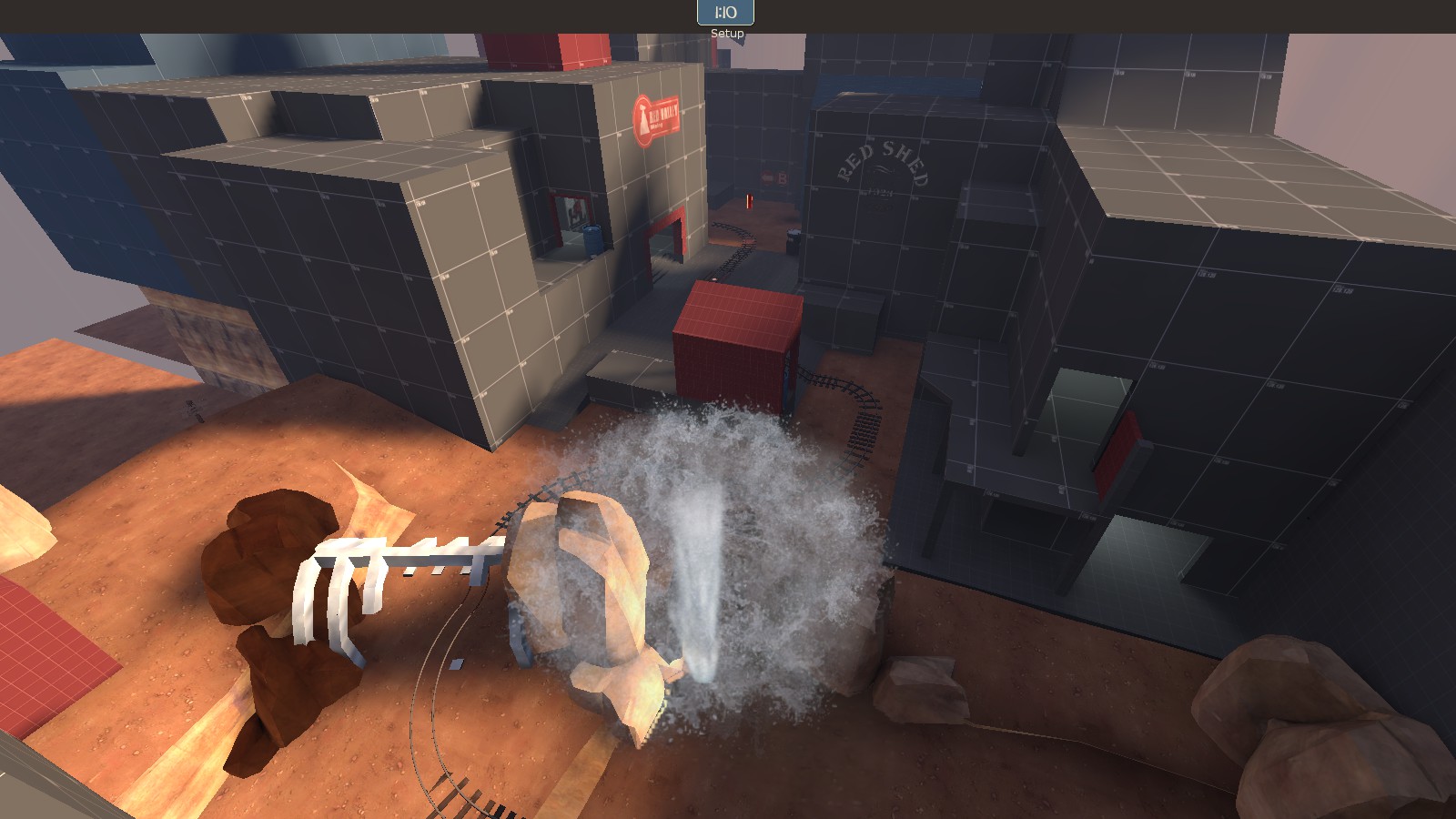 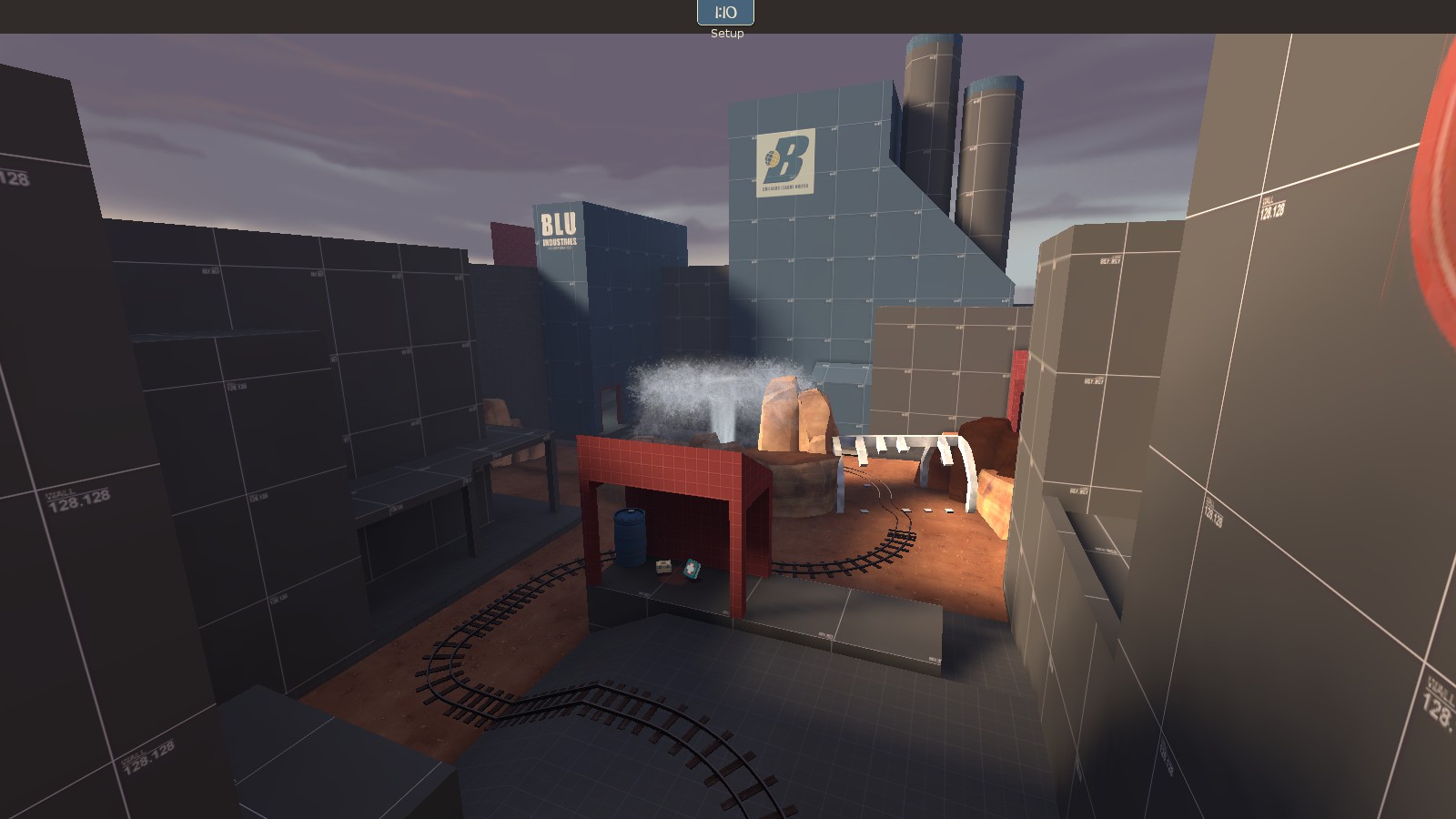 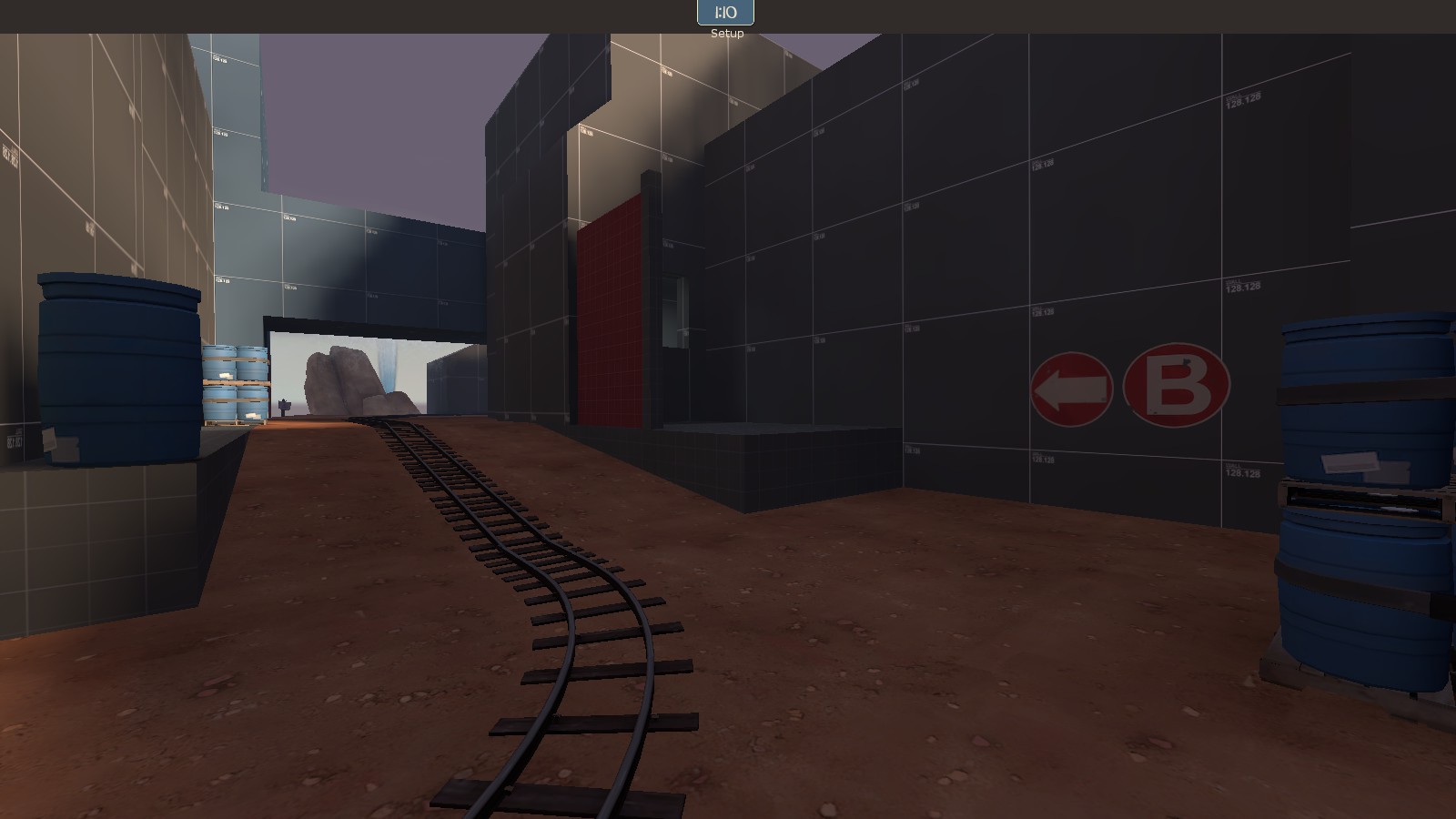 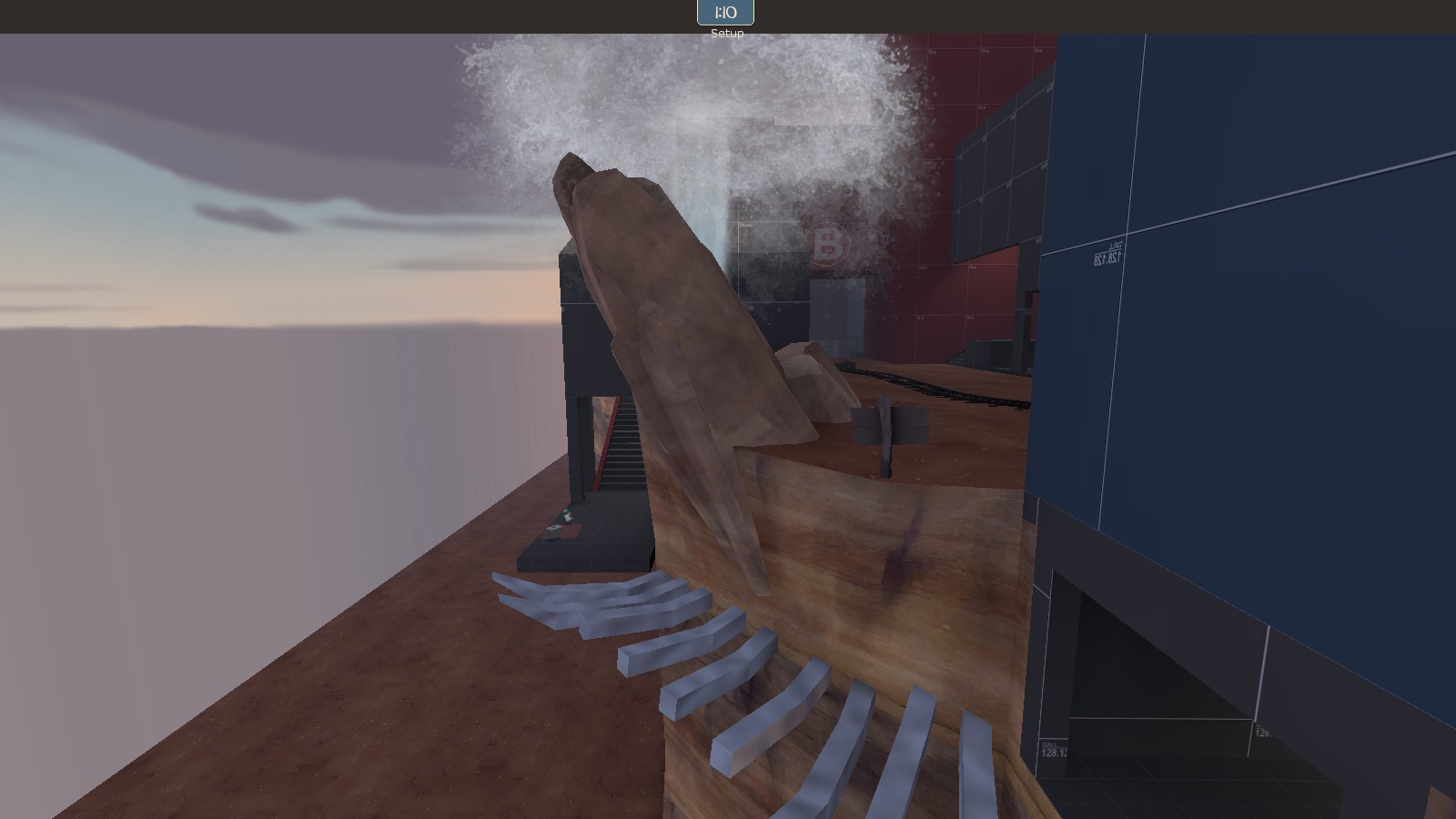 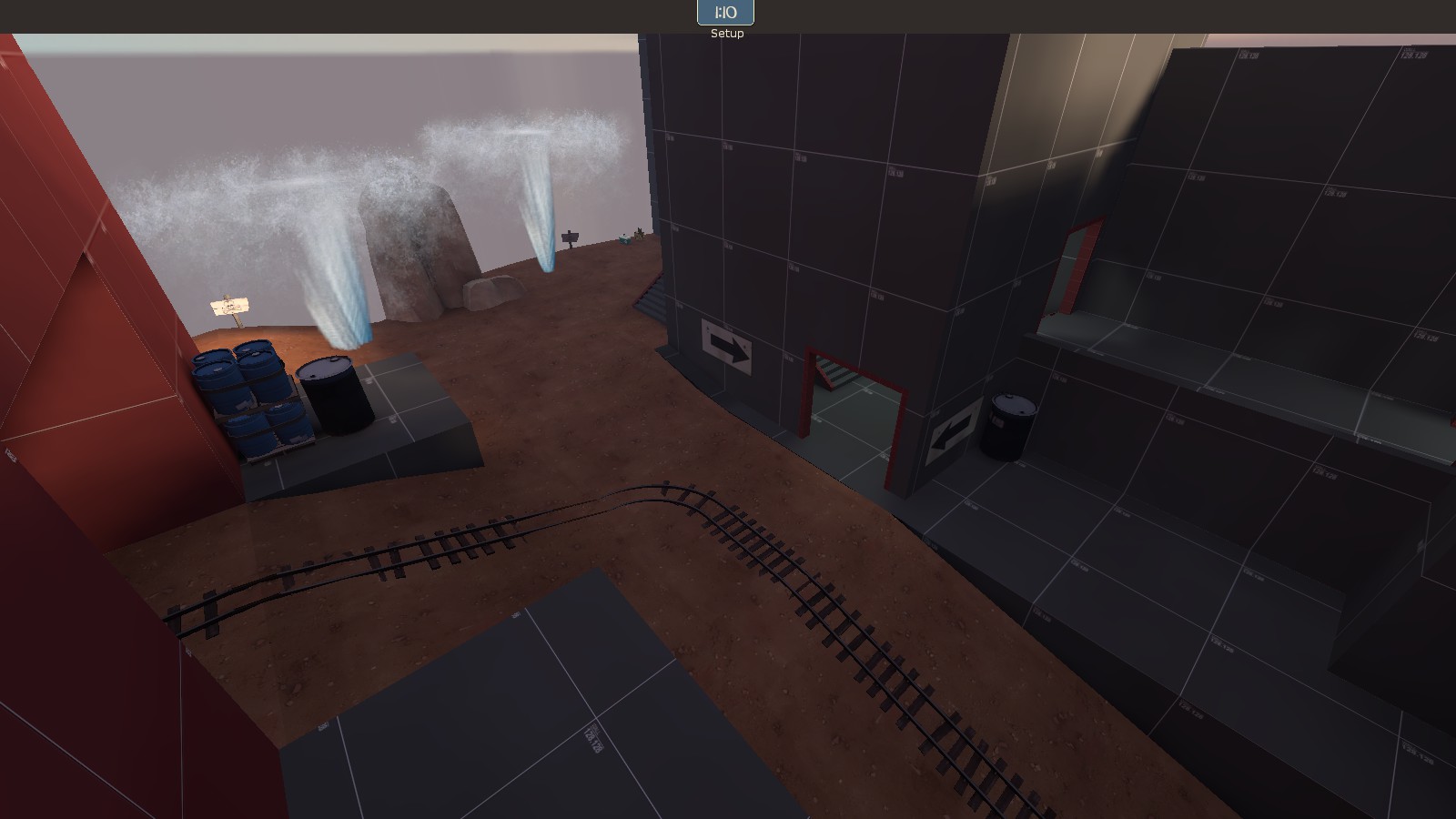 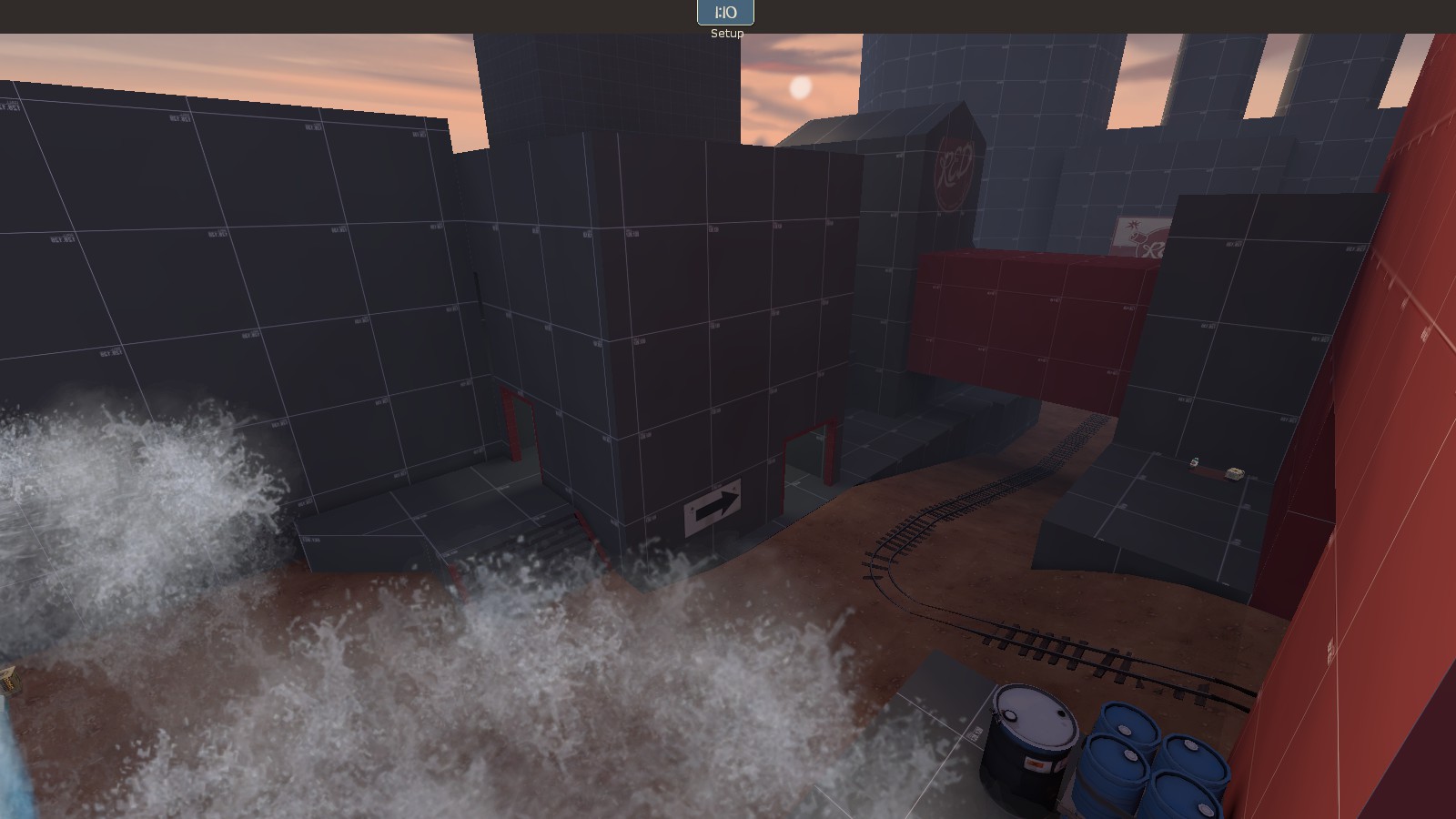 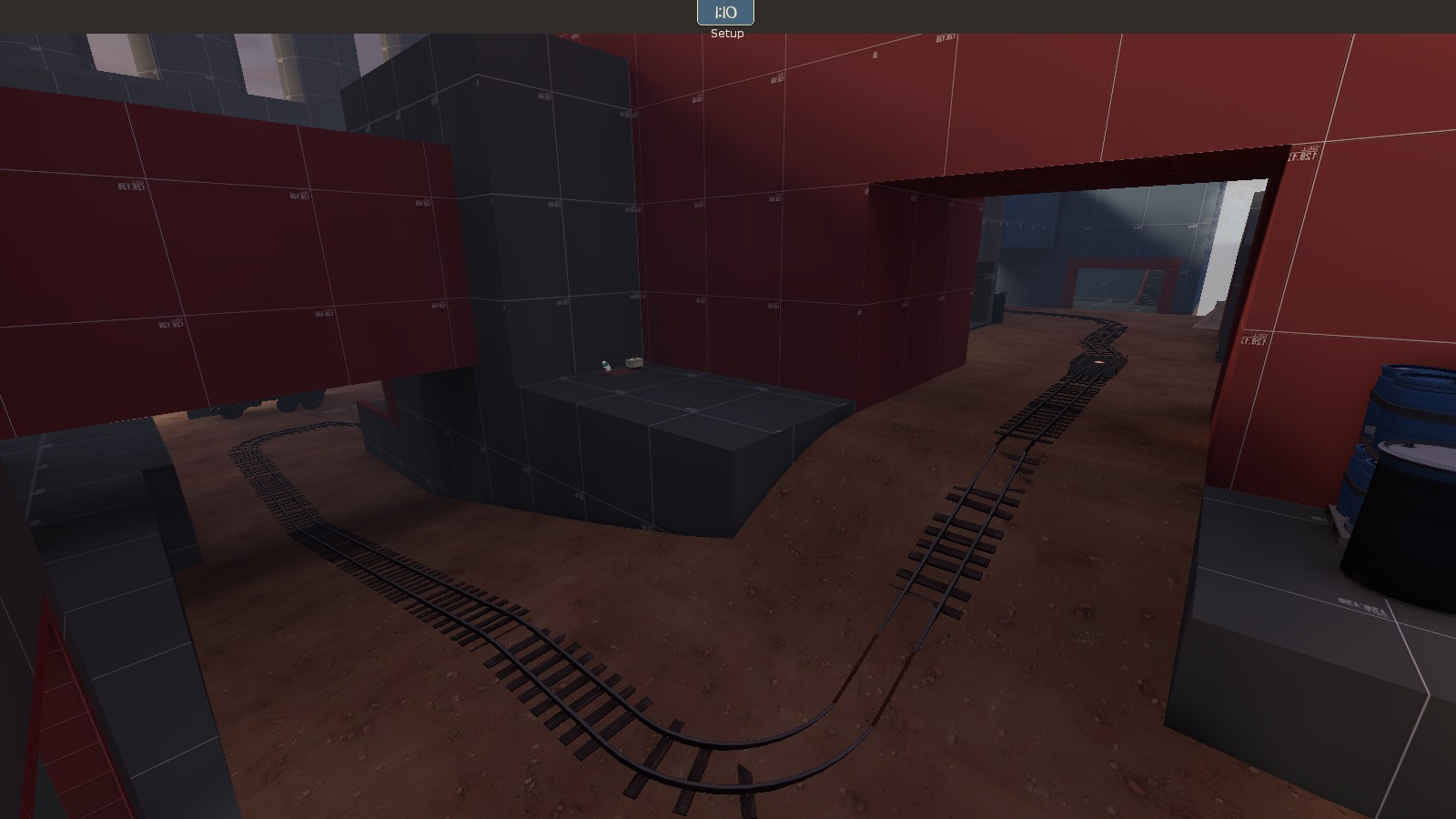 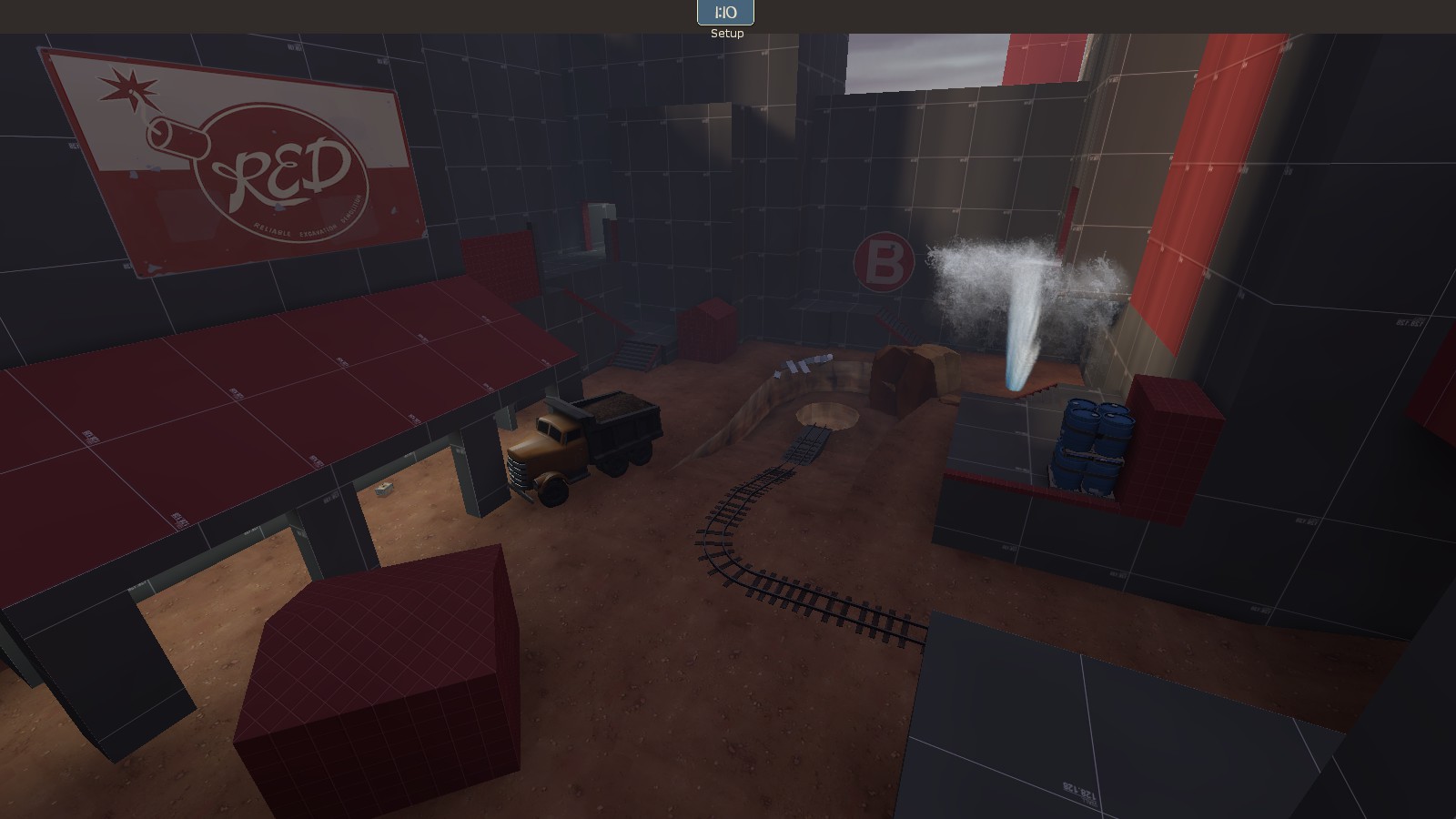 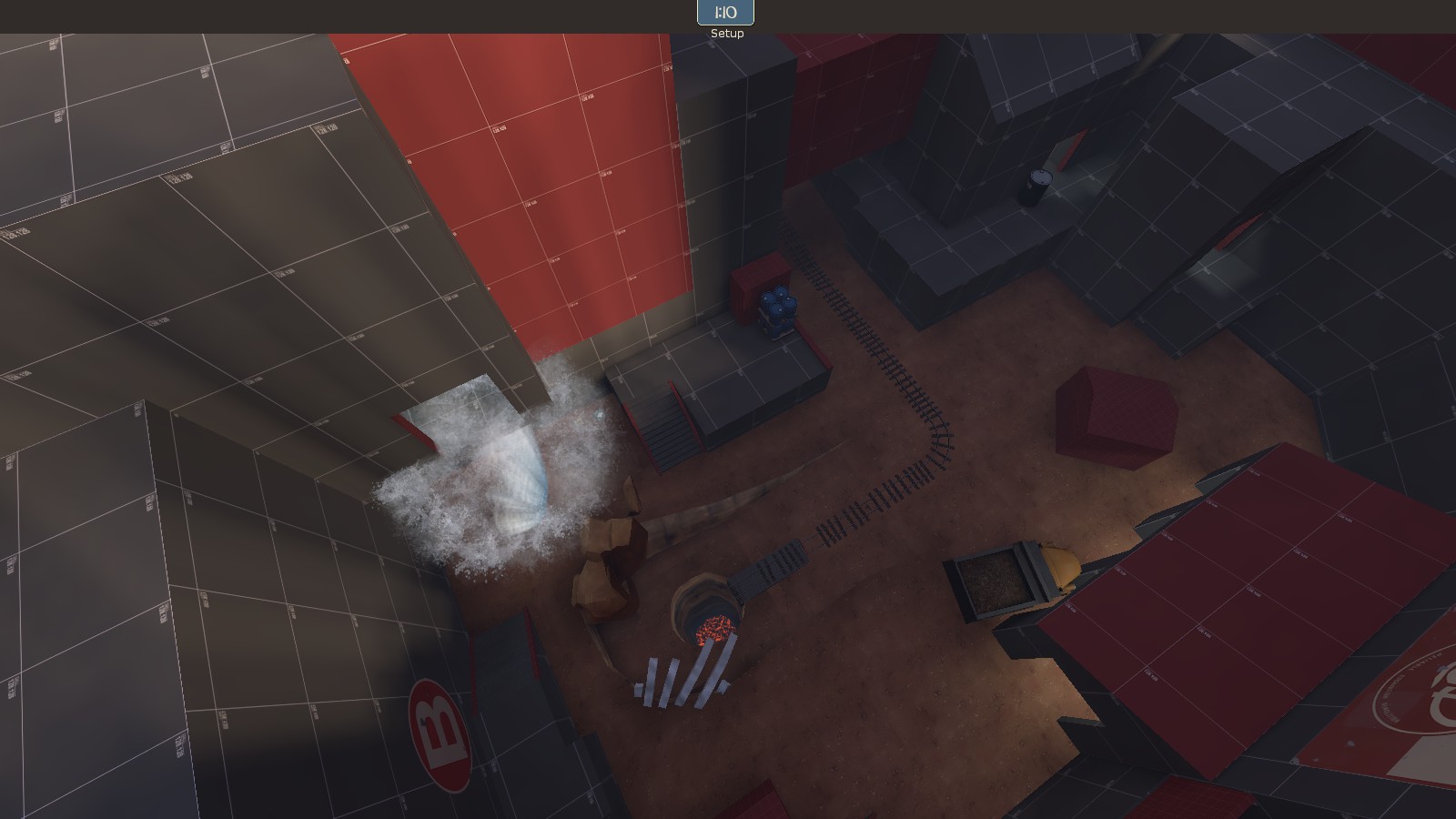 And Overview Screens in Order to Last Point for all of Stage 2: 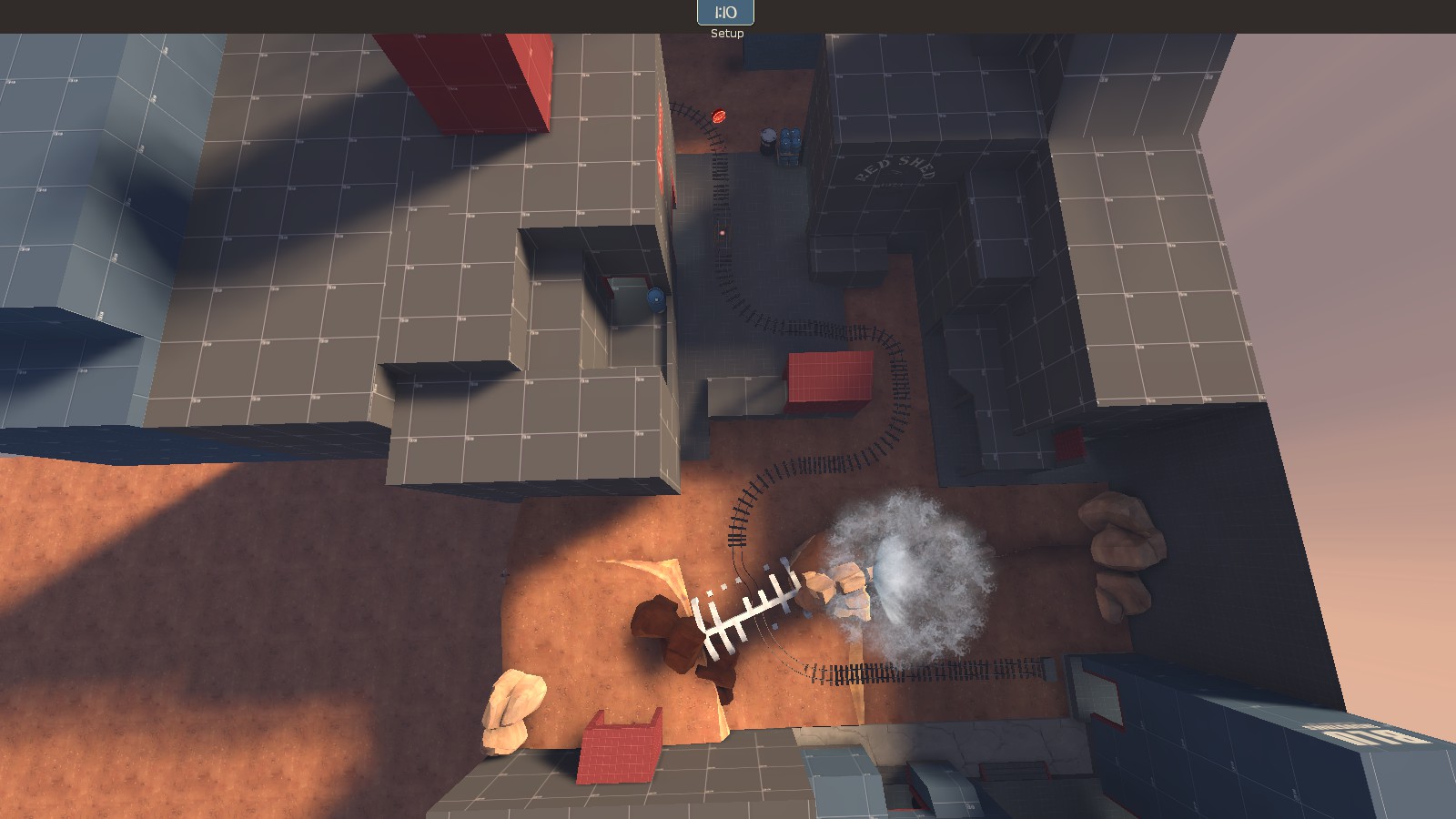 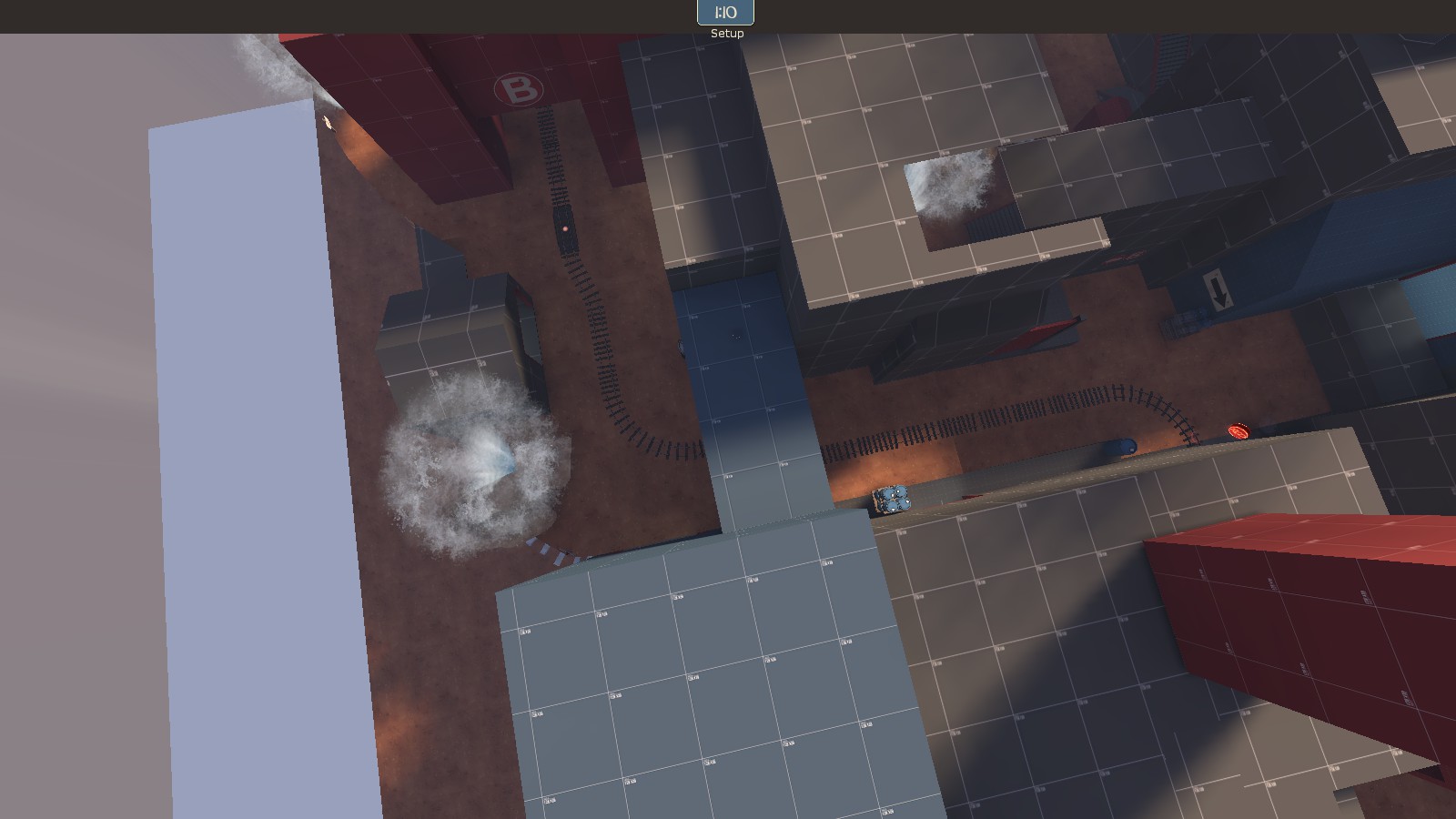 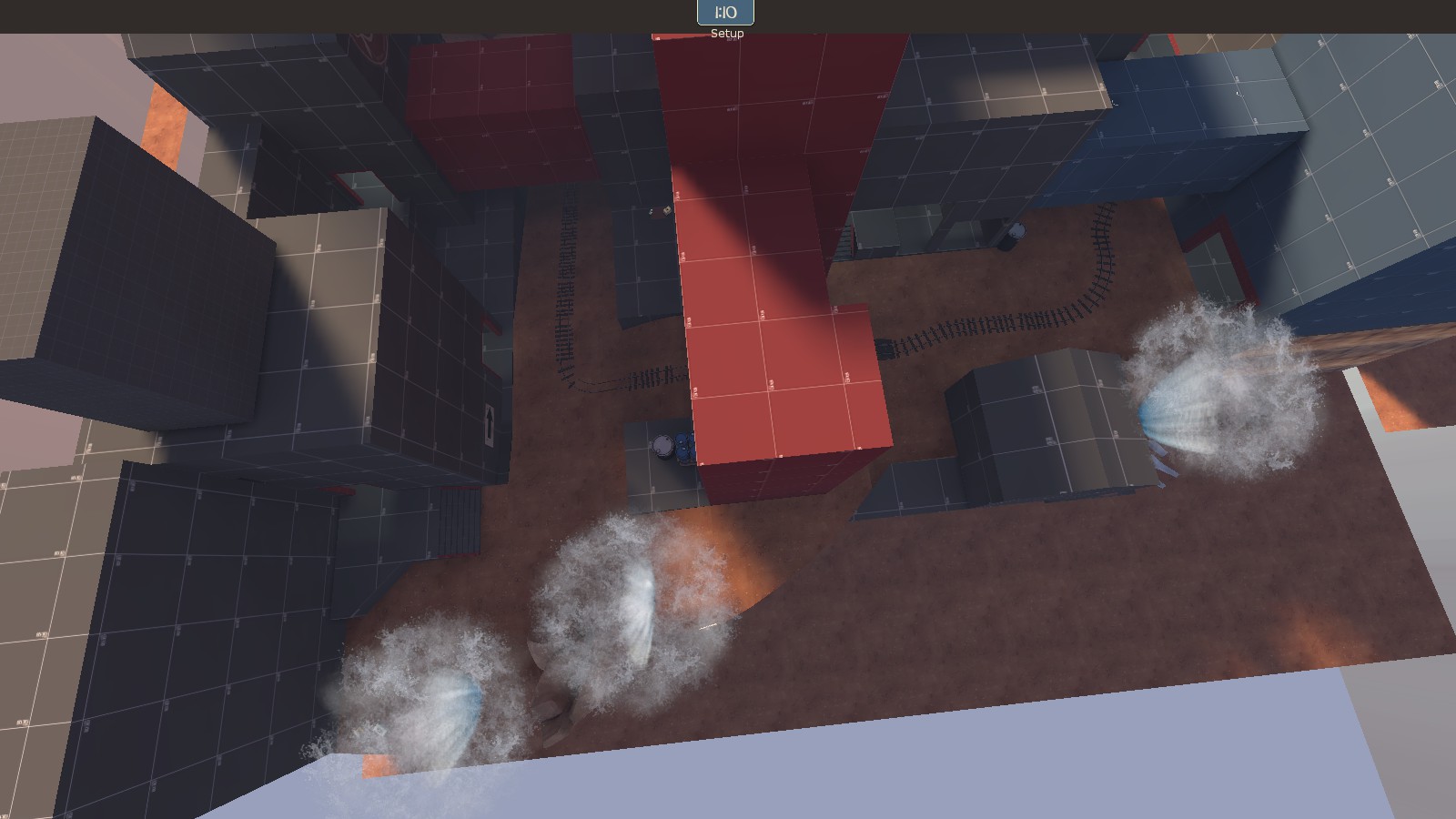 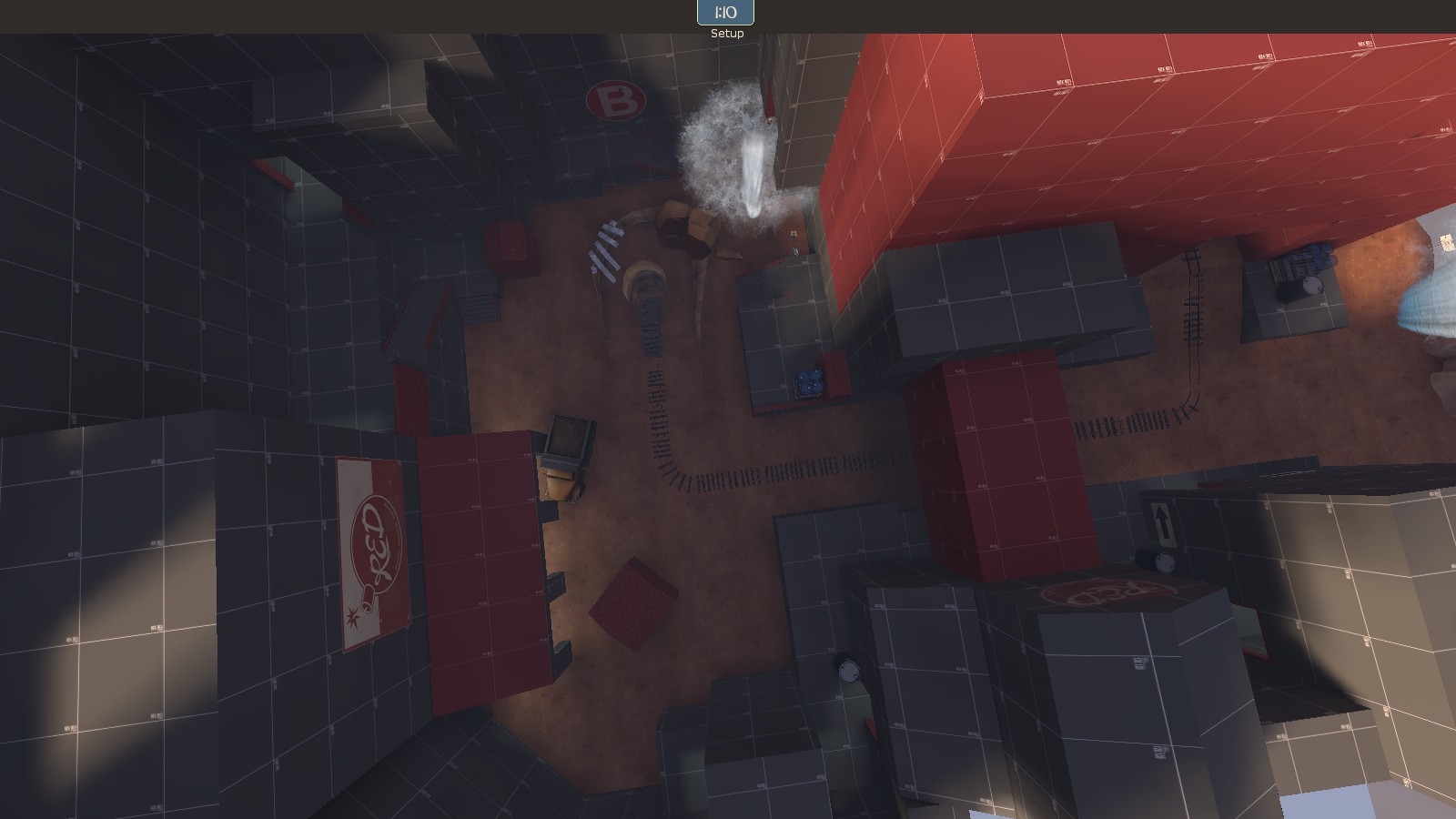 Have a massive dinosaur skeleton come up and eat the bomb.
Toggle signature
I have no nose and I must scream

Zed said:
Have a massive dinosaur skeleton come up and eat the bomb.
Click to expand...

Yes, then play Heavy's nom nom nom sound slowed down while he's doing it.
Toggle signature
He died as he lived.

A5 is finally out after months of work. The final/2nd stage was added which includes about 60% new content plus many updates to the first stage.

Updates to A5 below:
- 2nd/final stage added (two stages, 5 points total.) Map is now complete from a layout perspective (outside of updates from testing.)
- Geysers have been added (can affect gameplay/players.)
- Some structures updated on the 1st stage
- More optimization to first stage
- Cart track/movements smoothed out in some places
- Red building in the first area has been changed to the advantage of red. Front door for blue elimated, platform added with access by geyser
- Gate on 1-2 (on elevated platform) added to open after 1-1 is capped to reduce confusion and players getting stuck on a dead end hallway

Currently testing for optimization of gameplay for both stages has begun and I'm hoping future fixes and updates will roll out on a more regular cadence moving forward.

I'm excited about this version as it is finally the full release as initially intended and we will finally see some of the geysers in action throughout he map. These geysers will be optimized (possibility more) over time as we see how these affect gameplay. Additionally, Boots is at work adding two more geyser sizes and Jukebox has completed many of the main dino-bones that are currently being held as placeholders by brushes in A5 and previous versions. I expect they will be included in near future updates.

Let me know of any feedback so that I can include fixes it in future versions. Thanks.

Some pictures from this update: 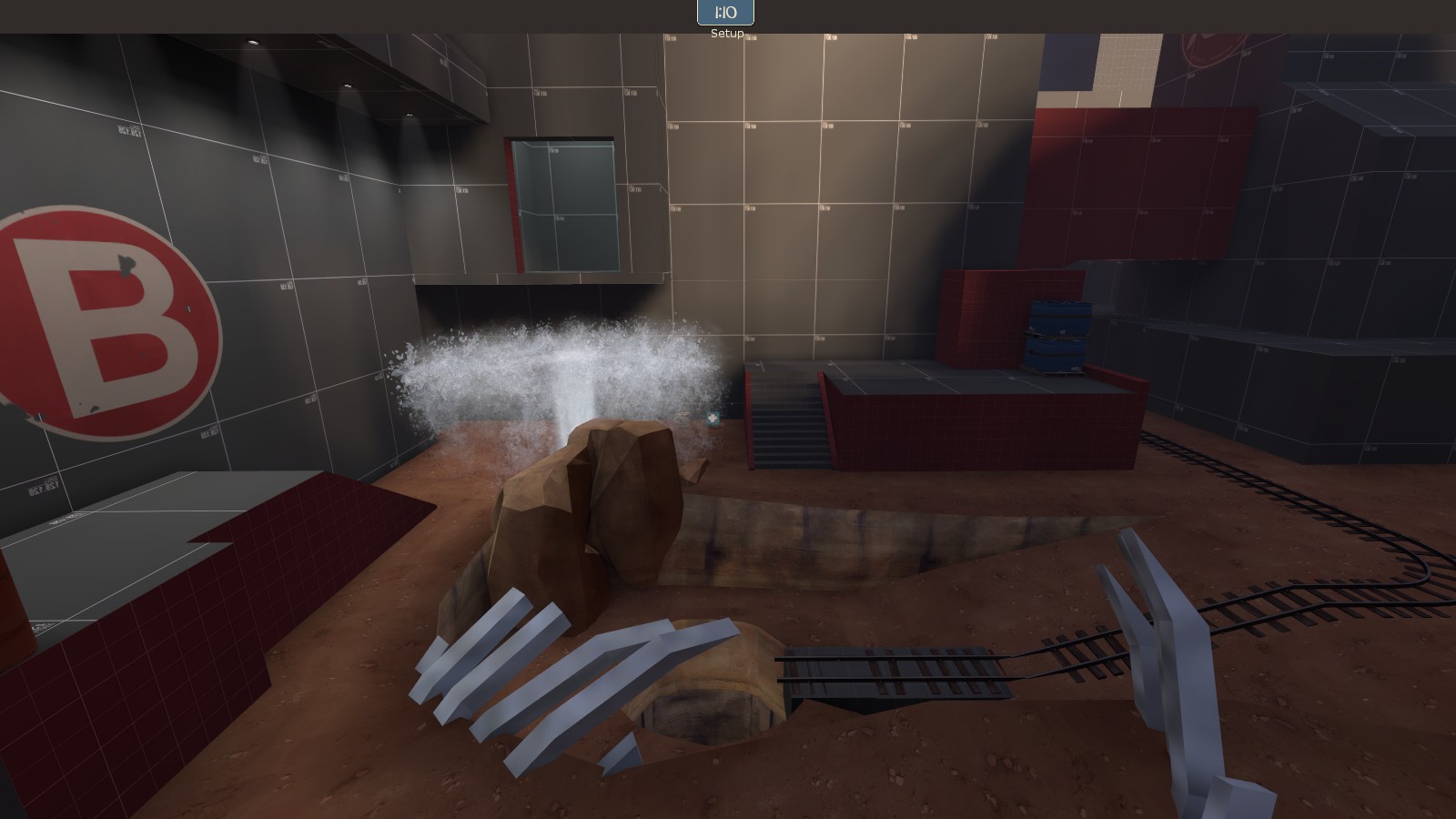 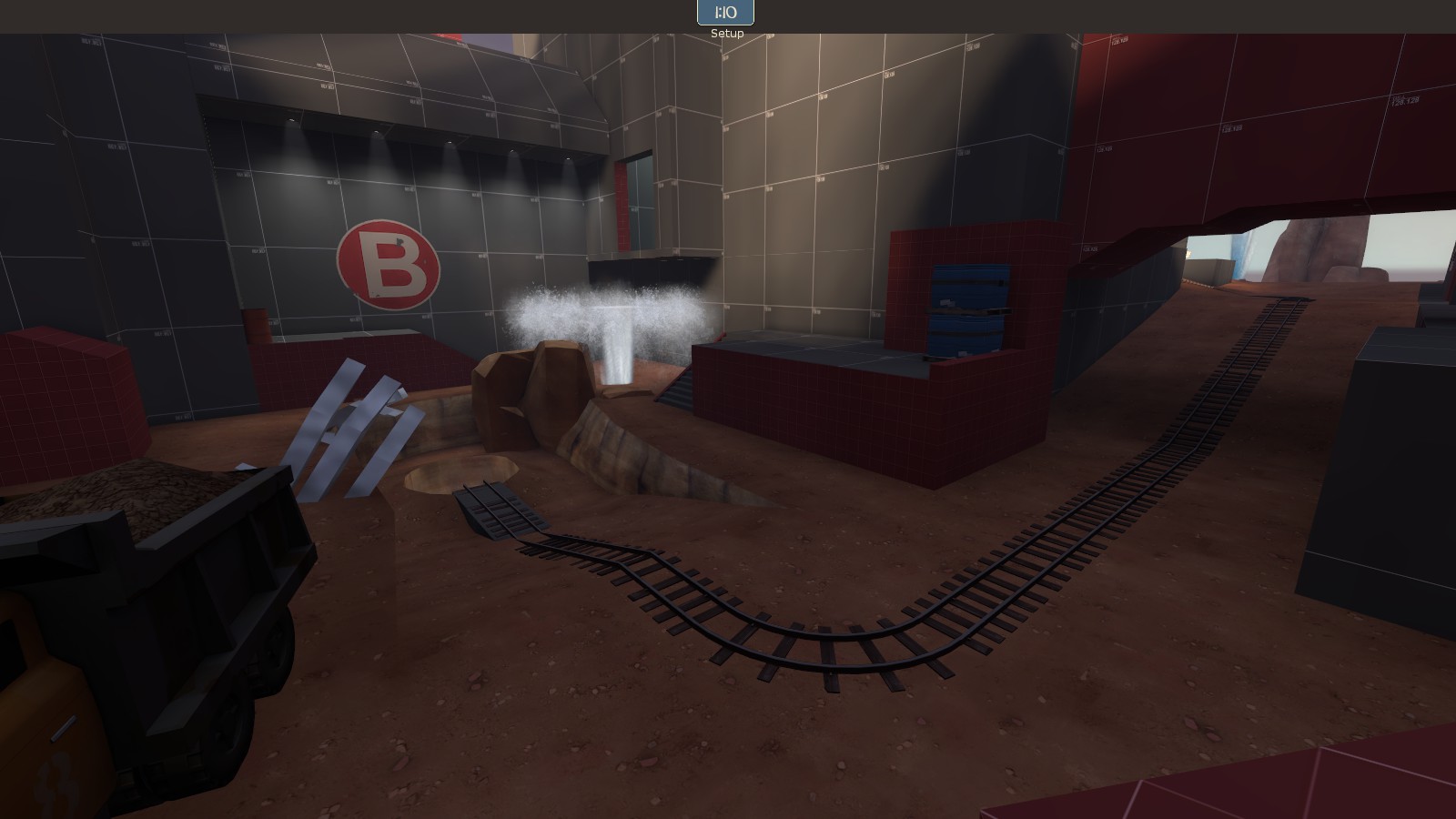 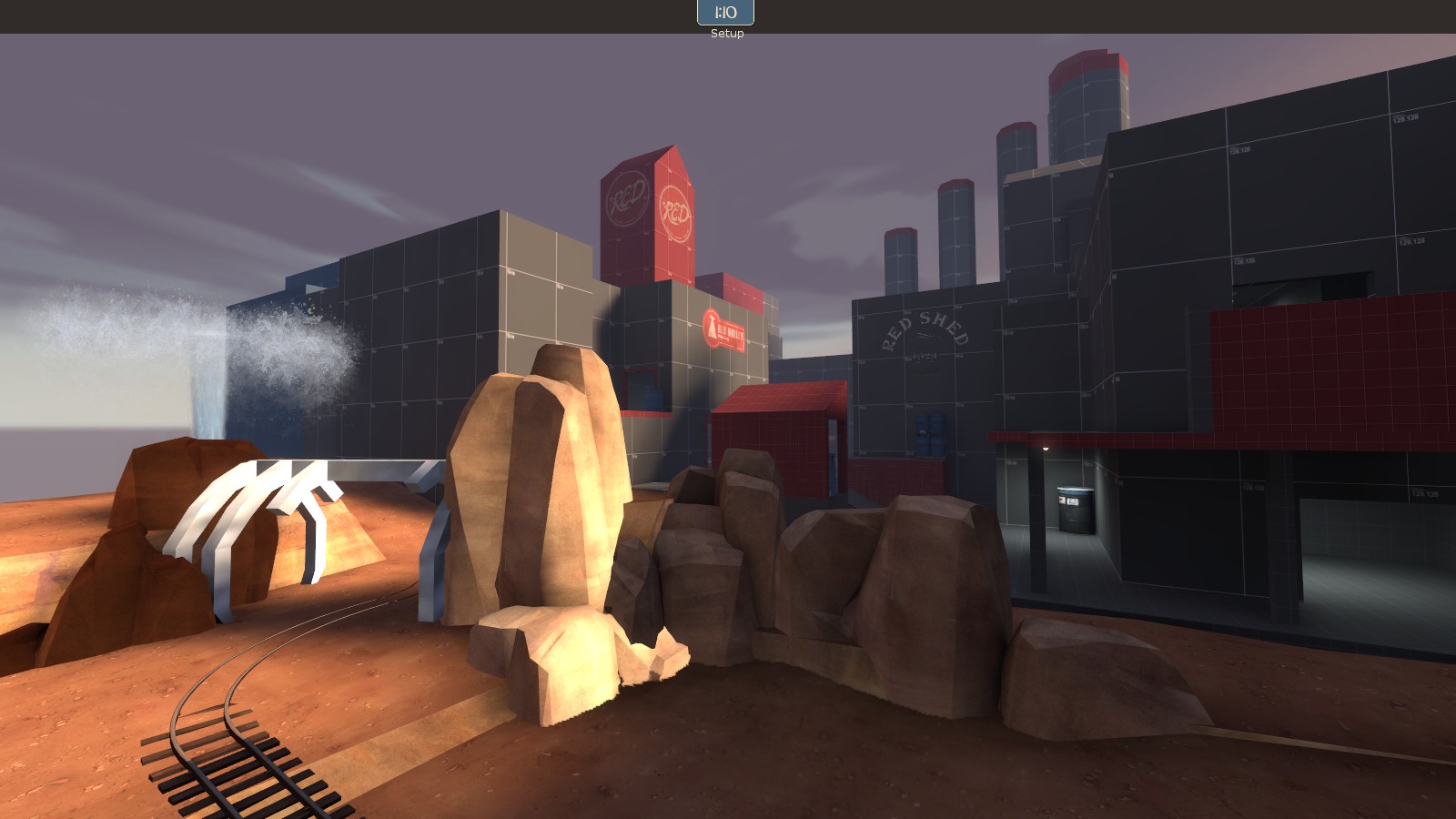 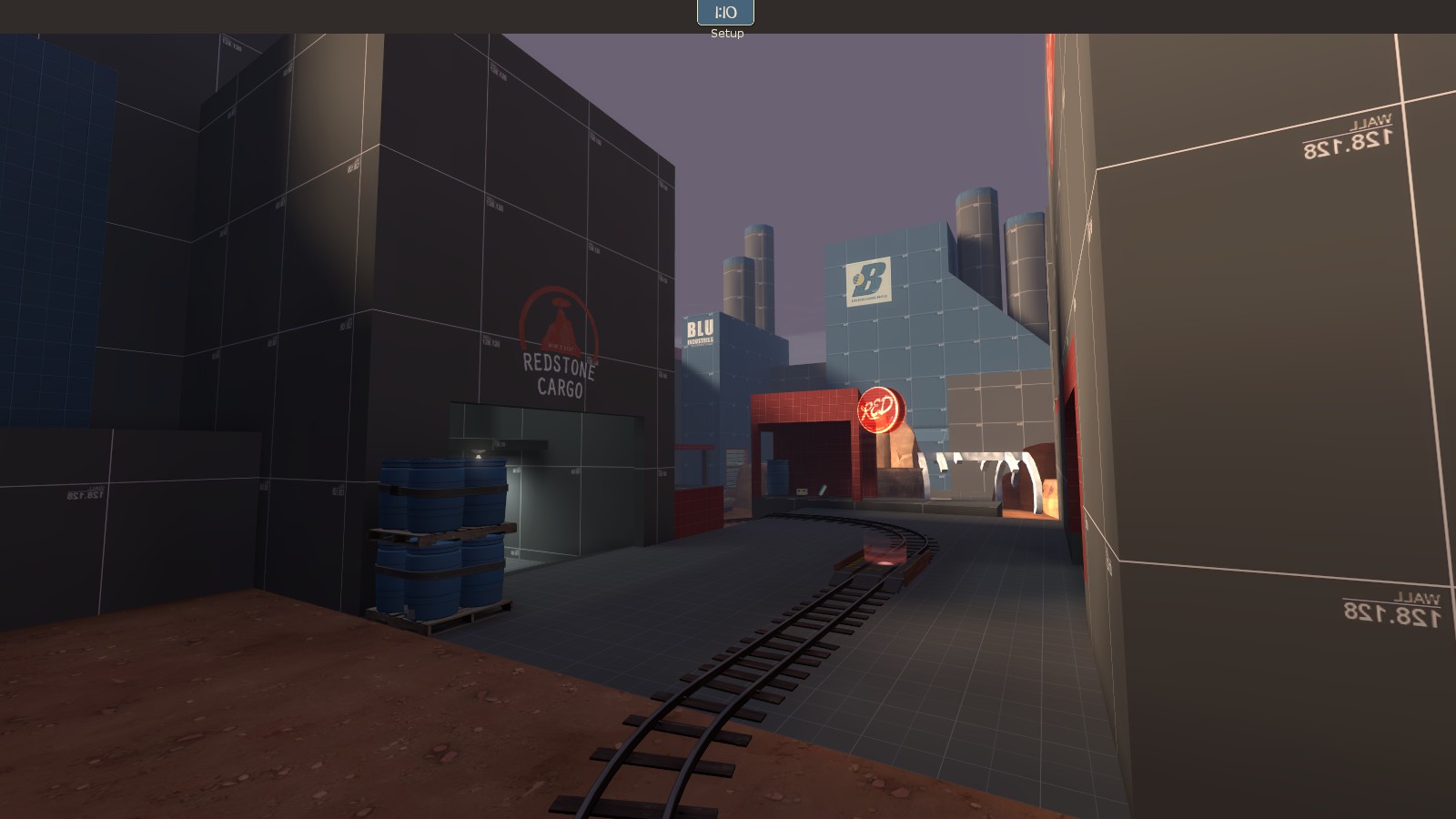 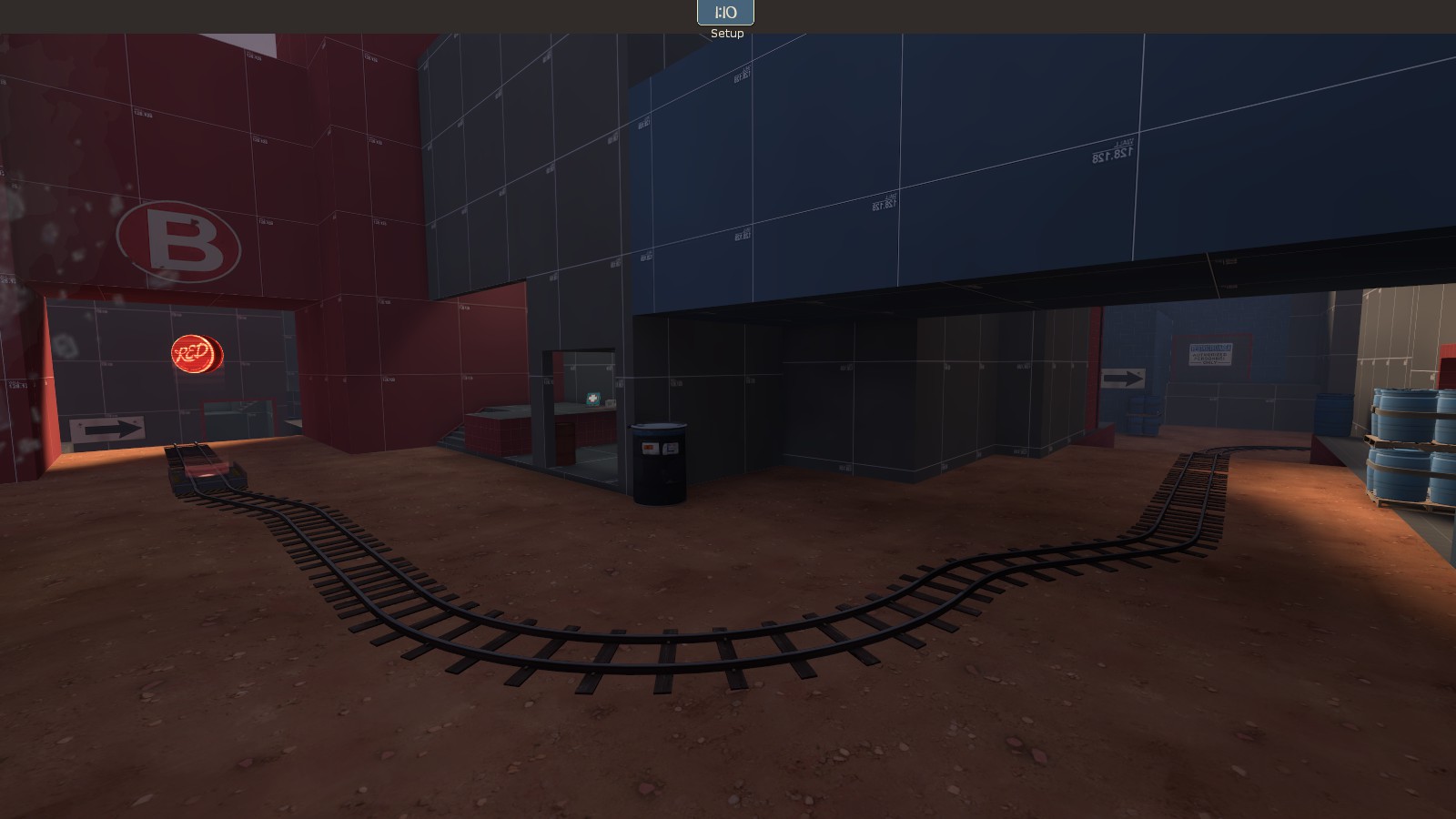