BridgeWorks - A koth map where the point is on a bridge. From the screenshots I can tell that the map has a lot of problems- but don't worry, that's normal

The problems that stick out to me most are that it's very 2 dimensional, and very empty. The height in your map seems to only have two levels; the ground, and the bridge. Compare your mid with that of another koth map- 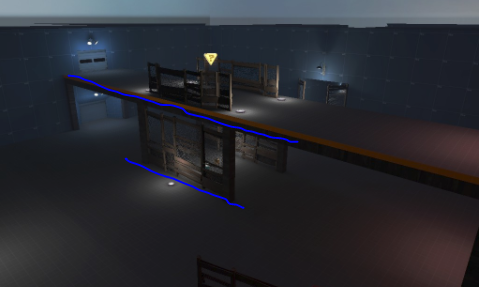 Not only does it make your map much more fun to navigate and fight around, but it gives you a lot of freedom to get creative with cover. the cover on your map is also pretty basic. you have 2 walls, one on each side, for on the bridge and below. it won't be fun to fight on when you're caught in the open because you have no cover to fall back to. In the screenshot of highpass, you can see how every level of height has a piece of cover to counter it. The balconies can be countered by hiding behind the concrete blocks, you cant be seen above the bridge if you're below it, the low ground offers protection against the doors to each side, and the crates protect against players on the control point.

While your map does have some elements of cover, they're much more basic- it's either you're capping the point and doomed to the sightline across both of those doors, or below the point and still open to whatever comes out of THOSE doors- there isn't much safety. Basically, picture being a spy on your map. where would you decloak? the cover isn't even opaque- it's transparent. it would basically be impossible.

And this goes without saying, but a very low hanging fruit is your map is sight line heavy. This can be solved mostly by changing height on the ground like in the example or through more intelligent cover placement - and I use the word intelligent for a reason - your problems won't be solved by placing a bunch of rock props around (which a bunch of people do).

These are all problems with mid alone- I'd probably exhaust myself if I talked about the problems with the outsides of spawns, or your intermediate areas, or how your height is too high to be used. You should still try to get your map tested on the server, and you will be able to see for yourself why players would struggle playing on it for ways that I can't really explain. Trust me when I say you won't see much more than snipers, rocket jumper soldiers, and snipers on your map!

so, while someone might be correct in saying that the map should be scrapped, it's important you know why. It's really really REALLY important to learn from this stuff, or you'll be doomed to repeat the same problems- I hope this helps
Toggle signature
https://steambadge.com
You must log in or register to reply here.
Top Bottom