An FGD Fit for a LORD V3b

Download
You are using an out of date browser. It may not display this or other websites correctly.
You should upgrade or use an alternative browser.
Overview Updates (7) Reviews (1) History Discussion

Hey you! Remember me, that guy that's made only one finished map, which was two years ago and kinda mediocre? Oh yea, I also made that one April Fools map that was almost unplayable due to lag! Now I've made an FGD for TF2, because I'm clearly a professional and I definitely know what I'm doing! Check it out! 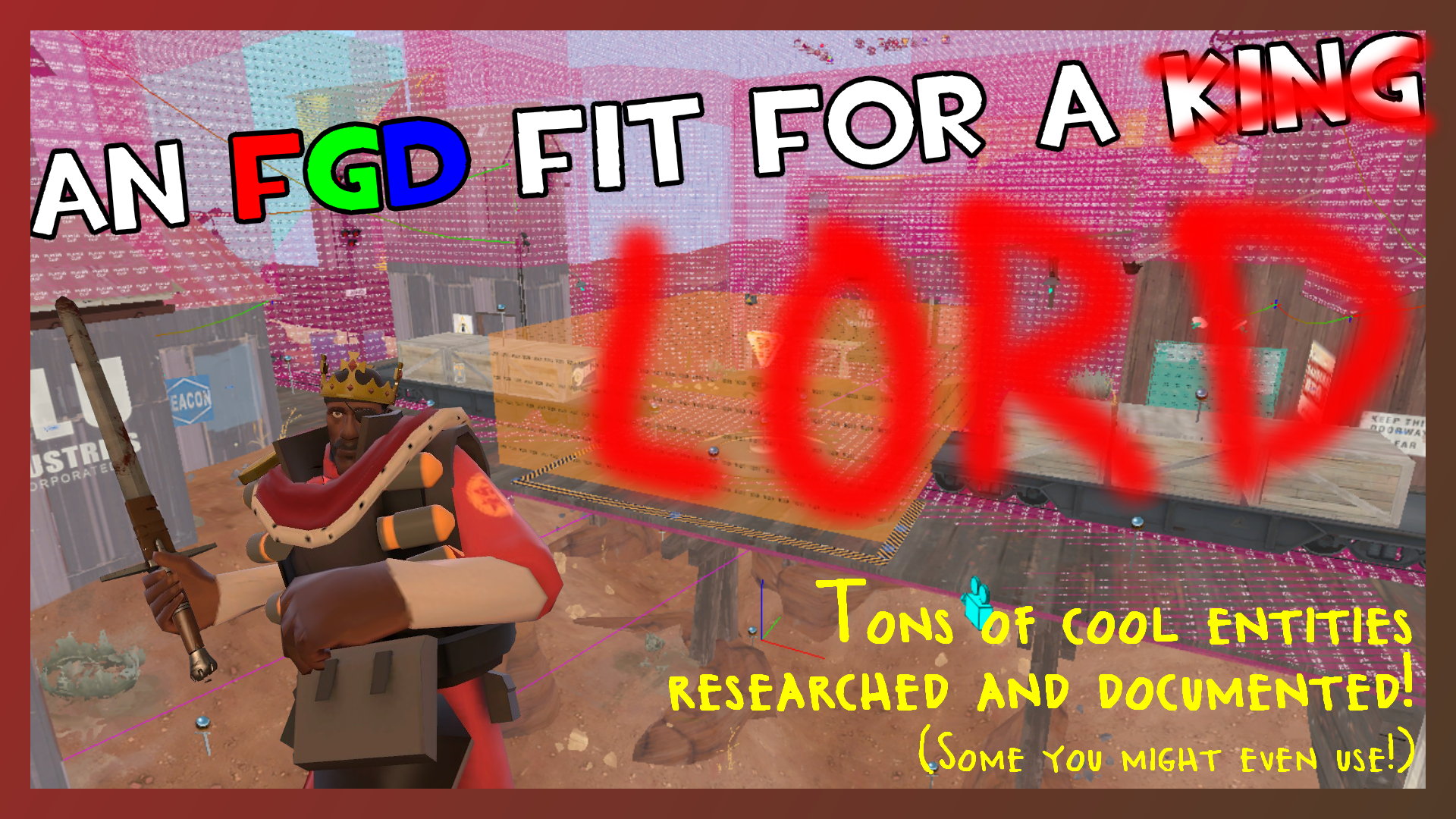 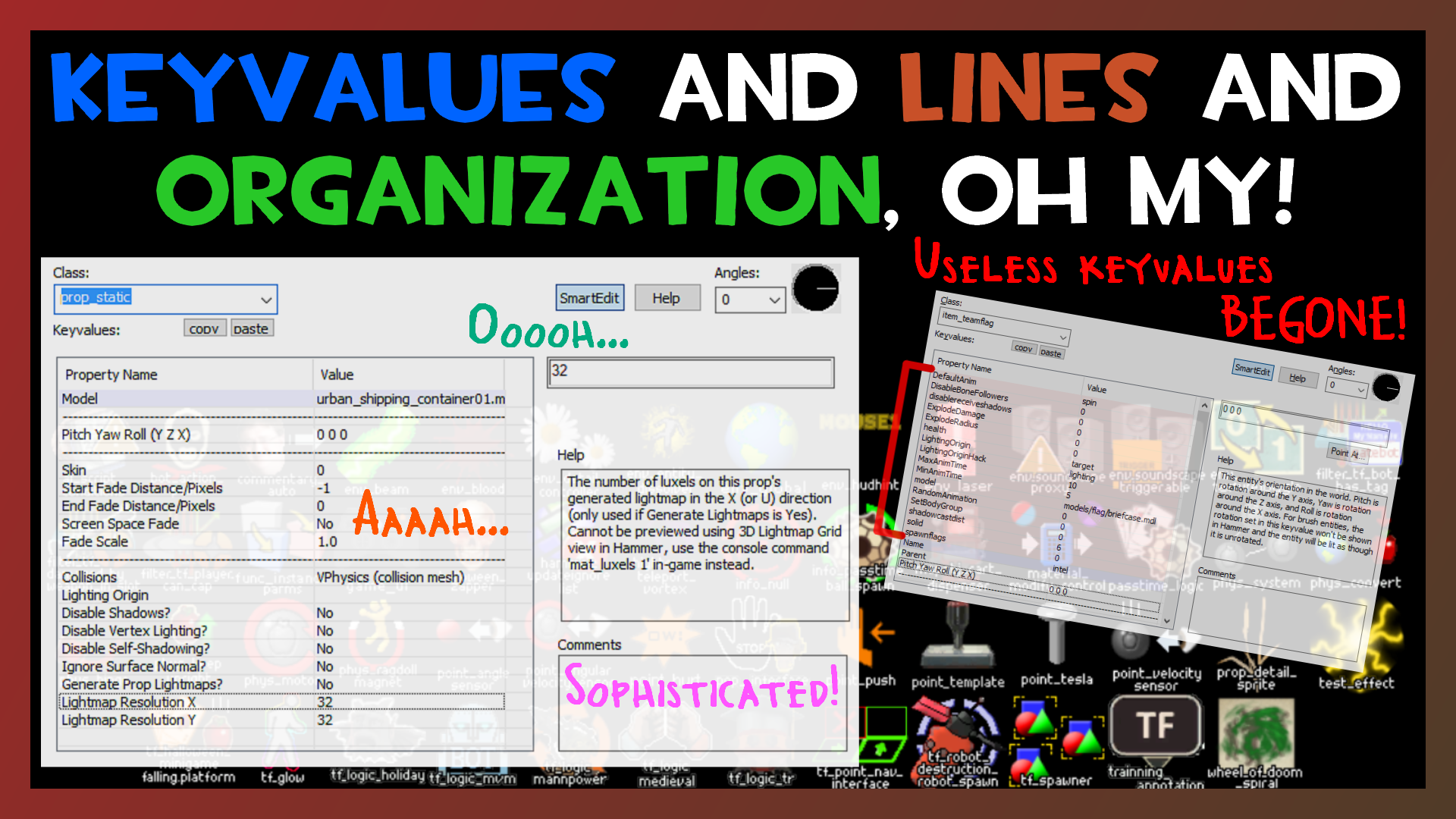 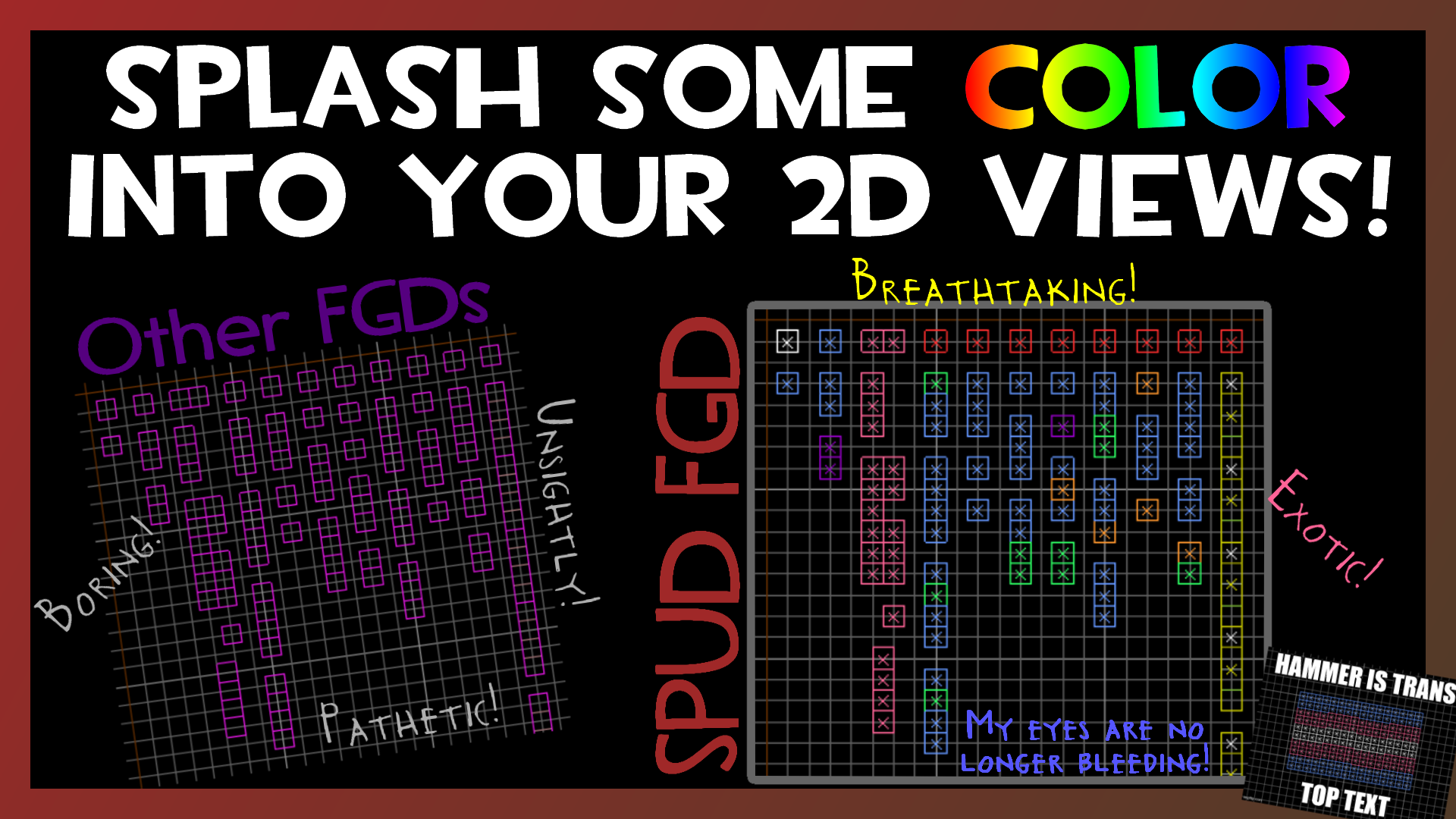 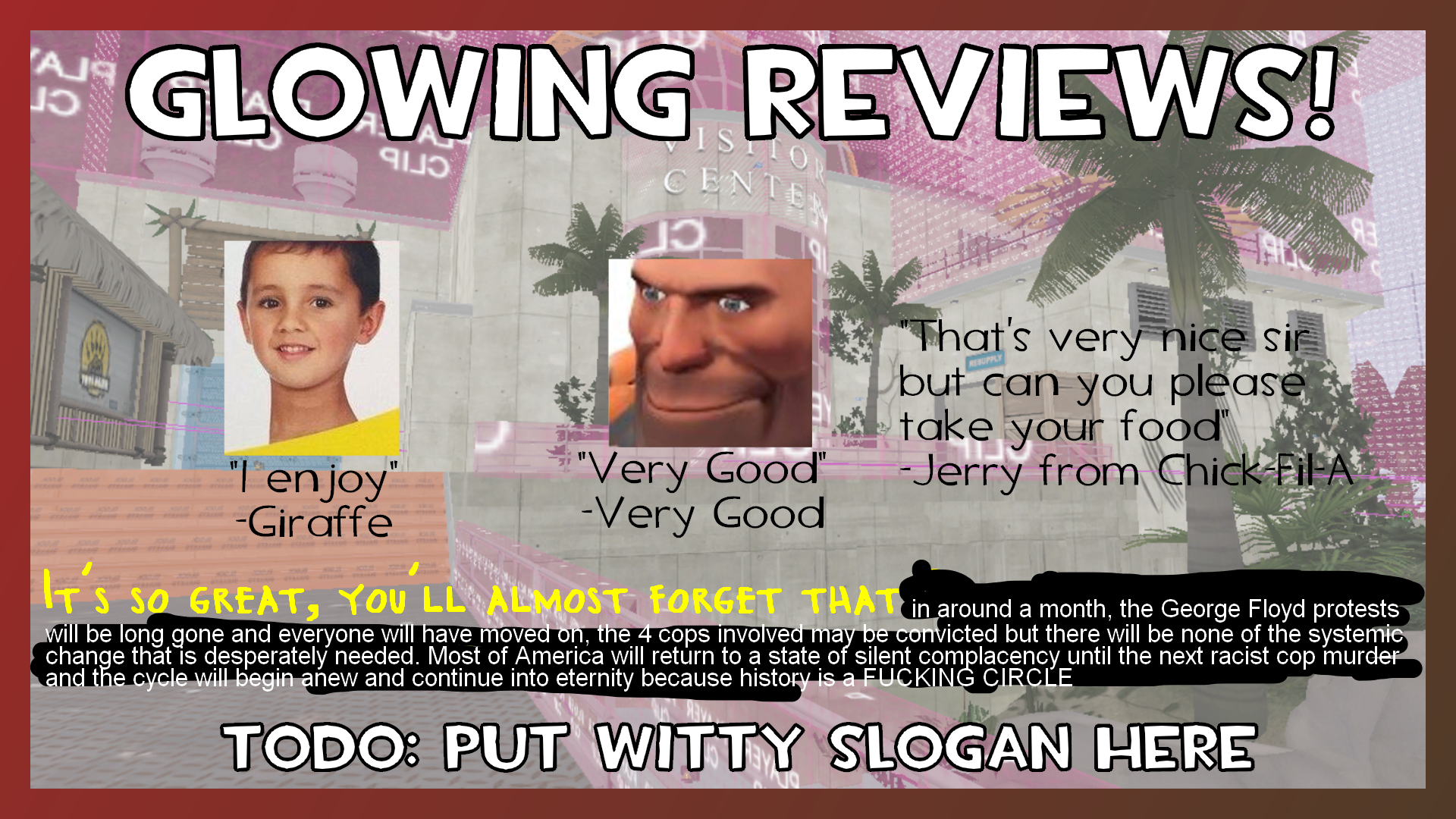 This is a Forge Game Definition file (FGD) for Team Fortress 2, created by Da Spud Lord. All of the information has been taken from other FGDs, the Valve Developer Community, and my own research under the goal of stripping out nonfunctional keyvalues while including and better documenting functional features, including any obscure yet potentially useful features.


Follow these steps to install this FGD and necessary files. These instructions are also listed at the top of the FGD file.
*This exact folder is not required, this FGD file and included folder can go anywhere as long as the relative structure is maintained. The /Team Fortress 2/bin folder is the standard for storing FGD files and where Hammer will first look in when searching for new FGD files, but there is no technical requirement that this folder be used and Hammer can locate FGD files virtually anywhere on your PC. On the contrary, the VPK file MUST go in the specified location; the location of the VPK file is NOT arbitrary.
To change any settings within the FGD file as of Version 3, such as hiding/showing line dividers, open the tf2_spud.fgd file in a plain text editor, scroll down to the "USER SETTINGS" header (line 37), and follow the instructions there.

The keyvalues seen in the "useless keyvalues begone" bit aren't even there normally, did you just change to teamflag from another entity that had these without confirming? False advertising :thinking:

Also I'm personally not a fan of the lines in the entity properties like all these FGDs seem to do.
Toggle signature
Damn good stuff, sir

Izotope said:
The keyvalues seen in the "useless keyvalues begone" bit aren't even there normally, did you just change to teamflag from another entity that had these without confirming? False advertising :thinking:

Also I'm personally not a fan of the lines in the entity properties like all these FGDs seem to do.
Click to expand...

Those keyvalues are from Ficool's FGD, which mine is roughly based on. I removed them because, after testing each individually, I determined they had no functionality.

I realized approximately 40 seconds after publishing the first version of this FGD that I probably shouldn't include version numbers in the filename, since that's just going to make it slightly annoying for anyone subsribed when I release an update... So here's to rectifying that absolutely pea-brained idea. You'll need to change the FGD referenced under Tools > Options after copying it over, but just this once! Last time! I promise! PLEASE! PLEASE FORGIVE MY SINS! I'M JUST A HUMBLE BOY I DONT KNOW WHAT IM DOING AAAAAA (also delete the V1 VPK from your /tf/custom folder so you don't get conflicting icons)
Oh, also I did some kinda noticeable reshuffling of keyvalues so the useful keyvalues are easier to find. You no longer have to scroll past half a Wikipedia article to change the team of an item_teamflag, which is pretty cool I think.

-Fixed various typos
-Updated various entities' documentation to reflect new research/information
-Fixed the obj_dispenser model constantly looping its upgrade animation
-The obj_teleporter model no longer includes the toolbox
-Fixed occluder brushes being teleported to the world origin on map load
-Adjustments to the default settings of some keyvalues
-Reorganized some entities' keyvalues and spawnflags; in entities with lots of keyvalues, more commonly used and entity-specific keyvalues are now sorted to the top
-Large overhaul of BaseClasses and organization
-Line dividers will no longer ever be listed as the last keyvalue in an entity's properties
-FGD version is now listed at the top of the FGD file, and is no longer appended to the end of the file names
-Fixed func_train missing certain keyvalues/inputs/outputs
-Added optional Hammer-only Helper Model options to info_null, info_target, info_teleport_destination, obj_sentrygun, obj_dispenser, obj_teleporter, path_track, point_teleport, and team_control_point
-Fixed the first path_track in a chain not visually connecting to its next paths if it was unnamed
-Fixed improperly sized radius helper on prop_sphere
-Added sentry range helper to bot_hint_sentrygun
-Radius helpers are no longer read-only, so they can be reset in case the mapper accidentally changes them (the value can still be changed via the helper even if the keyvalue is flagged as read-only)
-Extended the line dividers to fill the entire width of the keyvalue list in stock Hammer at the default window size

Thanks for the feedback! I'll be updating the FGD to include these fixes in a few days. One note though: spark_shower does not have an OnSpark output (checked using ent_info in-game, its a very useful console command for this kind of stuff). spark_shower is actually fairly different from env_spark. The rest of these fixes/changes will be implemented.

Also kinda unrelated, but I was scrolling through the source code for env_spark researching how the "Magnitude" keyvalue works and found this comment above the constructor:

Code:
Just... something about the sarcastic energy emitted by this quote was so endearing that I just had to share it.

Version 3: The update I started making out of boredom
Alright, so I know what you're all thinking. "Spud, this FGD looks cool, but I have a violent fear of organization and cleanliness. I'd like this FGD a lot better if I could easily get rid of the line dividers. Like, just by pressing a button. Twice. And I really want that button to be the forward slash key on my keyboard, for some reason." If that was your thought process upon first seeing this FGD, then this is the update for you! And if that was not your thought process, well you might still like this update anyway, so check it out!

-Added a "User Settings" section at the top of the FGD: In this section, certain parts of the FGD can easily be customized by commenting/uncommenting lines of FGD code. Currently available settings are "Line Dividers" and "Pitch Keyvalue in Lights".
-keyframe_rope and move_rope now have identical functionality and can be used interchangeably
-Increased the default "Slack" value in keyframe_rope and move_rope to 50 (previously 25)
-Improved documentation of PASStime entities (Thanks to 14bit for the improved PASStime prefab which I could use for testing)
-Broken/nonfunctional entities are now re-included in the FGD, with a message at the top of their keyvalues list indicating their broken status
-team_control_point now properly lists dynamic model keyvalues, inputs, and outputs
-NPC entities have been updated to follow the keyvalue organization scheme established in Version 2
-Range helpers that are not intended to be changed can now be reset to their intended value using the dropdown
-Removed "Direction to Suppress Air Control" and "Air Control Suppression Time" keyvalues from trigger_catapult, and "<Team> Model Bodygroup" keyvalues from team_control_point, as they have no effect in code
-Removed "Skin", "Body Group", "Hitbox Set", and "Texture Frame" keyvalues from various entities which override these values on spawn or otherwise do not use these values
-Removed "Helper Model" keyvalue from team_control_point
-Removed dynamic model keyvalues from npc_vehicledriver
-Fixed "_DisableUpdateTarget" and "_EnableUpdateTarget" in momentary_rot_button being erroneously flagged as outputs instead of inputs, and added proper descriptions for them
-Updated various entities' documentation to reflect new research/information
-Fixed various missing keyvalues
-Fixed missing line dividers in various entities
-Fixed some entities still having a line divider as their last keyvalue
-Fixed missing fade distance sphere helpers on some entities
-Fixed various typos

Also, while making version 3, I discovered a neat fix for using light_spot in instances, and I dunno where to put it so I'll just put it here: Just set the light's pitch in the Pitch Yaw Roll to the negation of the Pitch override. (If you're using this FGD, you'll need to enable the Pitch Override keyvalue in the FGD's User Settings.)

Version 3a
I spent 4 late nights experimenting with point_viewcontrol because i'm a huge nerd and that's what I do for fun. I'm sure this research will be incredibly useful to mappers and certainly won't go totally unnoticed at all haha

Wanted to point out here and not keep bugging you on Discord.

It also has a single flag: (1) Ignore out of range input values

Version 3b: a random assortment of improvements
For the past 4 months now, I've just been accumulating various changes, fixes, and improvements I've made. Honestly some of these fixes are like... long overdue. So here you go.
...
I hope I'm not forgetting anything. EDIT: I did forget something, I added math_colorblend to the FGD and didn't add it to the changelog. Dolt.

In one of the latest H++ updates, it changes the blank model keyvalue for Helper Models into a cube. This cube covers the logic entities' icons that use the Helper Model, which can be pretty unfortunate.

To fix this, I used model/empty.mdl and placed this directory here in your FGD:

Writing another comment about how I love this FGD and wanted to help update it.

Been meaning to ask but is it possible to add a flag to the point_viewport to affect all players?

Love this FGD, despite some flaws. May I request color_correction_volume (https://developer.valvesoftware.com/wiki/Color_correction_volume) to be added? Despite the warnings it does work in TF2.
Toggle signature
Früher war mehr Lametta.
You must log in or register to reply here.
Top Bottom