A commandline tool for packing maps, written in python

Written in python3, I've aimed to create a commandline packing tool that can be used on both linux and windows. See the README for information on formatting the various config files, for a list of all arguments that can be passed in, and what to do for some errors encountered.

Python3 is required for this to work, however no external libraries are needed.


Features:
Author lists:
Text files can be created, containing authors for assets. These can exist in the program's directory or in asset folders, and support wildcards for assets and folders.

Commandline utility:
As this is a commandline application, it can be called via batch scripts or CompilePal's Custom Step feature. This allows for all elements of your compiling to be done from within hammer itself.
To use with CompilePal, call python.exe with bppu.py as an argument as follows;

Linux support:
Written in python3, with no external libraries used, this can be used by those mapping on linux with support for every feature.

Speed:
One of my biggest qualms with VIDE is the time taken to parse and pack maps. BPPU has speeds comparable to CompilePal's.
A speed comparison for one large map, between VIDE, CompilePal, and BPPU;
(parsing refers to detecting custom assets used).

Manual file/directory inclusion:
FileDirectory lists (FDlists) can be defined per map or for all maps. These allow for manual inclusion or removal of assets, with wildcard support.

Asset listing:
Each asset referenced in the map can be listed, given with its size and location. The status of each asset relative to the map is given as well (if it is packed or unpacked). 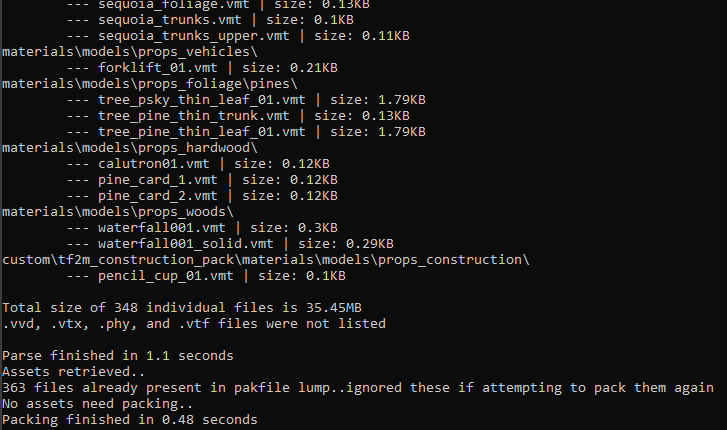 Repacking support will be added in the future.

Thank you to Blank for the extensive testing and help debugging this with various asset types on linux.